Architecture evolves. Some of that evolution has to do with building materials. Other factors have to do with building methods, engineering, evolving human needs, economic elements, climate, geography, population density, security, social norms, and perhaps most of all, simple changes in popular tastes effecting ideals of architectural beauty. Nowhere is this evolution so clearly drawn as in cave architecture. Caves haven't changed much in the tens of thousands of years during which they've been used for human habitation. The fact that they're still used today for human habitation has more to do with these changes than any of the other factors mentioned above. Humans have long survived on this planet by adapting to their environment. But then, eventually, they flourish by adapting their environment to their chosen lifestyles. That, in a nutshell, is the history of cave architecture.

Curt Sleeper and his family of Festus, Missouri, live in a true cave house (above), which offers a near perfect contrast between the two types. To start, Curt is not an architect, and he did all the work himself, on a tight budget, recycling when possible. Starting in 2003, Curt and Deborah Sleeper with their children, converted a 15,000 square foot cave in Festus, Missouri, into a fantasy abode having three bedrooms, a 400 square-foot kitchen, a skating rink (the cave's former use), with both geothermal and solar heating. The property's 2.8 acres has three freshwater springs and (during the rainy season) some fourteen waterfalls. The home has three chambers. The front chamber houses three bedrooms, the middle chamber is a party area, while the rear chamber is where many bands used to perform. During the summer, the house is naturally cooler than other homes in the region but also more humid, requiring dehumidifiers. A spring in the cave provides 100 gallons of water per day.

From quite wet to quite dry, cave dwellers have not always sequestered themselves in cavernous holes in the ground. Mesa Verde, (Spanish for green table) National Park offers a spectacular look into the lives and cave architecture of the ancestral Pueblo people who made their home for over 700 years beneath massive sheltering cliffs. Though this might stretch some people's definition of "cave" it's actually an important example of the "adapt and adopt" history of such architecture mention before. And lest you think that all modern-day cave dwellers must put up with dark, dank, gloomy interiors, how would you like waking up in the morning to a cool dip and the magnificent view seen below? Many cave houses feature manmade pools, but this one appears to be natural--no filtration needed, but a water heater might be nice. 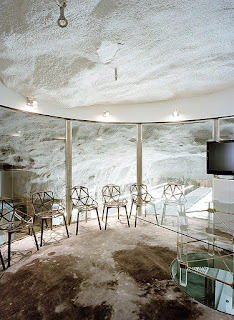 Of course, there are all kinds of caves. Some are even manmade such as the "office" cave seen below in Sweden, built deep inside a WW II storage bunker. As seen at left, the office even has a view (sort of). Fred Flintstone, eat your heart out. This work environment underlines one of the most important con-siderations a cave architect must contemplate--light. And lest you think we're talking here exclusively about electric lighting, some inhabited caves feature natural or manmade sky-wells allowing light from above into the dark interior. Even at that, however, an electrical generator is practically a "must" for any realistic endeavor at cave dwelling. Fiery torches dipped in tar went out of style a number of years ago. Also, as mentioned before, proper ventilation, plus one or more dehumidifiers running 24/7 constitute additional disadvantages of living in any underground environment.

When we in North America think of caves we think in terms of dense limestone, granite, or other types of hard substances. However, in southern Europe, along the Mediterranean, the hard, unforgiving rock gives way to porphyry. Though it's easy to carve, it's not all that easy to live with. It crumbles at the touch almost like so much sugar. That's advantageous in terms of carving and adapting such caves to human activity, but it also demands special attention to the surface. Such caves are quite common on the island of Santorini. A certain technique that the Santorinian people have long used in house building is the application of mud on the walls along with some small parts of red rocks that are added for the reinforcement of the mixture. Sometimes they even use pressed cement with red or white color to cover all floors and surfaces of both internal and external spaces. The "before and after" images below illustrate the profound effect this "sealing" has on the natural rock as well as the differences in cave dwellings here and over there.

The two images below provide a further glimpse of the natural surface, left untouched, and that of a room that has been "plastered." The photo on the right also demonstrates the profound difference a natural light well from the outside provides in warming the interior both physically and visually. One might say it's the difference between night and day.