It's no secret that Steven Spielberg is my all-time favorite filmmaker. I've written regarding two other Spielberg films Jaws and Schindler's List, and will probably cover Saving Private Ryan, and Close Encounters of the Third Kind someday. Those four, taken together with his E.T. the Extra Terrestrial, would tend to round out top five on most critics' list of Spielberg's best movies. Although E.T. might not top that list, it's my favorite on so many different levels I would at least deem it the most "watchable" of the top five. As with any movie effort, regardless of the director, the final product is a team effort. Some might call it "art by committee" and indeed, that are any number of films, some by outstanding Hollywood icons, which would very easily fit that bill. But none of Spielberg's films fall into that category (even his sloppy attempt at comedy, 1941). E.T. began in the mind of screenwriter, Melissa Mathison, germinated in Spielberg's fertile imagination, took shape in the work of special effects genius, Carlo Ramaldi, and came to life on screen with the touching pathos of a brave little boy of ten--Henry Thomas.


Quite apart from a fascinating script, and an enchantingly ugly, but strangely lovable alien creature, Spielberg's tact in selecting and directing talented children was the magic ingredient that made E.T. work. Here he had three to deal with, Henry Thomas, ten, seven-year-old Drew Barrymore, who played Elliott's prankish little sister (age five in the movie), and fifteen-year-old Robert MacNaughton cast in the role of Elliot's older brother, Michael (below). Though all three had worked "in the business" before, none had much in the way of acting experience. (How could they at their ages?) The cast was rounded out by Dee Wallace as the kids' recently divorced mother, and an un-named scientist simply known as "Keys" played by Peter Coyote.
﻿
Carlo Rambaldi (below), who had designed the aliens for Close Encounters of the Third Kind, was hired by Spielberg to design and build E.T. Its face was said to have been inspired by those of Carl Sandburg, Albert Einstein and Ernest Hemingway. Producer Kathleen Kennedy had the Jules Stein Eye Institute create E.T.'s eyes, which she felt were particularly important in engaging the audience. Four heads were created for filming, one as the main animatronic and the others for facial expressions, as well as a costume. Two dwarfs, Tamara De Treaux and Pat Bilon, as well as 12-year-old, Matthew DeMeritt, who was born without legs, took turns wearing the costume, depending on what scene was being filmed. DeMeritt walked on his hands and played all scenes where E.T. walked awkwardly or fell over. The head was placed above that of the actors, who could only see through slits in its chest. E. T. was created in three months and set back MCA and Universal Studios a cool $1.5 million (ten percent of the picture's budget). Spielberg declared it was "something only a mother could love." Though M&Ms were originally intended to be the candy bait in luring the alien creature inside, the Mars candy company found E.T. so ugly that they refused to allow their product to be used in the film for fear the creature would frighten children. This allowed their competitor, Hershey, the opportunity to market Reese's Pieces. (Hershey's profits rose 65% as a result.)

E.T. was filmed roughly in chronological order, mostly for the benefit of the children. Spielberg felt this would give them a better feeling for the story's progression and their character development as actors while allowing them to gradually bond with the movie's extra-terrestrial star. Spielberg had originally offered the picture to Columbia, who looked at the script and deemed it suitable only for Disney. Spielberg found a more welcome reception at MCA who agreed to fund the picture for a total of $10.5-million. The film eventually grossed just under $792-million, making it, for a time, the highest grossing picture ever. It was later surpassed by Spielberg's own Jurassic Park some eleven years later. 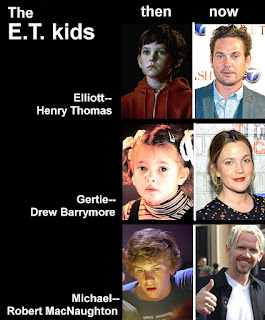 E.T. was shot at a rather blistering rate--only sixty-one days (it was originally scheduled for sixty-five). Considering the youthful inexperience of his cast and Spielberg's past luck with animatronics (as in Jaws) this feat alone was somewhat remarkable. There was also an air of great secrecy surrounding the filming, done under the cover name of A Boy's Life. The script was kept under lock and key with the actors allowed access to each scene only on the day of shooting. Spielberg was highly fearful of plagiarism and piracy. Indeed, he himself was accused of plagiarism and, despite his precautions, is said to have lost millions as a result of newly developing forms of video piracy. The film was previewed at the 1982 Cannes Film Festival to excellent reviews, then released in June of that year, making back its cost during just the first week. Then it went on to remain number one at the box office for more than seven weeks.

E.T. the Extra-Terrestrial is something of a spiritual auto-biography of a suburban boy with an uncommon, fervent imagination. References to Spielberg's childhood occur throughout the film as seen in the sibling relationships of the children. Other writers have focused upon the similarities between Elliott and E.T. while still others mention similarities to Peter Pan and The Wizard of Oz. Andrew Nigels went so far as to compare E.T. to Jesus, describing E.T.'s story as "crucifixion by military science" and "resurrection by love and faith." It's obvious that Universal Pictures appealed directly to the Christian market, with a touching fingers poster reminiscent of Michelangelo's The Creation of Adam. Spielberg found the Christian comparison amusing in that he's Jewish.