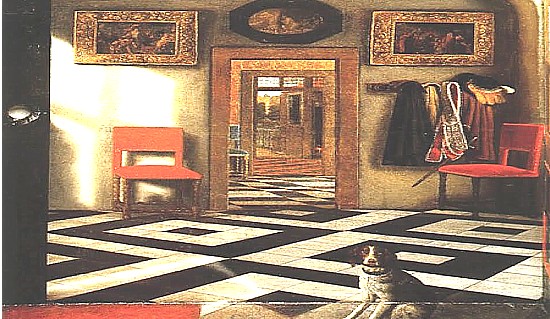 If someone suggested going to see a peep show you might be at least somewhat shocked. You might picture a seedy part of some big city with triple-x theaters, porno shops, and even houses of prostitution. You'd probably be even more shocked to arrive at an art museum such as London's National Gallery to see the peep show. And when you actually saw it, your reaction would probably be a mixture of laughter, embarrassment, and dismay that you'd been duped into visiting a museum just too peer through a tiny hole in an antique wooden box to view...nope, no naked ladies (or gentlemen), but what appears to be a sparsely furnished 17th-century domestic interior (above).

Actually, what you'd be seeing would be a quite rare and thus a quite valuable oddity, for the most part peculiar to Dutch art history. By rare I mean there are only six surviving exam-ples, the best one built by the Dutch painter and expert on two-point perspective, Samuel Dirksz van Hoogstraten (ab-ove), or a somewhat less pre-cise example also by a Dutch painter, Pieter Janssens Elin-ga (left). There's also a mod-ern-day model created by the American painter, Jimmy San-ders in his Florence studio depicting his Florence studio (below).
Although they were originally known as peep shows, the correct term for such an item is a "perspective box." And before you start construction of a wooden container to build one of your own, you'd damn well better know two-point perspective forwards, backwards, up, down, and upside down. Everyone knows a box has six sides and most artists would have little trouble drawing one using two-point linear perspective. However in this case, the artwork is not of the box but inside the box. And even though, in peering through the peephole, you can usually only see five inside, surfaces (except if there are two peepholes), each one must be drawn, painted, and lit to minimize the natural inside corners of the box so as to create the illusion of a room and (the hardest part) its contents. Dutch painters during the 16th and 17th-centuries were quite "in love" with perspective, but even at that, it's little wonder such painted oddities are so rare; few artists then or now could handle the extreme complexities of multiple surfaces and the foreshortened perspective they demand.

If all the paintings seen above seem to somewhat less than fool-the-eye illusions, keep in mind that for a perspective box, to render anything approaching an accurate presentation, the inside must be seen from one or two specific angles (holes in opposite sides of the box, and have precise lighting. In the photo of van Hoogstraten's version in use, one hole is on the left side of the box with a second one on the right. One entire side has been removed to allow a bright light to illuminate the interior. From any other point of view other than those intended by the artist, the illusion is lost, or crude at best.