I suppose there's several instances of street art from the 20th-century, or even before, but it seems to me that such artwork, as we know it today, is quintessentially 21st-century. Street art grew out of urban graffiti, which most people would agree takes far too much stretching of the definition to be considered art. Thus, it's hard to say precisely when and where street graffiti became street art, probably, as Picasso once suggested, when people started buying it ("Art is anything the public will buy"). That would be about the time New York City graffiti artist, Jean-Michel Basquiat and others, began displaying on the hallowed wall of that city's SoHo district around 1980; which would be about a decade before the Paris street artist, Charles Leval, was even born.
Charles Leval goes by the name Levalet. He was born in Epinal (northeastern) France. He grew up in Guadeloupe, one of the Leeward Islands, part of the Lesser Antilles in the Caribbean where he came into contact with urban culture and later with the visual arts. Levalet trained initially in Strasbourg (eastern) France, where he studied painting and an-imation. He began to develop a style which focuses on an interaction between the subject of the artworks and the environmental space they’re in. Levalet considers urban art as part of the identity of the city.

Levalet likes to explore the architectural diversity of Paris, with its alleys and passages which create an intimacy with the viewer. A lot of thought goes into location too, as each piece visually interacts with its environment in one way or another. His dry sense of humor is never far beneath the surface. Architecture supports his work. Then he stages his artwork with photo-graphs. Levalet's work is, basically an installed drawing. He draws his characters in Indian ink in the public space much like a game of visual and semantic dialogue with the environment. His fig-ures interact with the architecture and involve themselves in situations sometimes bordering on the absurd as seen in his Brooklyn street art (above). 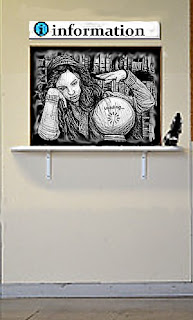 Street art has had a huge upswing during the 21st century and we’ve truly seen some rather astonishing pieces adorn the streets of cities throughout the world. Levalet's work began appearing on the streets of Paris around 2012. He has since displayed in numerous exhibitions and several solo shows, as well as participating in international meetings of street artists like himself. Born in 1988, at twenty-nine years of age, Levalet is still quite young for a full-time pro-fessional artist, though not so young as street artist go.

Levalet averages about twelve to twenty street art installations per year, but he does not limit himself only to the streets of Paris. At some exhibitions his work can be seen both on the street and in a gallery setting. His Information (above, left) is one such piece. Levalet sells limited edition prints and photos of his street art as well. The Fall (above) is a variation of a street art image.
﻿