Back in the early 1970s as I was working on my masters degree at Ohio University, I wrote a thesis tracking the development of ideals of feminine beauty through the work of three painters, Delacroix, Ingres, and Renoir. In thinking about the subject this morning it occurred to me that, given the conveniences of modern-day Internet research, I could delve more broadly into the subject, not from the limited scope of three artists but instead, looking at how art, culture, society, and specifically women themselves have come to define feminine beauty today--now as compared to then.


There are numerous complicating aspects in such a query. Perhaps first and foremost are the myriad aspect of what women wear. That's such a massive area of interest I immediately rejected wading into such a needle and thread quagmire. I decided it would sufficient to concentrate simply on makeup, hairstyles, and the influence of the various art and social media involved. The next question was where to begin? Presumably women have at least seemed beautiful since the Garden of Eden and the first palindrome: "Madam, I'm Adam." But inasmuch as beauty has always been in the eyes of the beholder, beauty today is far from that which Adam beheld.
It's not that women are more beautiful now than then, it just seems that there are a lot more of them, which I guess stands to reason. In any case I chose as a starting point the year 1800. It was somewhere about that time that, with the onset of the Industrial Revolution, women's fabrics and clothes began to be mass produce. As a result, virtually any middleclass housewife could afford to make or buy at least one fashionable frock. And with that came fashionable hairstyles, hats, jewelry (as in cheap), and makeup for the masses. Before that, beauty bespoke wealth. From the early 19th century...not so much.

Portrait artists are exceedingly conscious as to the prevailing cultural ideals of feminine beauty. As a result, they've often tended to flatter their female clients, sometimes shamelessly. When it comes to women and beauty, they've even been known to be outright liars. However, with the advent of even crude portrait photography came the adage, "the camera doesn't lie." Of course, in the hands of an exceptional photographer there can still be an element of visual prevarication, except that the "shameless flattery" became more subtle and complex.

It might come as a surprise to some, but those who study the many elements of women's styles and tastes can be quite accurate in pinpointing the approximate years when women's photos were prob-ably taken. The center parting, and the "turban" hairdo, seen in the photo at right, along with the dress, suggest this tiny keepsake likely dates from the 1850s. In fact, women's hairstyles down through history have sometimes changed so ab-ruptly to the point that cultural historians can pinpoint the date within a year or two. Don't expect that kind of accuracy in the case of male portraits, though.

The one key element in virtually every cultural, social, and historic ideal of feminine beauty is youth, as cruelly depicted in the split cartoon at the top. Large eyes, a tiny nose, perfect teeth, long lashes, a flawless complexion, distinct and distinctive eyebrows, a smooth, slender jawline, and a nice smile are all important "features" of a classically beautiful face. So critical are these attributes that they are, surprisingly, not gender specific. All or most of them are to be found in male faces, sometimes to the point of androgyny (bottom). 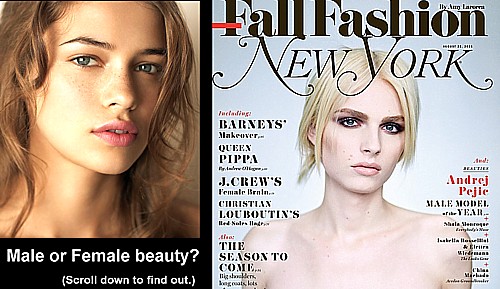