If you've ever visited St. Peter's Basilica in the Vatican while passing through Rome, you've no doubt been impressed. The closer you got to it, the more you were impressed. And once you got inside it, you were no doubt impressed by its scale, Baroque decoration, and massive dome. That is, if you've not already been impressed to the limits of impressibility by a visit to the Sistine Chapel. Don't even think about joining the mob scene in front of Michelangelo's Pieta, you have to get really close to it in order to be impressed. The fact is, that all I've mentioned was designed and built about four-hundred years ago for the single purposes of impressing visitors with the majesty, beauty, and power of the Roman Catholic Church.
While there, you should consider the fact that, as impressive as today's St. Peter's may be, Pope Julius II, the kingpin behind the building of the incredible piece of ecclesiastic architecture we see today, had his architects and a wrecking crew tear down the original (or what's referred to now as "old") St. Peter's, which was almost as large, almost as magnificent as today's basilica. Moreover, it had an even longer, more colorful, more impressive history than that of today. Old St. Peters' was begun in 326 AD and finished in 360. It stood for more than eleven hundred years, marking the traditional location of the grave of St. Peter, dating from around 65-68 AD.
Before there was either the new or the old St Peter's Basilica there was the Circus of Caligula and Nero. Both used the valley next to Vatican Hill as a chariot race course, first for mere practice for the games in the much larger Circus Maximus, then later, as grandstands appeared on both sides, as a second venue for chariot races. It was the northern length of this stone seating which later became part of the foundation for the south wall of Old St. Peter's. It was within the precincts of Nero's Circus that the apostle, Peter, was put to death around 65-68 AD. Tradition has it he was buried in a nearby necropolis (cemetery) conveniently located just across the street from the circus.

For about three-hundred years after St. Peter's martyrdom, the Vatican fields, as they were called, fell into disuse. Gladiators and lions devouring Christians became the main sport of the day, for which the new Coliseum next to the forum was much better suited. Then came the reign of the Roman Emperor Constantine, who not only made Christianity legal again, but joined their ranks. Until then there had been only meager efforts to mark the tomb of St. Peter. Constantine saw to it a proper church was built on the site, the transept crossing the nave directly over the high altar which was one level up and directly over the tomb. Today's high altar is yet one more level higher than that of Old St. Peter's. They leveled parts of Vatican Hill for fill dirt. The old necropolis (carefully preserved) is some five meters below the floor of the present day basilica. 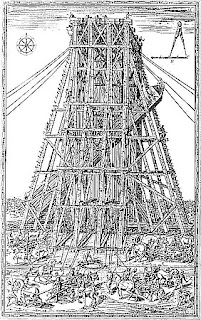 The round building located next to the obelisk (above) may actually be the oldest structure on the site, predating the circus. It was occupied by a cult whose worship involved bathing in the blood of bulls (the original bloodbath?). Later it became a tomb for a wealthy empress and later still, it became the Chapel of St. Andrew. Another round structure came later, the mausoleum of the Emperor Honorius, which was turned into the chapel of St. Petronilla during the medieval period. Both were connected to Old St. Peter's. Both were torn down with the building of the new St. Peter's (below).

How did they move the
obelisk? Very carefully.
The etching gives us a
clue. 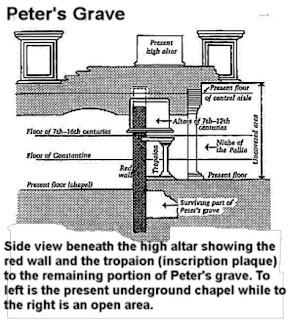 Building Old St. Peter's was no sim-ple task for Constantine's architects and engineers. The land sloped down from Vatican Hill both north and south as well as east and west (see diagrams below). One might wonder if there was much left of Vat-ican Hill once they got done filling in the valley. The backfilling and level-ing resumed again when construc-tion of today's St. Peter, raising the elevation another ten feet. It's re-ported that some of the ancient re-taining walls constructed during both eras are now badly in need of rein-forcement or rebuilding. The dia-gram at left details the relationship of the various underground tomb relat-ed construction over the centuries.

From 65 A.D. to 313 A.D, Christians in the Roman Empire were forced to practice the beliefs in hiding. For 248 years Christians risked their lives to follow Jesus Christ. Emperor Constantine, in 313 A.D., stopped the persecution of Christians in the Edict of Milan, which removed penalties for professing Christianity and returned confiscated property. Throughout his rule, Constantine supported the Church financially, built basilicas, granted clergy exemption from certain taxes and promoted Christians to government offices. Construction of the First Saint Peter's Basilica was begun on the orders of the Roman emperor Constantine around 326 A.D and took 30 years to complete.

In 846, Saracens sacked and damaged the basilica. The raiders seem to have known about Rome's extraordinary treasures both holy and impressive. Basilicas, such as St. Peter's were outside the Aurelian walls, and thus easy targets. They were filled to overflowing with rich liturgical vessels and with jeweled reliquaries housing all of the relics recently amassed. As a result, the raiders pillaged the holy shrine. In response Pope Leo IV built the Leonine wall and rebuilt the parts of St. Peter's that had been damaged.

However, by the 15th century the church was falling into ruin. Discussions on repairing parts of the structure commenced upon Pope's Julius II's return from Avignon. Two people involved in this reconstruction were Leon Battista Alberti and Bernardo Rossellino. Alberti pronounced the basilica a structural abomination. At first Julius II had every intention of preserving the old building, but his attention soon turned toward tearing it down and building a new structure. Many at the time were shocked by the proposal, since the building represented papal continuity going back to Peter. As a compromise, the original altar was preserved in the new structure that housed it.