It has long fascinated...even perturbed...me that in the art world today, and for at least a thousand years in the past, the monetary value of art rests not so much on the quality of the work but the name of the artist attached to it. I suppose there is a sort of valid logic to such a rule in that the great masters all did extremely high quality work, their efforts and outcomes well worth a reasonable price (depending upon your definition of "reasonable"). However, today this economic model is long past any definition of reasonable. In its place, the word "ridiculous" comes to mind. In defense of this model, there will always be copyists and their work must be exposed for what it is with prices adjusted accordingly. Complicating this factor is their broad range of competence from easily identifiable trash to works which often confound even the experts.
For example, Diego Velázquez's original portrait of the Infanta Margaret Theresa. surrounded by her maids of honor, is the main attraction in Madrid’s Prado Museum. The artist’s use of mirrors and strange angles has long left the piece wide open to interpretation, causing it to become one of the most famous and studied paintings in the world. However, there is a smaller, similar version of the painting which recently gained notice in Dorset, England causing major disagreements, with ongoing questions as to who painted it. The painting was purchased by British MP William Bankes for his home, Kingston Lacy, where it has hung virtually unnoticed for the past 150 years. There are significant differences between the original and this version, causing experts to question whether it was a first draft by Velázquez, or a subsequent copy. Some notable experts believe the Kingston Lacy version to be a first draft, painted by Velázquez perhaps to be approved by the king. However, most experts maintain that it is a copy by Velázquez's son-in-law and student, Juan Bautista Martínez del Mazo. The attribution would substantially alter the painting’s worth, which is presently unknown.
The key to this questionable evaluative model rests with the art and science of attribution. Chief among the "experts" which support this economic "house of cards" is the art historian. However, such writers and researchers are but one group of a number of others whose technical expertise, advice, and best guesses also provide the underpinning which determines auction prices and, unfortunately, bears far too much influence as to what we consider merely "good" art, and rare collectible masterpieces. The fragile nature of this system is very often born out when these art experts disagree (as in the case of Las Meninas), or new evidence surfaces having to do with attributions. Hundreds of millions can quickly come and go when a work's attribution is even questioned, or newly authenticated.
In 2017 art history was made when Leonardo's Salvator Mundi (above) sold for a record-breaking $450-million at Christie’s in New York. The seller was a Russian billionaire named Dmitry Rybolovlev. The buyer was the Abu Dhabi Department of Culture and Tourism. The Saudis were seen to have made a financially sound move, with the picture expected to draw in visitors rivaling those of the Louvre's Mona Lisa. Abu Dhabi has its own Louvre where the painting will be exhibited. However, despite experts previously confirming the da Vinci attribution, various scholars and critics have cast doubts on the painting’s authorship. The painting of Jesus was thought to be one of only twenty known paintings by Leonardo. However, a handful of art historians, da Vinci scholars, and critics have now suggested the piece might actually be the work of the artist’s studio assistant, Bernardino Luini. His work sells for less than $1-million.

Then there is the story of an Italian Renaissance painting owned by a Buffalo resident and its questionable attribution to Michelangelo. While the city of Rome and Vatican recently celebrated the 500th Anniversary of Michelangelo's completion of the Sistine Chapel frescos, a New York State resident is also celebrating Michelangelo and the approaching authentication of a rare 470-year-old painting the owner had stored behind his couch. Italian scholars in several disciplines have compiled a catalog of scientific evidence supporting Martin Kober from and his claim that his 25 by 19-inch wooden panel is an original Michelangelo. The Italian art historian, Antonio Forcellino, sees Kober's painting as being even more beautiful than other versions hanging in Rome and Florence. Infrared and X-ray examinations of the painting show many alterations made by the artist as he changed his mind, along with an unfinished portion near the Madonna’s right knee. Forcellino notes that the unfinished portion proves that the painting could never be a copy of another painting. Forcellino insists, “No patron during the Renaissance would pay for an unfinished copy.” Also, the ownership history, points to the work being done by Michelangelo around 1545 for his friend Vittoria Colonna. The provenance is unbroken. If fully authenticated, the painting could be worth up to $300-million.

Moreover, it's not just works by relatively "recent" artists such as Leonardo and Michelangelo which have come under closer scrutiny. With replicas made and exhibited around the world, the Nefertiti bust is one of the most recognizable and beloved archaeological discoveries of all time. Until recently, the original 3,400-year-old bust was believed to have been discovered by Ludwig Borchardt in Egypt in 1912. Now exhibited in Berlin’s Neues Museum (above), the bust of Akhenaten’s wife has always caused controversy. Despite many requests from Egypt, Germany has so far refused to give the treasure back. It draws millions of visitors to the museum each year. However, scandal engulfed the statue when two art historians challenged the history of the artifact. They have argued that the bust could be a fake. While it is possible to carbon date the pigments which have been proven to be ancient Egyptian, the bust itself can’t be accurately dated because it is made of stone covered in plaster. (So what?)

And if you think more recent works are any simpler to authenticate, think again. Jackson Pollock's Red, Black & Silver (left) was painted sometime around 1956. The painting is just 24 by 20 inches and wholly unlike any other by Pollock. Increasing the stakes, the painting is probably Jackson Pollock’s final work. Neither the owner or the artist are alive to see the result of this fierce debate, the outcome of which will determine whether this painting is worth up to $50,000 or several million. In 2001, Jackson Pollock’s Black and White/Number 6, 1951 (above) sold for almost $8 million. in 2017, his Number 17A sold for a staggering $200-million. Therefore it’s little wonder that his mistress, Ruth Kligman, spent a lifetime trying to prove that Red, Black & Silver was a genuine Pollock, gifted to her only weeks before his death. Top authorities have denounced the painting as showing few characteristics of authentic works by Pollock (they're right about that). A panel of experts long ago rejected the painting as a fake. However, the panel was established by Lee Krasner, Pollock’s wife, known for her rivalry with Kligman. Forensic tests now confirm Red, Black & Silver was created in Pollock’s home. Yet, even this has not convinced the scholars. 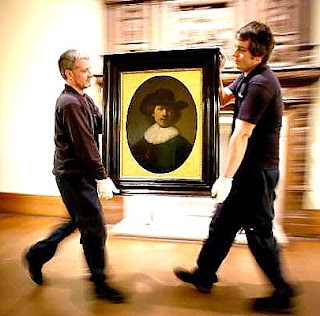 Instead of resolving disputes, fre-quently, scientific findings only reignited another, pitting traditional ways of determining whether a work is genuine against new technologies. Perhaps art historian William Wallace best sums up the "who done it" quagmire which sometimes surfaces to call into question our whole value system as pertains to fine art master-pieces: "Unfortunately, attribution is seldom a definitive affair. Assigning any work to a master is almost always a matter of waxing and waning scholarly opinion. Pieces tend to fall in and out of favor as opinions change over time."