Some six or seven years ago, when my daily ruminations were little more the two or three paragraphs in length, I wrote about the nearly 20% of all European art plundered by the Nazi's during WW II. Needless to say, such items were quite general in scope and barely scratched the surface of any efforts too recover such work. I was astounded to read more recently that the unrecovered works, even some seventy years after the end of the war, still numbered in the hundreds of thousands. The search continues along with seemingly endless court battles when stolen works periodically turn up. Such litigation is understandable when the value of these works ranges (depending upon their condition) from nearly worthless to figures in the hundreds of million. Some of them, such as the ones seen here, are simply labeled "priceless."
The Painter on His Way to Work (top) by van Gogh is a self-portrait, painted in 1888 and hung in the Kaiser-Friedrich Museum in Magdeburg, Germany, before the war. It was taken by the Nazis in the early part of the conflict and hidden in their secret salt mines' art repository in Stassfurt. While some reports suggest it was destroyed by fire, other sources indicate the artwork survived and might be out there somewhere. This masterpiece is on the Mon-uments Men Foundation's most wanted list. The foundation was set up in 2007 in memory of the men and women of the Monuments, Fine Arts, and Archives program, who have recovered countless works of art stolen during the Second World War. Their story was told in the 2014 film The Monuments Men. Having a similar fate was Portrait of a Man by the Early Renaissance painter Sandro Botticelli (right). Likewise labeled "priceless," this painting also appears on the foundation's most wanted list. The portrait was the most treasured object in the Filangieri Mus-eum in Naples, Italy, until the Nazis got their hands on it. On September 30, 1943, Nazi troops discovered the painting in a villa in Naples, where it was being hidden. As they did with so many exceptional works of art, they wasted no time stealing it. The portrait vanished en route to Germany and its whereabouts remain unknown.

For sheer audacity, it would be hard to match the Nazi theft of an entire room from Catherine's Palace near St. Petersburg, Russia. The star attraction of the 18th-century palace was the gold and amber-laden Amber Room (top image, above). It was widely regarded as the 'Eighth Wonder of the World.' Created in the early years of the century for Frederick, King of Prussia, the gilded masterpiece was stolen by the Nazis during Operation Barbarossa in 1941. The Russian curators knew it would be impossible to store the room and its contents for safe keeping so they tried to hide it by covering the room in wallpaper. Their feeble efforts were of no avail. The masterpiece was taken by the Nazis to Königsberg Castle in Kaliningrad, which was then part of Prussia. The priceless room is thought to have been destroyed along with the castle in 1945, though some experts believe it was saved and may be stashed away somewhere in Poland. In 2017, three German treasure hunters claimed they had found it hidden in a cave in eastern Germany. The palace was largely destroyed during the war (below), but barring no outrageous expense, the Russians have totally reconstructed the ornate museum including a pale imitation of its once spectacular Amber Room (lower image, above). 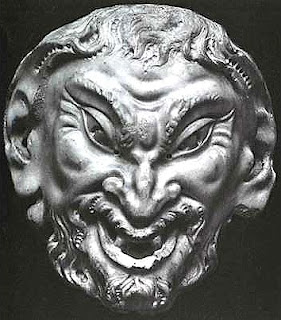 A seminal piece by Michelangelo, the Head of the Faun (left) was the old master's first known marble sculpture. The piece is famous for its having won him the patronage of the powerful Florentine leader Lorenzo de' Medici. The sculpture, which is the property of the Bargello Museum in Florence, Italy, was looted in August 1944 by Nazi troops and loaded onto a truck, along with other priceless artworks. Some experts believe the sculpture may have eventually found its way to the Soviet Union, but Michelangelo's first marble artwork remains lost to this day.


Joining Michelangelo on the "most wanted" list is his rival, Raphael di Sanzio and his Portrait of a Young Man (above). This 1514 artwork by the quintessential painter of the High Renaissance is regarded as the most important painting missing since the Second World War. Raphael's Portrait of a Young Man was stolen from the aristocratic Czartoryski family in Kraków, Poland, in 1939. The painting, which had been spirited away by Prince Augustyn Józef Czartoryski (lower image above), was discovered by Gestapo agents working for Hans Frank (second image, above), the Nazi Governor-General of Poland. The portrait ended up in Frank's villa in Neuhaus, Germany, but its whereabouts have been unknown since 1945.


Not all the artworks stolen by the Nazis were admired by the Nazis. In fact, art that was deemed "degenerate" by the Third Reich was looted and either destroyed or sold. This included many modern works of art, such as Jean Metzinger's En Canot (right). The hugely influential Cubist paint-ing, which caused a sensation when it was exhibited in Paris in 1913, was eventually acquired by Berlin's National Gallery. The Nazis confiscated the painting in 1936 and it featured in Hitler's Degenerate Art Ex-hibition in Munich. Since then, En Canot has been missing, likely destroyed. Unlike the paintings and sculptures of many of his contemporaries, Gustav Klimt's works were never labeled 'degenerate' by the Nazi authorities. Still, a number of the Austrian symbolist's canvases were seized by the Third Reich, including the Portrait of Trude Steiner (above, upper image), painted in 1900. The portrait depicts the father of Jenny Steiner (lower image, above), a Jewish collector who fled Austria in 1938. The artwork was confiscated by the Nazis following Steiner's lucky escape and sold to a mysterious buyer in 1941. It's not been seen since. Whether it survived the war is anyone's guess.


Adolph Hitler was a failed artist who fancied himself as a critic and collector. He was planning to create the Führermuseum, a major art gallery in Linz, Austria, which would have displayed the most important treasures stolen by the Third Reich (A model of the proposed museum is seen below). Among the artworks earmarked for the gallery was An Angel with Titus' Features (above) by Rembrandt. The painting depicts the Dutch artist's son and was stolen by the Nazis from a chateau in rural France in 1943. It ended up in a Paris warehouse, awaiting the building of the Führermuseum, which never happened. After that, the trail runs cold and the painting is presumed destroyed, or might very well be languishing in a clandestine collection somewhere.


Not all the victims of Hitler's wartime art rampage took the theft of their art lying down (often in their graves). The Jewish banker and collector, Hans Rudolf Fürstenberg (below), bought the sculpture titled Sappho from the renowned artist Auguste Rodin sometime in the early part of the 20th century. Fürstenberg fled Germany for France in 1937, and the sculpture was eventually stolen by the Nazi looting agency, Einsatzstab Reichsleiter (ERR). The sculpture was stored in a Paris warehouse for a time, but went astray around 1942. Despite its scale, today, Rodin's marble masterpiece is considered lost forever. Fortunately, Fürstenberg survived the war, having sought refuge in neutral Switzerland. Despite his best efforts, the avid art enthusiast was unable to recover a significant part of his collection.