As we wander through the archives of art history we find few sudden, revolutionary changes. Usually they are caused by major wars--WWI and WWII, for instances. The same holds true for American art during the 19th century with the upheavals in society--both north and south--resulting from our Civil War. Before the war, American art was fairly provincial, isolated from the greater art world of Europe and other environs. In many cases such art could almost be considered folk art. After the war, and for the remaining thirty years of the century American art lagged somewhat behind that of Europe, but never very far behind. The art itself usually didn't migrate to this country but the artists did migrate to Europe. Furthermore, they returned having absorbed the best their European counterparts had to offer. Among those making the journey to Europe to study art were James McNeill Whistler, Grant Wood, John Singer Sargent, Mary Cassatt, Thomas Eakins, William Merritt Chase, and numerous others of lesser stature. However one of the greatest mid-century artists in America did not learn his craft in Europe--Frederic Edwin Church (above).
Church was a New Englander, a graduate of the all-American Hudson River School, having studied under Thomas Cole. His Twilight in the Wilderness (top), is considered the best purely American work of art of the century. It joins his other masterpieces such as Hear of the Andes (1859), Niagara (1857), Cotopaxi, (1862), Tropical Scenery (1873) each of which he debut in one-painting exhibitions, garnering widespread critical acclaim and fame. The only other American artist of the 1860s of comparable importance is Albert Bierstadt as seen in his View of Chimney Rock, Ogalillah Sioux Village, 1860 (above). Though born in Prussia, Bierstadt came to this country at the age of one. He too, was a graduate of the Hudson River School, though unlike Church, he spent several years studying in Europe (Dusseldorf, Germany).
Meanwhile, in Europe, the painting Interiors of the New Hermitage (above) from 1860, by Edward Petrovich Hau1 conveys some idea of the European developments in the art of this period. It was during this period that three major French artists were starting to make names for themselves, Claude Monet (below) Edouard Manet, and Auguste Dominique Ingres. Monet's major work from this period is his expansive Le Dejeuner sur l'herbe, 1866, a group portrait of Gustave Courbet, Frédéric Bazille and Camille Doncieux, first wife of the artist (below).
Still more of a revolutionary figure in French art was works from this era by Edouard Manet such as his scandalous Olympia from 1863 and his The Spanish Singer from 1860 (below). Both works brought him into direct conflict with the high-minded aesthetics of the French Academy. In fact the list of Manet masterpieces from the 1860s seems endless--Boy Carrying a Sword, (1861), The Surprised Nymph, (1861), Mlle. Victorine in the Costume of a Matador (1862), The Dead Christ with Angels (1864), The Battle of the Kearsarge and the Alabama (1864), The Dead Matador (1864–65), Young Flautist, or The Fifer (1766), and as many as a dozen others.
And representing the established academicism with whom both Monet and Manet did battle from time to time we find Jean-Auguste-Dominique Ingres, represented here by his The Turkish Bath (below, 1862-63). After studying and working in Rome for several decades, with little or no acclaim, Ingres (pronounced Ang) returned to Paris in 1833 for a few years before returning once more to Rome to become the Director of the French Academy there. The Turkish Bath was one of his final paintings before his death in 1867. The Turkish Bath he painted at the ripe old age of 83.
﻿
The other art field making great strides during the 1860s and particularly during the war was that of photography. Matthew Brady was one of the earliest photographers in American history, best known for his scenes of the Civil War. He studied under inventor Samuel F. B. Morse, who pioneered the daguerreotype technique in America. Brady opened his own studio in New York in 1844, and photographed Andrew Jackson, John Quincy Adams, and Abraham Lincoln, among other public figures. When the Civil War started, his use of a mobile studio and darkroom enabled vivid battlefield photographs that brought home the reality of war to the public. Thousands of war scenes were captured, as well as portraits of generals and politicians on both sides of the conflict, though most of these were taken by his assistants, rather than by Brady himself. His efforts to document the American Civil War on a grand scale by bringing his photographic studio onto the battlefields earned Brady his place in history. Despite the dangers, financial risk, and discouragement by his friends. His first popular photographs of the conflict were at the First Battle of Bull Run, in which he got so close to the action that he barely avoided capture. While most of the time the battle had ceased before pictures were taken, Brady came under direct fire at the First Battle of Bull Run, Petersburg, and Fredericksburg.

On the home front the war had only a modest effect on high fashion of the day in the North. In the South, however, as the war wore on, imported fabric became more and more expensive and then impossible to obtain. Gingham, calico, and even denim became more and more the norm. Poplin and flannel were popular on both sides of the battle lines. Hats were a rage then. These headdresses were big and heavily decorated with feathers of ostriches, pheasants, and bustards. These hats were sometimes made of straw, crinoline, which was often made out of horse hair. The hats were then added with bows or fur with respect to the weather--a bow in summer, and fur for the winter. For young children, the hats were kept very simple with small bows and decorated with either daisies or other small flowers.

Men during this time generally wore dark-colored three-piece suits, with a collar, vest, and an overcoat. The younger generation of men went for more colors while the older ones had a more conservative approach to dressing. The men had separate outfits for different occasions, just like the women. They had different outfits for walking, smoking, and a more formal suit for formal occasions. The men wore bell hats with the brims curved on the sides. They were made of different colors and materials to go with the outfit they were wearing. 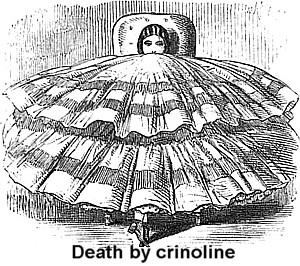