It's hard to make a living as an artist (take it from one who knows). Even for the highly talented, it's a touch-and-go, feast-or-famine existence in which very often more time is spent selling art (or trying to) than creating it. For those who can handle them, portraits have long been a golden (or at least silver) key to a living wage as an artist. For some twenty years, I made a steady, though not spectacular, income doing portraits (mostly pencil drawings left), and occasionally, painted portraits (top). The latter are about five times more difficult and time consuming for about ten times the money. Portrait photography, over the past hundred years, has made tremendous inroads into this type of art and its income for artists. As a result, portrait artists have fought back by using photography, squeezing from it all sorts of time-saving hardware and technical enhancements, but the battle has been mostly uphill. Today, painted portraits are for the rich and famous with far too many excellent artists seeking far too few commissions.
﻿
The first stirrings of an art culture in colonial America came in the form of painted portraits shortly after 1700. In the beginning, one could hardly call them portraits. For the most part they were simply crudely painted faces. A few artists briefly established portrait studios in cities such as Boston, New York, and Philadelphia, but for the most part, such art was created by completely self-taught itinerant painters called Limners. One of these was Richard Jennys, sometimes spelled "Jennis" (likely how it was pronounced). Richard Jennys was born in London around 1734. His family were merchants and financiers involved with insuring maritime cargoes. They came to America, settling in Boston, when Richard was about seven years old. His art education was meager at best, possibly apprenticed to other self-taught artists in the Boston area at the time. No self-portrait exists.

﻿
Richard Jennys' earliest surviving works date from around 1764 when Paul Revere sold him a silver frame. He also moonlighted as a dry goods merchant, or perhaps it was the portraits which were a sideline. In 1770 Jennys married a local Boston girl. Eventually, they produced five children. The second son was William Jennys, born in 1774, who apparently shared his father's art talent. Richard joined the Boston Militia during the War of Independence. Later, as his talented son matured, he taught the boy to paint, which in this case, pretty much amounts to young William having been self-taught. William's work shows continuous improvement over the course of his twenty-five year career as an artist. As is the case very often when fathers and sons paint together, their work becomes very difficult to differentiate. In general, William Jennys' portraits are simply "better" than those of his father, the figures slightly more lifelike, the poses and painting technique more daring, the lighting offering more contrast. 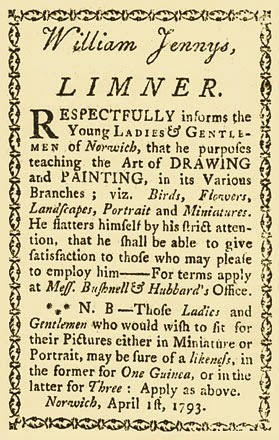 For those having difficulty reading the  1793 ad at left:

Respectfully informs the Young Ladies and Gentlemen of Norwich, that he purposes teaching the Art of DRAWING and PAINTING in its various Branches; viz. Birds, Flowers, Landscape, Portraits and Miniatures. He flatters himself by his strict attention that he shall be able to give satisfaction to those who please to employ him---For terms apply at Mess. Bushnell & Hubbard's Office.

N.B--Those Ladies and Gentlemen who wish to sit for their Pictures either in Miniature or Portrait, may be sure of a likeness in the former for One Guinea, or in the latter for three: Apply as above. Norwich, April 1st, 1793.

Richard Jennys became an itinerant artist somewhat involuntarily--his landlady kicked him out for being a deadbeat. Leaving his family, he hopped a ship heading for Charleston, South Carolina, where he advertised his talents in painting portraits, large and small (meaning miniatures). Not surprisingly his wife back in Boston divorced him. Although he apparently owned property in Charleston, he was likewise no more successful there than in Boston. After five years, Jennys fled back north, this time owing three years of back taxes rather than rent. By this time, Richard Jennys was likely almost sixty, his son around eighteen or nineteen. This time around, rather than paying rent or taxes, father and son hit the road together painting portraits. Being limners, they had a changing clientele as they moved from town to town. The the well-to-do in the cities were becoming too sophisticated to support untrained artists. The Jennys' skills were such that they simply couldn't compete with the likes of Copley, John Trumbull, or even Robert Feke (also self-taught). 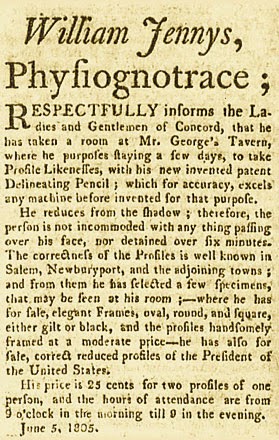 Respectfully informs the Ladies and Gentlemen of Concord, that he has taken a room at Mrs. George's Tavern where he purposes staying a few days to take Profile Likenesses, which his new invented patent Delineating pencil; which for accuracy, excels any machine before invent for that purpose.
He reduces from the shadow; therefore the person is not incommoded with anything passing over his face nor detained for over six minutes. The correctness of the Profiles is well known in Salem, Newberryport, and the adjoining towns; and from them he has selected a few specimens that may be seen at his room;--where he has for sale elegant Frames, oval, round, and square, either gilt or black and the profiles handsomely framed at a moderate price--he has also for sale profiles of the President of the United States.
His price is 25 cents for two profiles of one person, and the hours of attendance are from 9 o'clock in the morning till 9 in the evening. June 5, 1805.

This time, in making a fresh start, the two had a crude bit of "cutting edge" technology going for them They called it in the advertising a "delineating pencil," which was probably a physiognotrace, a complicated, tripod-mounted gizmo designed to accurately produce silhouette images in as little as six minutes. Basically it combined a translucent screen with a pantograph using a candle as a light source. The pantograph allowed the silhouette shadow to be reduced, producing drawings as small as two inches, depending upon the pantograph settings. It must have been awkward at best. As a kid, I once owned a pantograph. It took me about five minutes to realize it was more trouble than it was worth. Invented by a Frenchman named Gilles-Louis Chrétien around 1783, the physiognotrace came to the U.S. when American inventor, John Isaac Hawkins, financed by the artist, Charles Wilson Peale, improved the device and began marketing it around 1792.

Despite what looks to have been a rather steep learning curve, the drawing aid worked as advertised, reducing or removing the requirement for outstanding eye-hand coordination. The Jennys specialized in "doughnut hole" silhouettes, where the inside of the image was mounted on a cloth backing of contrasting color (usually black or white). These he sold, two for twenty-five cents, the frame likely costing much more than the artwork. They also sold silhouettes of President Thomas Jefferson. Though silhouettes were becoming quite popular all up and down the east coast, and despite their no doubt expensive drawing device, the duo made their primary sustenance in painting portraits. They worked together (with brief respites apart) for about sixteen years. Richard Jennys died in 1809, after which his son, painted few portraits, finding real estate investments in the growing cities of the East much more profitable. The latter years of his life he worked as a florist and as a comb maker, later becoming a farmer and tavern keeper. He died in 1859 at the age of eighty-five.