My wife tells the story about her grandmother, who lived with them when my wife was growing up. Her grandmother considered any form of gambling to be a mortal sin (not uncommon at the time). I suppose that might explain why my wife is so reluctant to gamble on getting up each morning. In any case, her grandmother's belief was so strict she wouldn't allow a deck of playing cards anywhere in the house. She saw them as a tool of the devil. Today there are playing cards featuring events from the life of Christ. Still others are designed to help children (and no doubt some adults) learn to keep track of all the Old Testament prophets. Such illustrations might seem odd to be considered an art form, but down through the centuries artists have found both the front and back of playing cards to be a very receptive "canvas" for some of their best artwork, such as the Jack of Diamonds (above) by Vaelyane.

When searching for the "genesis" of such common items, we have to go back (as is often the case) to China, to the Ming Dynasty of around 1400 AD. (left). Although one might expect such an artifact to look nothing at all like it's modern counterpart, in this case however, although the shape is different, the image is obviously that of a queen, though the deck had neither suits nor numbered cards. They were, indeed, part of a game, but one more reminiscent of Old Maid than poker. Actually, the Chinese can boast bragging rights to cards with numbers and suits going back even further to the Song Dynasty (960-1279) known as the "leaf" game. The rules have long since been lost. Most scholars attribute the advent of playing cards to the invention of block printing around the same time. Whatever the case, the games associated with such cards must have been quite intriguing in that there use, in various formats, spread westward at an surprising pace. The Egyptian Mamelukes from around the 12th or 13th centuries used a deck of four suits and twelve cards similar to ours today, except in appearance (below). Being Muslims, the depiction of the human figure was forbidden, though if one has a keen eye (and some degree of imagination) the "face" cards can be seen embedded in the otherwise geometrical designs. The four suits were polo-sticks, coins, swords, and cups (still used in traditional Latin decks).
From the Far-East to the Mid-East playing cards seem to have traveled the trade routes, arriving in Europe by about 1365. The Germans, having invented movable type and perfected the printing process began producing what we would consider "modern-day" playing cards around 1418. Some such decks even contained devotional images. All such cards were hand-painted or colored using stencils from about 1450 on. Red, black, and golden yellow became the most common colors since those pigments with both inexpensive and readily available. The Knave of Coins (right) from the oldest known European deck dates from between 1390 and 1410. By both Chinese and Mameluke stand-ards the artwork and printing seem quite crude. At the same time, the symbols for the various suits evolved with trèfles (clovers) corres-ponding to clubs, carreaux (tiles), became diamonds, cœurs (hearts), and piques (pikes) evolving into spades. Today, whether we realize it or not, we are essentially playing with French playing cards, though there are decks from other European countries, among them being Italy, Spain, Switzerland, and Germany using various other icons, some similar while others differ greatly (below).
As gamblers and other card-playing groups (such as Bridge clubs) continually developed new games with new rules, artist have had a great time catering to this surprisingly lucrative pastime, with attractive (usually geometric) designs for the backs of each card and the most up-to-date, high society fashions on the front. During the 1700s and 1800 the French, having popularized cardplaying, and being extremely fashion conscious, unleashed their burgeoning army of fine art painters to produce some of the most highly detailed and visually exciting royal "face" card images (below) not seen (before or since).
If you haven't already noticed, some of the face cards seen so far are not "revers-ible" (the lower half of each figure being a mirror image of the top half). This feature and the value indices in the upper right corner of each card were developments of the early 19th century. Apart from rounded corners, the final innovation to the deck of playing cards came from the United States in 1864 when the printer, Samuel Hart, introduced the "joker" as part of the still wildly popular game of Euchre. Although Hart's version seems tame enough, later artists have long had a "field day" drawing jokers. The only other modern-day playing card "invention" I can think of is the novelty "mini-deck" (below), though I doubt anyone plays more than a single hand with these little guys before the "novelty" wears off. Likewise, magicians specializing in nightclub card sleight-of-hand love the giant playing cards with faces and figures clearly discernable from the rear mezzanine.
﻿﻿
The history of playing card design is much easier to write about than the present-day images which have evolved. Since the advent of photography and mass advertising both the fronts and backs of today's playing cards have shed any vestige of "fine" art in favor of promotional values. The playing card art of Carne Griffiths (below) created in a drippy watercolor style with inks made from tea would seem to be a notable exception. 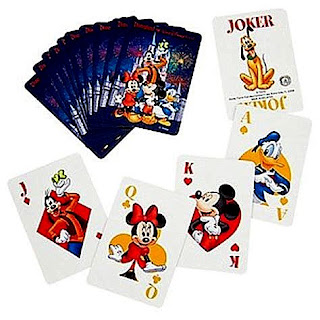 Otherwise, from Coca-Cola to Pepsi, Gone With The Wind to Star Wars, (below) I don't think there's ever been an advertising art director who didn't think that literally putting their ads in the "hands" of card players wouldn't help sell their products. Even the venerable folks at Disney (right) have not been above using this longstanding and highly effective promotional device (below). Some movie stars don't even need a hit movie to get their faces on playing cards (bottom).