From time to time in researching the work of various artists I come upon the name Robert Delaunay. It seems he was an important influence on any number of the 20th century's best and brightest, yet surprisingly, there is very little in the history books about the man. In fact, you can find almost as much on his wife, Sonia. Of course she outlived him by some 38 years so perhaps that's the reason why. Have you ever seen a somewhat abstract, perhaps rather Cubistic painting of the Eiffel Tower?  Chances are, unless it happened to be one by Marc Chagall, it was probably by Robert Delaunay. It's little wonder, he painted the damned thing over sixty times, starting about 1910 until he died in 1941.  He was infatuated, one might even say obsessed with it, referring to the Paris landmark as the "Center of the Universe."  Even one of his best known paintings, an otherwise fairly abstract Homage to Bleriot, painted in 1914, has a small Eiffel Tower in the upper right corner, accompanied by the circling biplane in which Louis Bleriot first flew across the English channel that same year.  For a time at least, it would seem, Delaunay was also into current events.
Robert Delaunay was born in 1885. His parents divorced while he was quite young and he was raised by a wealthy uncle who sent him to a decorator's studio for training in the arts. There he was first exposed to Impressionism and especially the work of Cezanne, who was only then first becoming a prominent influence in painting. Though he flunked the "leaving exam" he apparently left anyway, and immersed himself it the heady, creative atmosphere of the Paris art world that was the first decade of the 20th century, taking after such painting icons of the time as Monet, Pissaro, Bonnard, and Gauguin. However, it was Cezanne that he kept returning to for his greatest inspiration. In due time he discovered the church of Saint Severin, and it is his towering, soaring abstracted arches that brought him to the attention of Wassily Kandinsky, who invited him to display in Germany with Der Blaue Reiter group. It was also about this time he met Sonia Terk, whom he married in 1910.
Aside from his abiding love of the Eiffel Tower and his young wife, Delaunay also had a great love of Cubism. Following an earlier affection for Neo-Impressionism, a sort of deconstructionist Cubist style marked his work for the next few years until he became absorbed in color and a movement the poet, Appolinare, termed Orphism. Though much more complicated than this, it was basically a synthesis of Fauvist color, Futurist dynamism, and Analytic Cubism seeking to follow the rhythms of nature, but not its appearance (which, amittedly, sounds pretty complicated in and of itself). Many of his paintings from this era employed multi-colored disks, allowing him to relate the color wheel to various extraneous colors and develop a theory of "simultaneity" of color and contrasts, juxtaposing primary colors to their complementary counterparts and studying the effects they might have upon one another. Working with him, his wife also delved into this and other color phenomena while also pursuing a career as a stage and costume designer, even developing her own line of fashions in the 1960s and 70s. So the next time you see the name Delaunay, think Cubist Eiffel Towers, Orphism, color disks, and don't forget Sonia. 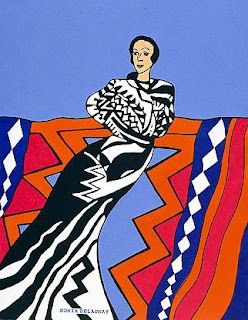