I've long known of the work of Mihály Munkácsy, even though I'd never even heard of the man until today. You see, I grew up with a color lithograph of his painting, Christ in Front of Pilate (above). It hung over the piano in our church. I can't tell you the number of boring sermons made bearable by my minute visual examination of this work. Naturally, the faded litho bore only the vaguest resemblance to the actual painting with its bright colors and high contrast Academic Realism from that period in French Art. Of course, one look at the name and you know Munkacsy was not the least bit French. He was Hungarian, born in 1844 of German parentage. Munkacsy wasn't even his real name. It was a pseudonym based upon the town in which he was born, Muncacs, Hungary. The artist began his training in that country but then, utilizing a state grant, was able to study first in Munich, then Vienna, Dusseldorf, and finally in Paris. It was there, as he visited the 1867 Universal Exposition, he was captivated by French art and from that point on spent the rest of his life in Paris. (He died, however, in a German mental hospital in 1900.) 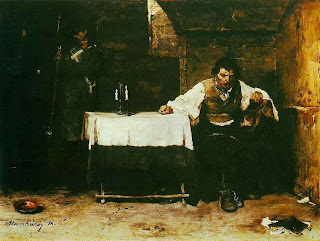 Last Day of a Condemned Man, 1870, Mihaly Munkacsy.
Gritty, coarse, morose, perhaps even ugly, it was not your typical Academic wall decoration.
Munkacsy was something of an opportunist. That's not to deprecate his art or his motives. Paris in the latter part of the 19th century was a city full of opportunists from all parts of the world, drawn by not just the money being spent there on art, but by the city itself, its ambiance, its academic institutions, and its status as the art capital of the western world. Munkacsy was first, and foremost a portrait painter. He was good at it, too. But then, there were literally thousands of other portrait painters in Paris at the time who were just as good, and they all spoke better French. Though portraiture lifted him from the ranks of starving artists, it was his Salon entry of 1870 which lifted him above the ranks of ordinary portrait painters. Titled Last Day of a Condemned Man (above), and it won Munkacsy a gold medal, making him instantly the best painter in Paris...for at least the next year anyway.

The Blind Milton Dictating Paradise Lost to his Daughters, 1878, Mihaly Munkacsy
Having made it to the top of the Paris art world, Munkacsy did not gravitate toward the prevaling tendency of such painters to paint history, or mythology, or even biblical subjects (initially, at least). Instead, he painted genre, everyday bourgeois scenes of women making lint, churning butter, or gathering brushwood for the fire. However, winning a gold medal did attract lots of galleries and agents eager to promote, sell, and guide his work. In Munkacsy's case that man was the Austrian-born Charles Sedelmeyer, who suggested his client combine genre painting with history painting. The result was  The Blind Milton Dictating Paradise Lost to his Daughters (above). Sedelmeyer bought the painting and promptly resold it for a sizable profit. As a result, he offered Munkacsy a ten-year exclusive contract to handle his work. The artist accepted and as a result became rich and famous.

Golgotha, 1884, Mihaly Munkacsy
Sedelmeyer wanted blockbusters. He pointed Munkacsy in the direction of biblical subjects of near biblical proportions. The painting, Christ in Front of Pilate (top) is a whopping 13 feet, 8 inches tall by 20 feet, 10 inches wide (hardly suitable for over the piano). It was followed in 1884 by Golgotha (above), and in 1896 by Ecce Homo (Behold the Man, below). All three were of similiar scale and Sedelmeyer sold all three to the American department store owner, John Wanamaker, for display in his Philadelphia establishment every Easter. The paintings are now on display in the Munkácsy Hall of the Déri Museum, Debrecen, (eastern) Hungary (bottom). The paintings were so large movers had to call upon the help of the local fire department to get them down from the wall.
Ecce Homo (Behold, the Man) 1896, Mihaly Munkacsy 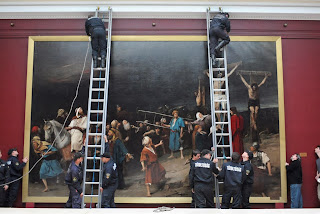 Nothing is harder to handle than something huge, heavy, and delicate. 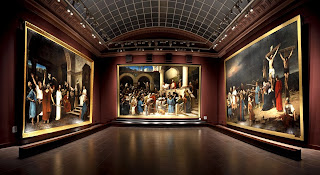 The trilogy as seen today in the Munkácsy Hall of the Déri Museum.
Posted by Jim Lane at 12:01 AM