It's fascinating to choose a subject or pick a frequently used painting title then observe how painters of various stripes have handled a given content area at any given time, or in some cases, down through the centuries. I've done so with topics such as the resurrection, cats, dogs, birds, cars, cities, and quite a number of other topics. At Christmas time, it's appropriate to observe how various artists have painted the nativity, or the magi. Having "been there, done that" from a religious point of view in past years, this Christmas I've chosen a secular content area with a single, almost universal title: "Waiting for Santa." In pursuing the topic, I was amazed at the sheer number of artists who have explored this Christmas Eve scene, and not always as a purely juvenile perspective. I was also somewhat surprised by the fact that the overwhelming majority of these artists were women. One of the earliest versions (left) by Emille Benson Knipe is undated, but judging from the style, I'm guessing it dates from before 1900. Although I've often painted scenes involving Santa Claus, I've never painted using that precise title. Maybe I should sometime, though it would be exceedingly difficult to come up with any kind of fresh approach to the subject. It would seem the topic has already been "done to death."

Dating a work of art by it's style is always a risky endeavor. Artists very frequently work using "retro" styles, such as that of a whole series on the Waiting for Santa genre by the contemporary artist, Jan Hunt (above). The style is very much reminiscent of 19th-century etchings though the art and artist are very much 21st-century. On the other hand, if one is familiar with the artist, it's pretty safe to bet as to dates, as seen in the three versions of the same scene by the quintessential Christmas artist, Norman Rockwell (below).

﻿
Sometimes, the "Waiting for Santa" images can be so similar in style, handling, and composition as to suggest they were done by the same artist. When I first noticed the Haddon Sundblom version of Waiting for Santa (below), I first attributed it to Rockwell. I'm not sure whether Rockwell or Sundblom painted the scene first, but it's apparent that one influenced the other, whatever the case. Sundblom is most famous as the Coca-Cola Christmas artist from 1931 through 1964, and as one of the prime originators of our present-day image of Santa Claus 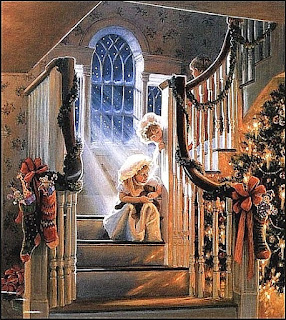 In the vast majority of "Waiting for Santa" paintings, it's not Santa, but the children who are the star of the show as seen in Donna Green's Waiting for Santa (left) or the painting of the same title by the Boston impressionist painter, Candace Lovely (below). Although undated (as are most Christmas paintings), Green's work appears to be from the 1940s as to style but is actually a 21st-century painting. I'm guessing that Lovely's version dates from around 1990 or after. The painting depicts the artist's niece as she succumbed to the same temptation confronting all those who wait up for Santa. Candace Lovely also painted the official White House portrait of Barbara Bush.

Another, somewhat surprising Waiting for Santa theme revolves around various pets (but mostly kittens and puppies (below) as they presumably wait to nibble at any leftover milk and cookie crumbs left for Santa.

On a totally different level from the cutesy kids, kittens, and puppy dogs, quite a number of pin-up artists from the glory days of risqué calendar art have also latched onto the "Waiting for Santa" theme as seen below by artists Gil Elvgren (below, left) and R. Fuggetta (below, right).