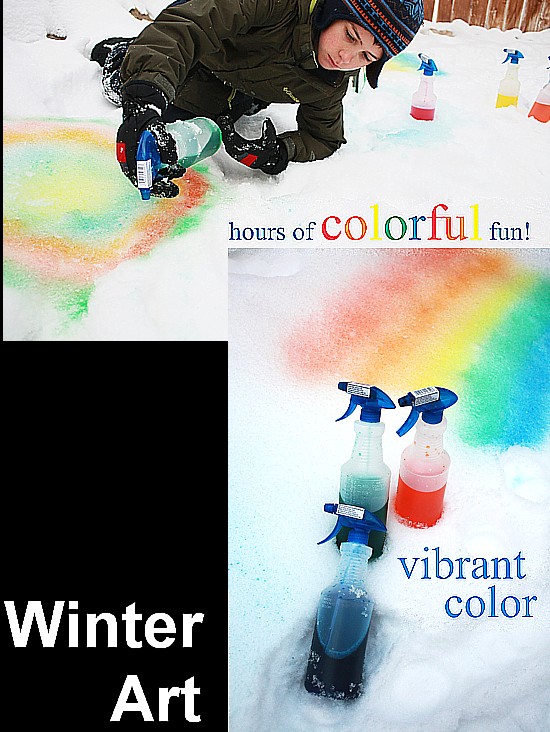 In glancing at the title above, you might bring to mind paintings of winter at its best--snow scenes, city or country, day or night. You might picture the work of painters such as Anna Mary Robertson (Grandma) Moses,  Claude Monet, John Fulton Folinsbee, John F. Carlson, or even Jim Lane. However, in this case I'm talking about painting on snow. That's no typo. I'm referring to the fine art of using a snow-white canvas of white snow upon which to paint. I've already dealt with snow sculpture (although some such artists choose to paint their creations). Painting snow and painting on snow are two distinctly different art forms with totally different "rules," techniques, values, and mindsets. In fact, some snow artists don't even use paint (below).
When I first set out to explore the art of painting on snow I went in search of the usual broad range of professional snow painting artists. It didn't take long to realize what a naïve approach that turned out to be. For various reasons, not the least of which is the virtually non-existent archival element, all I found was a number of talented amateurs. Painting on snow is, after all, fun. Actually, the main emphasis I encountered was that of entertaining children on snowy days when schools were called off. At first I was disappointed, but then quickly came to realize that if painting on snow was the realm of school children, then so be it. As a former elementary art instructor, far be it from me to belittle such art "work."
Although there are few "rules" in painting on snow, there are some factors to keep in mind:
1. Snow disperses color as with the snowy decorated evergreen (above). Expect pastel tints if you dilute food coloring with water in a spray bottle.
2. Bright colors demand pure food coloring (upper images above).
3. Liquid colors tend to melt the snow except in extremely frigid conditions (at which times no one, especially young children, should be out painting on snow).
4. There is a learning curve. Start small. Then once you find what "works" and what doesn't, go for the spectacular.
5. Painting large scale works leaves footprints. Experiment--learn how to deal with them. (There are a number of ways depending on the nature of the snow).
6. Jettison any traditional thoughts of permanence. An hour is good, a day is great, a week is fantastic (and damned near unheard-of).
7. Expressionism or Symbolism are the best styles to emulate.
One of the disadvantages of painting on snow is that snow tends to lie flat on the ground, or at best on a sloping hillside, (which demands the added skill of a sure-footed artist). A fairly "wet" (and deep) snow provides one way to remedy this limitation. Simply recruit some strong hands and arms to roll up a large snow-ball (much like the base of a snowman). Then, leaving it on its rounded edge, use a 2-by-4 or a piece of plywood, to flatten out the surface to be painted. Use "clean" snow to cover up any debris which may have been picked up along the way. Then draw on this smoothed surface with a stick, the image to be painted. Apply color as desired, guided by the factors mentioned above.

When you have SNOW...lots and lots of snow, and you're tired of sledding, building snowmen, and shoveling sidewalks, try SNOW SPRAY ART! I don’t know how this art craze got started, but it looks like everyone is doing it. Probably because it’s a blast! Inasmuch as traditional paintbrushes are of little use in painting on snow, water and food coloring or even diluted dry tempera can be used in a discarded spray container. Here the use of stensils is quite appropriate while also allowing the combining of multiple shapes and colors into abstract images. Try Jackson Pollock's drip-and-splatter techniques (in diluted form, food color washes out of clothes quite easily). 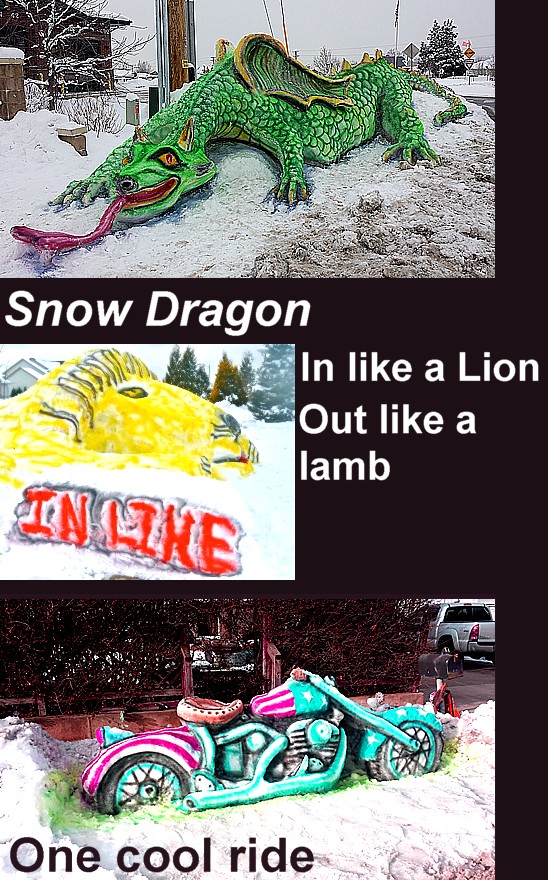 Once you've become fairly adept, along side the creation of a vertical "snow canvas," mentioned above, spray painting snow goes hand in hand with snow sculpture. Once more, start small. Save the your full-size version of the Statue of Liberty for when you turn "pro." Try first sculpting a cat or dog, or perhaps the head of President Trump (several times life-size, of course). Varying concentrations of orange Kool-Aid should suffice for flesh tones and the hair.
﻿

Simon Beck, who bills himself as "the world’s first and most famous "Snow Artist," proudly displays a new work of art--a massive snow dragon (left) that he drew by walking in the snow near Yakutsk, Siberia. His works take anywhere from 5-10 hours to more than a day to create. Beck created this particular work of art for a Russian movie called Drakony.