Today, most people (adults at least) are familiar with the term "oxymoron." If you think about it with any depth and clarity, most of us are oxy-morons. For the benefit of those who don't much think about the word at all, an oxymoron is usually two words put together which seem to be contradictions. Sometimes we refer to them as "figures of speech." One of the most common, derived from WW II, was "army intelligence." My favorite (as pertains to art) is "pretty ugly" followed closely by the similar mismatch, "awfully good." Today, as in the past, one type of art relies heavily (though not exclusively) on the oxymoron for much of its content. The more famous example is a painting of a typical pipe (the smoking device), painted by Belgian artist, Rene Magritte upon which across the bottom, are emblazoned (in French) the words "Ceci n'est pas une pipe" (This is not a pipe). Though such an example involves a phrase rather than a couple words, the oxymoronic contradiction between the words and the image is not lost. That is to say, this is literally not a pipe, it is a painting of a pipe. Magritte originally referred to it as "The Treachery of the Images" but very wisely shortened the title in making his point less obtuse. This painting, from 1929, and most of his others, are but one branch of Surrealism. 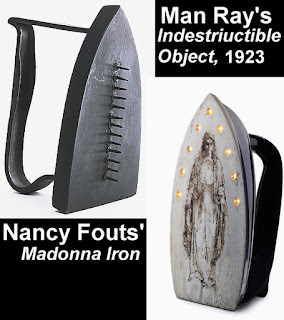 Where there is painting, sculpture very likely marches along arm in arm as with Man Ray's Indestructible Object (upper, left), from 1923 in which he created a truly surreal, oxymoronic sculpture by attaching a line of carpet tacks to the bottom of a hand iron making it impossible to use, and thus giving it no other reason for being other than as a (tacky?) art object. It would seem that the Ken-tucky surrealist sculptor, Nancy Fouts, took her inspiration from Man Ray with her painting/sculpture, Madonna Iron (left). Fouts claims her main goal is to “disrupt roles and associations we give objects, changing orders and mixing things up a bit.” Perhaps the genius behind Fouts' juxtaposed con-nections is how she can pair two sim-ple objects such as in her Butterfly Owl (top), created in 2012, to yield a sculpture that is interesting, insightful, and a little uncomfortable (a beautiful masked predator).

Nancy Fouts pairs unlikely objects together to create a surreal combination of nature, humor, religion, and wittiness into some clever mashups for her Unthink series. One would reasonably presume that a cactus and a balloon would be natural enemies. Yet with her Cactus Balloon (above), Fouts pairs the two. I'm guessing the cactus was grown from a seed inside an airless balloon filled with a moist, nutrient-rich soil. Though American-born, and trained at the Chelsea School of Art and the Royal College of Art, the artist has lived most of her life in London where she pursued a career in advertising while keeping art within arm’s reach by run-ning a gallery with her husband. As a modern-day surrealist, Fouts injects extra-ordinary insight into ordinary items gathered mostly from visits to flea markets, and eBay. 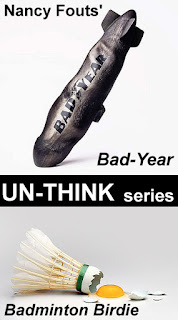 A critic has referred to Fouts as an ‘art prankster.’ She uses playful techniques to changes our perceptions, and in so doing, questioning and changing the roles of objects, icons, and relationships. She uses simplicity and clarity to disrupt the familiar. Although her playful composition makes the piece above both witty and charming, there remains the specter of a creature having found a way to overcome a mute handicap. Fouts frames her sculptures in her studio against a white background to parody stylized consumer product settings, before distorting their functions. In doing so, she brings us into contact with a world that is out of kilter with our sense of normality.
Humor paired with
the profound.
Fouts takes her cue from the Surrealists, producing immaculately executed weird objects, such as a money purse with teeth (above) or skull with dentures. The gallery that represents her, Pertween, Anderson, & Gold, recently asked her to branch out into painting. The results have been a series of customized Old Masters. In her version of Vermeer’s Lacemaker the painting’s occupant is sewing up a tear in the front of the canvas; she has superimposed real antlers onto Monarch of the Glen, and Cezanne’s Black Clock was made a working timepiece. Her "Jesus" series of works (below) reflects much the same thinking.
Fouts and Banksy, the world’s most famous guerrilla artist, think alike. They share the same comedic values, although Fouts’ work is less political. She adds, “Banksy sent me an email saying he loved my work. The only difference between Banksy and me is that he can afford to buy my work, but I can’t afford...his.” On the other hand, Fouts is scathing about the Surrealist move-ment’s most famous name, Salvador Dalí: "He was a prick. He signed old blank pages! He was not a real Surrealist, he was a show off. He was playing the crowd to scratch a money-grubbing itch."