One thing quickly learned by artists wanting to sell their work and make a name for themselves is that they must stand apart from the crowd of other artists wishing to do the same. One of the best ways they may do so is to create works which are in some way eye-catching. Sometimes sheer size alone is the key. Distinctive color is another. I always tended to concentrate on unusual, viewpoint, content, humor, and a generous amount of detail, though for many artists, "expressive" works too. Some artists come by this realization through experience while others seem to have inborn instincts in this regard. I always hung such work at the front of my displays in the hope of garnering a "second look" by the passing art lover. In my own case, often such works were too big and/or too expensive to ring up much in the way of sales. One look at the Greek expressionist Vanessa Poutou's work reveals that she, too, has come to embrace this sales strategy. Virtually all of her paintings are crowd-stopping works--expressive, but not quite abstract figures.
Petit Ballet (above) is one of Poutou's best in the way of showstoppers. The two detail close-ups drive home her penchant for a sort of wildly beautiful expressionism seasoned with just enough objective realism to avoid the age-old, "my kid could do that." Voices 2016 veers toward expressive dance, or possibly (given the title), singing. 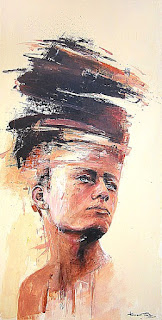 Vanessa Poutou was born in 1979, thus she is, indeed, still in her thirties, though barely so. She is one of several contemporary artists I've highlighted during the past year. Vanessa Poutou studied at Middlesex University of London where, in 2004, she gained a bachelors degree (with ho-nors) in graphic design. Her work focuses on the traditional descriptive depiction, but painted in a modern manner. Emphasis is given to facial expressions and body move-ments, which are reinforced by abstract twists, strong ges-tures and, often, surrealistic elements. Vanessa explores human emotional states such as loneliness, nostalgia, love, eroticism, and the need for freedom. All of Poutou's paint-ings are unique, hand painted originals (sorry, no prints) found in private collections all over Europe, the UK, Aus-tralia, and the US.
Young Werther,
Vanessa Poutou
The Young Werther (above, left) was inspired by The Sorrows of Young Werther, an autobiographical novel by Johann Wolfgang von Goethe. Poutou does not paint people as they are. I paint them as she feel them to be. She conducts a private investigation into their character and personality, exploring her subject to the very boundaries between life and death. Her models often reflect the transcendent act of crossing the border of souls living in the body as seen in her We Are All Drowned in the Aegean (below).