There are a surprising number of art media which have acquired over the years a bad reputation. Among them we might include velvet painting, erotic art, balloon sculpture, macramé, and the fine art of colorizing black and white photos. Some of these art forms were quite popular at one time, only to reach a point in which their popularity caused them to become trite (mac-ramé, for example), now residing in the same category as tie-dyed t-shirts. The latter of these arts I just men-tioned (colorizing photos) may, in fact be one of the most hated of the lot. The art is nearly as old as pho-tography itself and may have derived from the art of painting miniatures. As such artists were suddenly denied a sustenance from their work, they struggled to adjust to the "new" portrait technology during the latter half of the 19th-century. They developed the art of oil-painting (tinting) black and white photos to add a sort of artificially lifelike appearance, which continued well into the 1960s (my 1963 high school graduation photo was oil tinted). Of course, with the advent of color film and printing, even this last vestige of such art quickly disappeared.


It disappeared, that is, until the advent of Photoshop and digitized photography. Although such art today is a far cry from that which photo painters rendered for about a hundred years (1860-1960), it is still not without many of the same crude missteps that caused artists and photo purists to come to despise colorization of the tinted variety. Add to that the fact that most photo colorization today centers around the adding of digital color to historic photos such as that of Red Hawk (above). Some might look at such an effort as creating a whole new (and better) work of art than the original. Others might see it as a horrid desecration of an historic artifact. In any case, this and other examples I've collected here serve to underline a longstanding, ongoing problem in colorization--how much is enough (or too much). The line between the two is very real and very thin.
﻿

Thus, colorization is both a science and an art. That is to say, it takes an extremely astute artist to do it well, while at the same time knowing when to stop. Then there's also the question as to when to colorize and when to leave well-enough alone. Very often I've encountered historic photos in which the addition of color added absolutely nothing to either the human or historic impact of the image. The colorized photo of the Kennedy brothers (right) is a near-perfect example. However, the general store (above) and the famous Depression-era photo by Margaret Bourke-White both benefit greatly from the addition of color. White's American Dream, from 1937, has a gaudy "come alive" quality in the upper region of the billboard which contrasts with the drab, depression breadline beneath it. The result is that colorization strengthens both the sad irony of the message and its visual impact.﻿﻿﻿﻿ Despite its dated imagery, the colorized version speaks to us as vibrantly today as it did in 1937.

One of the most difficult and, indeed, treacherous areas of photo colorization is in the area of portraiture. Questions arise from that of simply "why bother" (as with the Kennedy brothers) to the amount of time the artist pours into a single image. The latter can vary wildly from hours, days, or weeks. Flesh tones often range from a deathly pallor to a made-up look akin the art of an embalmer. As a visual historian, everything has to be colored, from the buttons and ribbons on a uniform to nearby props and furniture. Colorist Marina Amaral recalls spending the better part of a month on an early 20th-century photo of New York’s banana docks (below), agonizing over each hat, face, and strip of fabric in the composition. 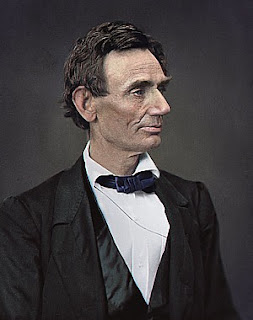 ﻿﻿By the same token, even familiar faces from the dry, black and white history books take on a new life in the talented hands of a competent colorizer, as seen at left in the portrait of Lincoln and below in the image of President Teddy Roos-evelt (the child is unidentified). Albert Einstein seems more friendly in color, though I'm not sure where the black and white or the colorized image of Alfred Hitchcock best captures his macabre persona. Of the colorized portrait of Ab-raham Lincoln, one user observed: “I feel like I’m looking at the man, and not the legend.”
President Lincoln as seen
by Marina Amaral

Why do these reproductions resonate so deeply with so many people? Color images have a greater impact on our visual memory, and allow details we might otherwise gloss over to leap off the page. Marina Amaral’s colorization of Migrant Mother (below), the iconic Dust Bowl image by Dorothea Lange at a California migrant camp is already stunning in black-and-white. It looks strikingly familiar in color. Every detail, from Florence Thompson’s sun-burnished skin to the frayed fabric on her tattered sleeve, the scuffs of dirt on her son’s cheek, all seem to take on new dimensions and feel more alive. The hardship embodied is timeless, more viscerally human.

﻿
Technology and the accessibility of software like Photoshop have allowed colorizing to become not just an artistic hobby, but for artists like Dullaway and Amaral, a career. Amaral first began to experiment with colorizing in 2015 on a cache of black-and-white World War II photos she found online. The artist is now collaborating on a book, The Color of Time, with historian and author Dan Jones. She restored over 200 historical photos for the project, many of which have never been seen in color before. Amaral confides, “I never imagined or planned that colorizing would become my profession or that I would built an entire career out of this."


Although purists may take offense at the idea of reworking history, there’s no question that these images have a powerful effect. Black-and-white images seem sort of alien in that they feel like relics from a bygone era. In grayscale, a historical photograph seems trapped under museum glass. When color is added, everything changes--wars are waged, leaders assassinated, a nation’s greatest moments of pride and disgrace are somehow made more real. Color doesn’t just make these images attractive or more palatable, it throws humanity into high relief and forces us to see historical events as things that happened in real life to real people, not events that turn like pages of a history textbook. It's right there in front of us. It takes us there almost like a time machine.
﻿

Colorizing artists often receives messages from strangers thanking them for help in gaining a better understanding of historical images after seeing such work in color. These artists often hear from people who are not really history fanatics, but who have started enjoying history on a deeper level once they’ve seen colorization and how it affects the human mind. That’s not to say there isn’t backlash. Colorizing artists are sometimes accused of “defiling” history, though most see their work as more of a complement than a replacement. (For what it’s worth, color photography elicited its own fair share of criticism back in its early days.)