This being Christmas Eve, I've been reviewing my holiday musings on various past yuletide topics. Over the years as I've pursued art now and then on a daily basis, I've had the occasion to write quite a number of items relating to art and Christmas. Quite frankly, I find it difficult to add much to what I've already written on topics such as Christmas cards, Christmas trees, over-decorating, really weird Santa paintings, and even boxing day (to name just a few). When I told my wife I was going to write about Mrs. Santa Claus, she suggested I was getting rather "hard up" for ideas. She was right. Somewhat to my surprise though, as I began to do a little research, I discovered that there was no shortages of artwork featuring Mrs. Claus. And like so much art, the work ranged from amazingly good to the godawful. Here's a little of both. 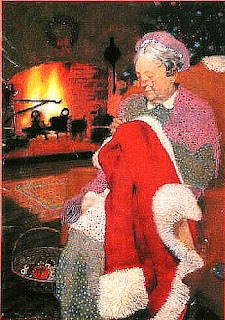 Although Santa Claus (or St. Nicholas) is centuries old, it's unclear precisely when, where, and how he acquired a wife. It would appear to have been sometime within the past hundred years or so (there is little or nothing on Santa's spouse much before 1900). My own effort to accurately depict the couple came in 1971 with He's Makin' a List (above). Like the wives of so many famous men, Mrs. Claus has long lived in the shadow of her husband's presence. Other than the painting above, I've made an effort to avoid dual portraits, con-centrating on depictions attempting to capture the kindly essence of Mrs. Claus' (for the most part) grandmotherly image as seen in Mark English's depiction (right).
Mrs. Santa Claus,
Mark English

I think my own favorite portrait of Mrs. Claus is that of Josh Herman (above). I'm not certain I can put my finger on exactly why it's my favorite. Perhaps it's the "kind and gentle" look. It would definitely seem appropriate as to style next to many of the portraits I found of Mr. Claus. Although competently painted, it would not be hard for me to choose my least favorite rendering of Mrs. Claus. That would be the digital portrait of Mrs. Santa Claus by Grzegorz Rutkowsk (below). It's obviously Santa's second (trophy?) wife.
The subject of Mrs. Claus has largely been ignored by famous artists. Even Norman Rockwell, who painted virtually every other aspect of Christmas, neglected to leave us his version of the couple. The only exception I found by a famous artist is that of Cindy Sherman, best known for impersonating important women in her photographic at. Her Mrs. Claus (below) while not at all flattering, is typical of her other images along this line.


When encountering paintings or other images of Christmas, Santa, and especially Mrs. Claus, it's hard not to allow traditional depic-tions to color our judgements which, with other types of art, would otherwise be far more unbiased. Art would be quite bland were it not for the more creative approaches painters and others so frequently employ. Traditional renderings of familiar subjects have always tended to bind these efforts, especially when the religious and cultural images from the past are so beloved. And while we may not like attempts by artists to "break the mold," that does not make them any less valid in speaking broadly of art in general or Christmas art in the narrower sense. The works of Cindy Sherman, Grze-gorz Rutkowsk, and Helena Bebirian (below) fall into this category.
﻿ 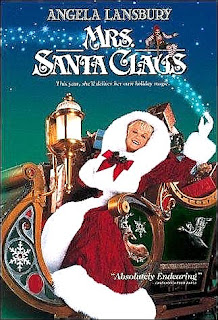 And, as badly as I hate to admit it, the embroidery patterns (below), and what I've labeled Mrs. (awful) Claus (below that) likewise fit the same definition--art which breaks the mold. In such cases, the art comes first, Christmas is nothing more than just another content area (one of millions) the artist might choose. By the way, did you know that Mrs. Santa Claus has her own movie starring Angela Lansbury (right)? I can't think of anyone better to play the part. Check out the clip at the bottom.
Angela Lansbury as
Mrs. Santa Claus