Not too long ago a reader sent me an e-mail discussing one of my posts at which time he asked, how and where I came up with the broad variety of content areas he found so interesting. There is, of course, no single answer to that. Often they come from a news item I come across on the Internet. At other times they simply reflect some artist or art interest I find fascinating myself and wish to probe deeper, hoping those reading my words will enjoy the effort. In the case of Anish Kapoor, my wife, who has very little interest in art, brought a small news article to my attention. I'm ashamed to admit that the name didn't immediately "ring a bell," though it should have. While in Chicago a few years ago I almost saw (experienced would be a better word) his most famous work. I had, in fact written about the British sculptor's Cloud Gate (below, a.k.a. the "bean") located in that city's Millennial Park. I say I almost saw it inasmuch as the park and Kapoor's massive, polished mass is right next door to the Art Institute of Chicago where I spent an entire day. Had I known the art landmark was so nearby, I would definitely have found the time to pay my respects.
﻿ 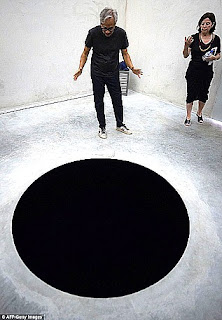 The news item that caught my wife's eye involved an unfortunate mishap in which an elderly man accidentally fell into one of Kapoor's site specific "sculptures" titled Bottomless. It wasn't, of course, only some eight feet deep with the sides painted black to give the appearance of a bottomless abyss. The Italian man in his 60's was slightly injured from the mishap. Bottomless (left) is a part of Kapoor series called Descent into Limbo displayed at the Serralves Museum in Porto, Portugal. The unfortunate art lover has since been released from the hospital.

Kapoor and curator Suzanne Cotter stand next to Descent into Limbo (1992) at the Serralves museum.

Along the same line as his earlier Bottomless, Anish Kapoor’s endlessly spinning whirlpool titled Descension (below) has descended on Brooklyn, NY, located at pier 1 in Brooklyn Bridge Park. The continuously spiraling funnel of water penetrates the earth in a powerful rush of ceaseless motion, drawing viewers into its mystifying and mesmerizing abyss. It turns an ordinary material (water) into a strangely behaving substance, disturbing the familiar notions of our world. The 26-foot in diameter installation creates a striking jux-taposition to the adjacent East River as it continues Kapoor’s long-standing interest in the destabilization of the physical world. The spiraling whirlpool is treated with an all-natural black dye, creating a seemingly endless hole, into which visitors are invited to carefully peer (this one has a railing).
Anish Kapoor is a leading contemporary British-Indian artist working in large-scale abstract public sculpture. Throughout his career, Kapoor has worked on a variety of scales and with diverse materials—mirrors, stone, wax, and PVC—exploring both biomorphic and geometric forms with a particular interest in negative space. Born in 1954 in Bombay, India, Kapoor moved to London in the late 1970s, studying at both the Hornsey College of Art and Chelsea College of Arts. He first gained critical recognition for his work in the 1980s, with his metaphysical site-specific pieces in which he manipulated form and the perception of space. Kapoor was awarded the Turner Prize in 1991.
﻿
One of Kapoor's favorite work is 1000 Names (above), dating from 1979–80. Being from India, Kapoor relates emotionally to the pieces of the work, which are made in pigments with extraordinarily exotic shapes. They are a source of wonder, luscious, beautiful, delicious and very sensual. Those early works were unlike anything ever seen. However, quite apart from his work with pigments, holes, and other disquieting shapes and media, Kapoor is undoubtedly best knows for his "shiny stuff" such his Spire (top) or his Tall Tree and the Eye, seen at right when displayed in Paris in 2009. Kapoor is intrigued by the empty spaces between and within the shapes he has made, and by the endless, repeating "fractal images" reflected on their polished surfaces. Turning the World Upside Down (below) dating from 1996 is typical of Kapoor's "spacey" work.

For the 2012 Olympic Games in London, Kapoor created the ArcleorMittal Orbit (below), now the UK's tallest sculpture. Standing 114.5 meters tall, the sculpture was erected at the cost of a whopping £22.7 million. Designed by Kapoor and structural designer Cecil Balmond, the work is a tangled steel lattice incorporating the five Olympic rings. Sponsors hope the tower will attract one million visitors a year to Stratford's Olympic Park. The ArcelorMittal Orbit sculpture, is 22 meters taller than the Statue of Liberty, and has two observation floors with a spiral staircase consisting of 455 steps. The iconic attraction hopes visitors will be attracted by the architectural design and detailed integration; enough to want to take the elevator to the top and then maybe walk down the spiral staircase. Kapoor's enormous sculpture easily dwarfs the aspirations of Gustave Eiffel.

Kapoor’s newer work includes his first paintings in years, though they stretch the description of a painting somewhat. There's paint, of course, but also silicon, and white resin applied deep and wide on canvas. Some of the paintings project as much as two feet from the gallery wall. These creations hang precariously, their apparent weight seemingly defying gravity itself. The initial impression is, as others have noted, that of a three-dimensional Francis Bacon, though Kapoor's works have a more savage quality. It’s pretty hard not to think of slabs of meat, with the sinews, bone, gore and eviscerated flesh both shocking yet, in the painting's hidden depths, truly mesmerizing. Are they his reflection on a particularly barbaric moment in our contemporary history? The artist contends, "I'm not going to exclude it. But I’m not going illustrate it either. I’m not a journalist. I don’t want to have anything to say, it just gets in the way. I think the journey of an artist is a journey of discovery and some engagements with paint, with the nature of material, and bodily things."