Growing up way back in the 1980s, our son was quite fascinated by dinosaurs. Like hundreds of thousands of other kids, now and then, he enjoyed the pastime of playing with his collection of as many as two dozen plastic toy dinosaur replicas of various sizes and degrees of scientific accuracy. He outgrew them, of course and in his case moved up to live ones, I can recall more than one snake, chameleons, even a not-altogether-friendly iguana. They have, of course, all gone to that great snake pit down below, but the toy ones remained. I used to cart the whole lot into my elementary art classes for the kids to draw. There were enough of them they each could choose a different one to star in their imaginary prehistoric jungles. More recently my nephew, who's five years old, claimed the whole lot of them as if he'd discovered buried treasure.
﻿

Over the past couple centuries, artist too have embraced this paleontological subject with similar fervor. Artist at all levels from scientific illustration, illustrations in children's books, even cartoonists, have lingered with their childhood intrigue. One of my favorite comic strips in growing up was the caveman Alley Oop (left), who rode to and from his various misadventures on the back of his pet dinosaur, a Ceratosaurus named Dinny. First created by the cartoonist, V.T. Hamlin in 1930, Alley Oop is still riding high today in the hands of writer Joey Alison Sayers and artist Jonathan Lemon as of January 2019.
Prehistoric time traveler.

Dinosaur art presents two theoretical problems. First, the natural tendency for artists is to paint and draw images they and others can relate to easily. A cartoon strip or children's storybook is far more captivating when human figures, be they the likes of Alley Oop or writer and illustrator Dennis Nolan's ten-year-old Wilbur in his juvenile literature classic, Dinosaur Dreams (above). Yet conventional scientific thinking places human development several million years after the Jurassic period when dinosaurs were out and about. However, some archaeologists and paleontologists claim to have found evidence in prehistoric carvings (below) and paintings of human hunters pursuing dinosaurs among their other prey.
Moreover, the Bible in the final chapter of Job (40:15-24) as depicted by the 19th-century British artist, William Blake (right), mentions the behemoth or leviathan, which many con-servative theologians contend is a scriptural reference to dinosaurs, though many others conjecture that the creature may well be an elephant, hippopotamus, rhinoceros, buffalo, or giant crocodile instead. Still others believe that this powerful creature is to be seen figuratively as the Devil or a composite of mythical creatures with enormous strength, which humans, like Job, could not hope to control. More recently, the World News Daily (a Zionist newspaper published in Israel) reports that a 67-year old shepherd in Kuwait, looking for one of his animals, stumbled upon what could be one of the most astonishing discoveries of modern archeology. The man noticed a barely visible entrance to a group of caves covered with prehistoric art depicting many humans and animals, but also depic-ting a few live dinosaurs, bringing many questions concerning the chronology of the extinction of these gigantic creatures (below).
The second "problem" is also theoretical, but one with which only art historians and museum curators might be concerned: is it a dinosaur or a dragon. There are few instances of dinosaur art much before the early 1900s, but hundreds, perhaps thousands, of works in which early (mostly Medieval) artists depicted dragons in combat with any number of historic and fictional figures. There is no firm rule governing this tempest in a teapot, but in general, if you can name the reptilian creature, it's probably a dinosaur. If it breathes fire, it's probably a dragon. If it's a work Japanese artist kazuhiko Sano, (below) it's definitely a dinosaur.

Regardless of the medium, watercolor (left), a child's collage (below), or a children's wall mural (bottom) that only a dinosaur lover could love, and though originating in the distant prehistoric past, dinosaurs are very much a part of the present. I should also note that it's artists, not paleontologists, that keep them before our eyes. 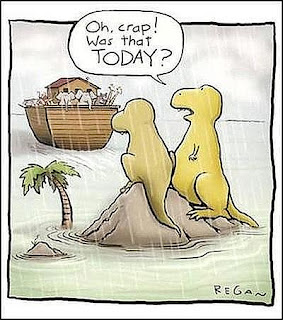