When you travel as much as we do you're advised by travel agents and others who travel a lot to familiarize yourself with the various customs and laws governing the many different countries on your itinerary. The most important of these we tend to take for granted, don't shoplift, try not to kill anyone, and keep your hands to yourself. Then, of course, there are even more stringent laws of nature--days are only 24 hours long, storm clouds mean grab an umbrella, dust storms demand you keep their mouth (and often your eyes) firmly shut, not to mention the ever-present, "What goes up must come down." Likewise, there are laws or rules governing artists having to do with linear perspective, lighting, composition, mixing media, and plagiarism. Yet academic art instructors often advise students to step outside the box, bend the rules, sometimes even break them. Such advise usually comes with yet another stricture, that an artist must first know and understand the rules quite thoroughly before he or she dares contemplate violating them in achieving their goals. Often the most successful artists have been those who learned to skillfully break the rules. Picasso was notorious in this regard, as was Leonardo, Warhol, and a few others.
Not that she's on the same plane as those I just mentioned, but the Spanish painter, Cinta Vidal is one who routinely breaks a number of art rules, often with startling results. Her Living Together (top) and the even more audacious Outing (above) start by breaking the law of gravity, then veer off into various other violations having to do with composition. M.C Escher may have been the first to dare such a departure along with Mark Tansey. Escher made this type of work his trademark while Tansey indulges only occasionally. Cinta Vidal owes a lot to both artists--their influence is unmistakable. Yet her work could easily hang side by side with theirs, serving as simply a point of departure for her in studying interpersonal relationships (or a lack thereof) with her novel juxtapositions.
Vidal attempts to explore the inner dimensions we each possess, which often do not match the mental structures within us no matter how hard we try to synchronize our emotions with our surroundings. When observed from a traditional perspective, these concepts might logically be better investigated with abstraction, but the artist has remained true to figural painting for the entirety of her career. Her creative ideas try to show us just how hard balancing and fitting everything that shapes our daily lives can be. She delves into areas such as our relationships to our professions, and our ambitions seen next to our dreams. Vidal's Co-working (above images) illustrates the lengths she has gone to in order to depict these relationships.

Raised in the small town of Cardedeu, Cinta Vidal lives and works in Barcelona, Catalonia, Spain. She studied at Escola Massana in Barcelona until she was 16, when she started working as an apprentice in Taller de Escenografia Castells Planas in St. Agnès de Malanyanes. There she learned from Josep and Jordi Castells to love scenography and the painting theatrical backdrops. Such a background helped both to improve her painting skills while enabling her to work in many different styles. In addition to her continued work in this field, she also earns a living from what she like to do most, drawing and painting, working on freelance projects for advertising, or commissioned works. In the beginning, her own work used to take but a small amount of her time, but more recently that time has gradually increase.

Once her artistic vocabulary was developed, Vidal began creating complex acrylic paintings on wood panels which reflect how our outer realities frequently do not reflect our inner natures. Manipulating everyday objects and spaces placed in impossible forms. Often colossal in size, the work of Cinta Vidal forces the eyes of viewers to go through a long process of navigation through all the visual elements present in her paintings. In her newer series of works, Vidal focuses intently on intimate relationships, populating her suspended clusters of furniture, animals, and household objects with only two or three individuals rather than a larger population. Her Couples series (above and below) places pairs of characters in opposition to each other, exaggerating her previous explorations of human understanding. In these works two male figures sit back-to-back as they type on their own laptops, a woman peers longingly from an armchair as a man stands facing the opposite direction below her chair, and a boy photographer and woman stare at the same scene, but from flipped perspectives. These works show how two people might hold differing ideals, despite occupying the same community or household.

With her un-gravity constructions, Vidal shows us that we live in one world, but we live in it in very different ways – playing with everyday objects and spaces, placed in impossible ways to express that many times, the inner dimension of each one of us does not match the mental structures of those around us. The architectural spaces and day-to-day objects are part of a metaphor of how difficult it is to fit everything that shapes our daily space: our relationships, work, ambitions, and dreams. She paint realistically (as opposed to working in the abstract) to help the viewer recognize the quotidian space that we all inhabit, assisting them to understand the ordered maze that is this proposal. She intends the viewers to recognize what they are seeing, but to see it in a very different, unstructured, broken way. Vidal's On Chairs (below) illustrates this far better than any words.

Cinta Vidor worked as an illustrator for several years, finding quite enjoyable, the act of switching from the gigantic scale of backdrops to illustrations such as the one below in tribute to a teacher marking his retirement in 2013. Vidal finds it both fascinating and refreshing to feel the difference between painting in a small format, where each stroke is made with a tiny movement of your fingers, and painting backdrops, where each stroke is made with a very large movement of your whole arm. She confesses to having a tendency to paint in a small and tiny format, with a tiny level of detail. However, painting with brushes as big as brooms makes use of the entire body, which is a powerful experience. Huge projects are much more impacting, not only for their size, but for their presence and power, as artists walk and paint over the fabric. That’s something that a plotted picture cannot transmit. 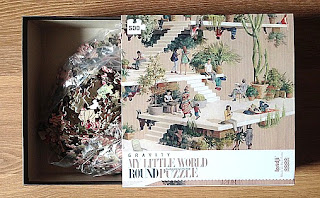 You know you've "made it" as an artists when your work shows up as a jigsaw puzzle. Can you imagine putting togeth-er a puzzle in which there's no up nor down? And to make matters worse, the puzzle shape is round.

For those with about nine minutes to spare--

This one is only one minute long--

Snapshot of an Artist: Cinta Vidal from Selina Miles on Vimeo.