Almost fifty years ago, I earned my B.A from Ohio University in Athens, Ohio. About forty-five years ago, O.U. bestowed upon me a M.A. in Art Curriculum and Instruction. Athens, Ohio, is a strange little community, thought probably not as compared to other university towns. The estimated population is about 25,000, not including another 29,525 students (as of 2018). Perhaps most peculiar is that politically, it's a bastian of progressive liberalism deep in the heart of Trump country. It's an attractive little bastian straddling the Hocking River, nestled in the hills created by the moraine from the last ice age. For the most part, the people are friendly, sometimes to a fault (i.e. nosey). All this and probably more would likely account for the migration of the rising conceptual artist, Lizzie Fitch and her longtime partner, Ryan Trecartin (above) from the megalopolis of LA. to the quiet little "burg" sometimes referred to as "Harvard on the Hocking."
Athens is also a rather unlikely site for an amusement park, not to mention movie sets and ghostly female figures straight from a "B" movie horror picture show. Yet those represent the creative presence of Fitch and Trecartin. The two were originally from Ohio. Their hyperkinetic video works have one thing in common: a sense of overload, both linguistic and visual, leaving the viewer pleasantly adrift. Whether Line, the center-piece of a new exhibition at the Fondazione Prada in Milan, is no exception. It’s a whirlwind tale of rural gentrification, Amish identity, queer dance parties, DIY real-estate projects, and what happens when Mid-western manners are confronted by surreal bad attitudes.


The two conceptual video artists began developing a tract of land into an ever-evolving video set. They built a massive house (above) as part of a postmodern fever dream that nonsensically Frankensteined unrelated design elements into one semi-cohesive whole. Fitch and Trecartin are now continuing to expand their land into a sort of art-damaged amusement park. Building such a place with their own hands has not been a "walk in the park." They had a landslide, a mudslide. There was an unprecedented rainfall, and none of the buildings were done in the way that we originally envisioned, because of extreme weather delays. Farmers were even getting FEMA money. They ended up digging out the mud with their bare hands. The house they made combines wildly different styles and features into one. It's almost ready to move into--except for the septic system.
Whether Line explores the idea of a culture clash between all of the characters seen in the movie. Lizzie Fitch notes that almost everyone they’ve met has been very open, accepting, and curious. hey do have one neighbor, though, who’s very extreme. He definitely inspired a lot of the content in the movie, indirectly and directly. But that’s just one person in a whole community around them. They tell people they're making a movie. Then they jokingly add that they’re building an amusement park. But it’s not really a joke. They are, it’s just not a traditional one. There are certain traits of reality TV that went into the conception of Whether Line, particularly peoples’ new relationship to acting, and also the fear of acting. Ryan Trecartin explains that years ago, if someone asked non-actors if they would be in a movie, it would be, "Hell yeah! I want to be in the movie!" Now, however, they ask questions: “What’s the context? Where’s it going to show? What’s the meaning?” Fitch believes everyone has a relationship to their mediated self. Today, a lot of people have a fear of context being weaponized. People are more wary. There is more anxiety around cameras than there was just five years ago.
On the sets of Whether Line, it always seems like everyone involved is having a lot of fun, as if it’s all a big, sprawling, unwieldy party. However, some scenes are difficult and painful with everyone working really hard, often doing every line 25 times. Fitch points out that it looks like way more fun than it is. Of course there are other scenes that are really quite a lot of fun to shoot. It depends on how they decide to direct the script. Sometimes it’s line-by-line, very formal, and other times the script is little more than a suggestion. While there is an agenda to it, there is also a lot of space for improv and invention and for people to add content and ideas. Those shoots are usually a lot more fun. 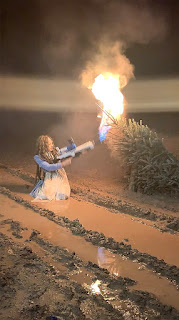 Much of the film is about finding a perfect place to settle. Have these artists done so? Although Fitch and Trecartin seem to love their new creation in its most unlikely setting, there's also talk of maybe moving somewhere for a year to do their next project. They plan to continue to add to their Athens County park and build it out. At this point, exhaustion has set in. Fitch insists she's not going anywhere fast. "This is the first time we’ve ever owned anything. We’re definitely not going to sell it. This body of work has just started."

Production still from Whether Line