Let me first admit, I don't like prison movies. I've never seen one I liked. They're dismal, they're creepy, they're dark, they're depressing, and very often fall into ugly stereotypes which they, in turn, serve to proliforate. They play upon despair. Very rarely are they about hope. Very rarely do they rise to the level of Frank Darabont's 1994 Shawshank Redemption. While I'm at it, I might as well admit I'm not particularly fond of this prison movie, for many of the reasons listed above. Yet, if I had to choose among the hundreds of films in this genre made over the past hundred years of movie history, this would be at the top of my list. It's also at (or near) the top of several list of all-time greatest films. That's surprising in itself, in that when it was released, while praised by critics, it barely made back its $18-million budget or it's $25-million cost. While most movies fade in popularity over time, The Shawshank Redemption has grown to be as popular on TV, and in DVD release, with viewers as it was with critics.

The Shawshank Redemption movie script was based upon a novella written by the famous horror story author, Stephen King, as part of a 1982 anthology titled Different Seasons. King's original title was Rita Hayworth and the Shawshank Redemption, subtitled, Hope Springs Eternal. The title was shortened before filming began when various Hollywood starlets began applying for the role of Rita Hayworth, thinking it was a film biography. She's not even seen in the movie. A poster of Raquel Welch was substituted instead. Screenwriter Frank Darabont paid King $5,000 for the rights then wrote an adaptation in a mere eight weeks. Director, Rob Reiner, read the script; like it; and offered Darabont $2.5-million. Although tempted by the prospect of an incredibly quick profit, Darabont made the risky choice to "do it himself." He'd never directed a film before.
Apart from the script, casting a film is always the first and most important decision a director and producer make. Darabont's first choice for the lead role of Andy Dufresne was Tom Hanks. That would have been an easy choice, except for the fact Hanks was committed to playing Forrest Gump at the time. Kevin Costner was the second choice but he was busy drowning in Waterworld. The usual Hollywood "A-list" were also considered, including Tom Cruise, Nicholas Cage, Johnny Depp, and Charlie Sheen. Sheen turned down the role (a decision he later deeply regretted). Others lost out for various reasons, leaving the part, somewhat by default, to Tim Robbins. The character of Ellis Boyd "Red" Redding was original written by King as an aging white Irishman with graying red hair. Such bankable stars at Paul Newman, Clint Eastwood, Harrison Ford, and Robert Redford were considered but Darabont insisted upon Morgan Freeman for his deep voice as narrator, and his authoritative screen demeanor.
A director's next most important decision centers around the "look" of the film, which, in modern-day filmmaking involves the choice of an authentic looking location as much it does the talents of any art director, set decorator, or special effects coordinator. Though a surprising number of communities and institutions have laid claim to the distinction, The Shawshank Redemption was filmed at, arguably, the ugliest, most outdated prison in this country (perhaps any country) at the time, the Ohio State Reformatory (top) located in Mansfield, Ohio (since partially torn down and now a tourist attraction). The 19th-century horror story in stone embodies all the worst facts and fictions attached to prison life. This place was no federal country-club, not even a respectable chain-linked, human warehouse. The word "dungeon" comes to mind. In 1994, the ancient Mansfield prison was in such bad shape parts of it had to be renovated before shooting could begin.
﻿
﻿Although The Shawshank Redemption follows the formula of fear, loathing, violence, corruption, and despair permeating most prison movies, its underlying theme is one of hope. Undoubtedly, this one, single difference is primarily responsible for the film's latent popularity (that, and the fact that men are overwhelmingly responsible for choosing rental movies). Andy never loses hope, Red has lost all vestiges of it. With a cast of a thousand criminals, the villains are guards and prison officials (below). Although virtually all of the traditional prison movie themes assault the viewer's sensibilities for over two hours, the plot is neither traditional nor predictable. The film resonates in countries all over the world where prison conditions are worse (and better) than here. Despite this, foreign distribution has presented problems. "Shawshank" means even less overseas than here and the word "redemption" often does not translate well. In Finland, the film was marketed as Rita Hayworth, the Key to Escape (talk about giving the plot away). In Taiwan, it was called 1995 Fantastic (the year it was released). The Chinese like action films. In Israel, the title was more appropriate: The Walls of Hope.
If hope is the overriding theme, a number of allegorical elements have also been read into the story, even equating the figure of Andy to that of Jesus Christ. Self-worth and integrity (so rare in prison) have also been mentioned. Freedom, even in prison, is as much a constant element in the story as a lack of it on the outside. Freedom, is, after all, a state of mind. Even the obligatory "happy ending" is one steeped in profound meaning (below). 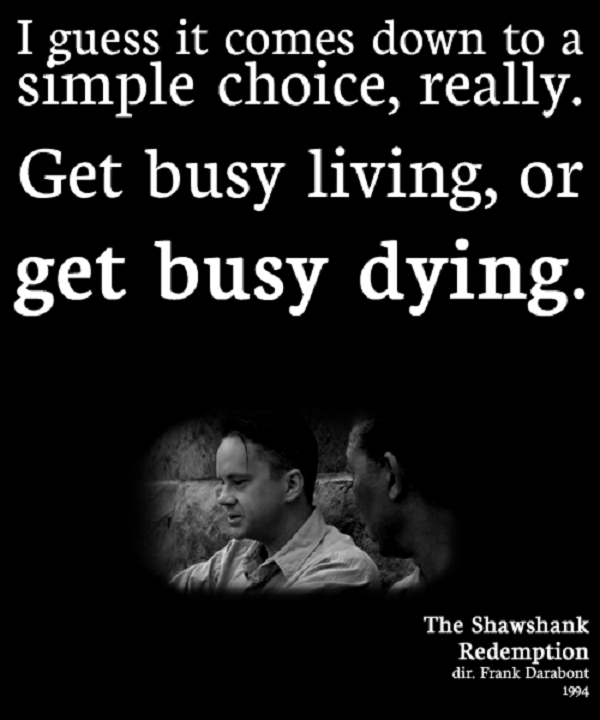