Few Americans know what it's like to live through a war which threatens the very survival of their nation. Yet it's happening today, in places like Syria, Palestine, Israel, Afghanistan and the Ukraine (to name just a few). It's been 150 years since the American Civil War. And even during the worst years of WW II, the survival of the United States of America was never in doubt. However, at various points in time, nearly every country in Europe was so threatened. All survived. None remained unscathed. As horrifying as wartime encounters are, they also strengthen the moral fiber of those who survive, not without scars, but with a new appreciation for their culture, lifestyle, system of government, and the abiding freedoms for which they so desperately fought. Art has long been used by governments as a means of spreading these intensely felt, patriotic elements to succeeding generations. Art also serves to remind those of us, who have been fortunate enough to escape such horrors, of what might have been and what could be. The British government in particular was exceptionally cognizant of how valuable the work of artists could be in this regard. During both world wars, they had a small legion of artists, at home and on the fronts, charged with capturing on paper and canvas some semblance of their very real struggle to survive, and the immense price paid by military and civilians alike in winning the war. Carel Weight was one of these artists.

Carel Weight was born in 1908 to middle class, working parents. He grew up in the Paddington section of central London. The rough treatment he experienced at school and the squalor which his classmates endured had a profound effect on his later work. Weight joined the Hammersmith School of Art in 1926 before continuing his education at Goldsmiths under artists such as Gardiner, Mansbridge, and Kokoshka. Weight's first exhibition came in 1933 and was well received. When war came in 1945 Carel was very briefly recruited for active duty before Kenneth Clerk helped him gain an appointment as a war artist. He produced images of the war in London, Greece, Italy and Austria. Whether at home or abroad, Weight's paintings usually depicted suburban settings in which unexpected human dramas occurred, some humorous, some frightening. In each case the painting's location was chosen specifically for its abstract structure. The people grew from the artist's imagination.

During the war, Weight seems to have spent a great deal of time following the British army north, up across the "boot" of Italy, judging by the number of paintings documenting the wartime destruction in cities such as Rome, Pisa, Verona, Florence, and several smaller towns along the way. One of his scenes from Florence, a painting not of the city's famous Ponte Vecchio, but from it, (right) bears witness to the creative impulses so dominant in Weight's work despite the restrictions and difficulties to be encountered paint-ing a war in a foreign country. His painting Between Two Fires: A Dream (below) depicts St. Peter's Square, provideing a rarely seen viewpoint of a city largely spared from wartime destruction.

As impressive as Weight's foreign service work as a war artists may be, his paintings of the intense, prolonged, firebombing of London during the Blitz captures not just the random destruction of large city neighborhoods, but the terror endured by the residence of the city as the war blasted its way into their homes, businesses, and workplaces, leaving them with scars as much psychological as physical. 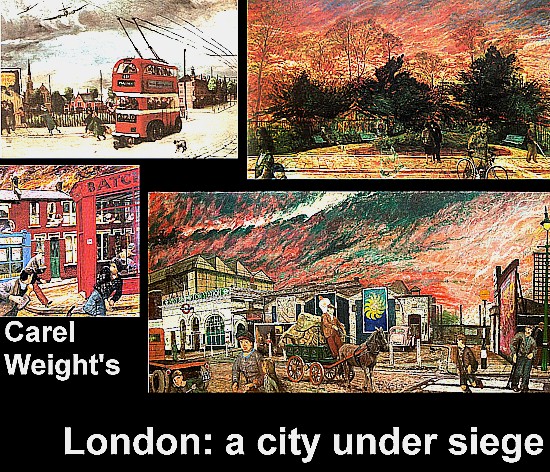 Along with the horrors of war, there was humor too. Weight painted four piece series detailing the trials and tribulations of trying to recapture a Zebra which escaped from the London Zoo during a bombing raid (below). Animals try to escape the terrors of war just like humans.

In 1947, following the war, Weight began teaching at the Royal College of Art, where he served as a professor of painting from 1957 until his retirement in 1973. Weight's 1952 painting,The Coronation Procession Returning to Buckingham Palace (top) captures the immense pride, pomp, and circumstance of a nation in crowning a new queen, Elizabeth II. Even in peace time, no nation is without tragedy. Weight's The Battersea Park Tragedy (below) depicts the 1970 fire which took place at the London amusement park. A rollercoaster accident in 1974 resulted in the deaths of five children permanently closed the Fun Fair section of the park.

In 1962 Weight was appointed to The Most Excellent Order of the British Empire for his contributions to the arts and sciences, his work with charitable and welfare organizations, and his public service outside the Civil Service. He was elected to the Royal Academy in 1965, and became a senior R.A. in 1984. His work is owned by the Tate Gallery and the Victoria and Albert Museum. Weight's most important post-war commission came in 1963 in the form of a painting over the entrance to the chapter house of the Manchester Cathedral. Titled Christ and the People (below) the mural painting, using acrylics and oils on stone, is done in such a way that it appears at first glance to be a stained glass window. Weight died in 1997 at the age of 88. 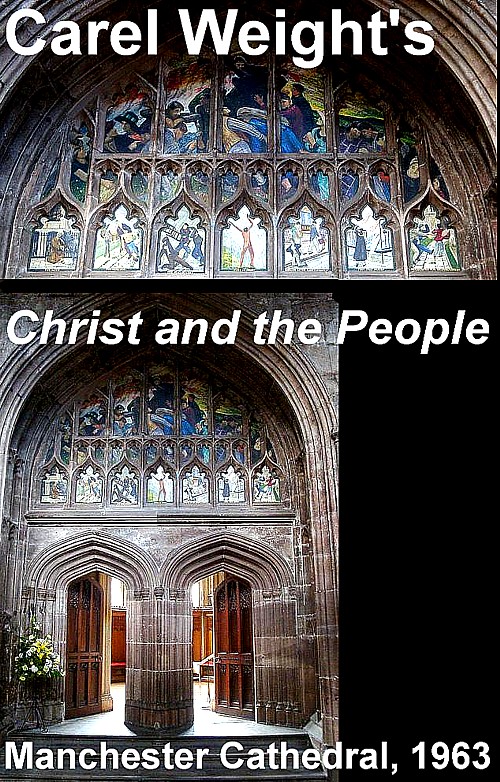