The Artists of Charlie Hebdo

Just over thirteen months ago now, January 7, 2015, eight staff members of the French satirical magazine Charlie Hebdo lost their lives... shot down, MURDERED, MASSACRED at their desks in a terrorist attack by Islamic extremist gunman. Five of them were artists...political cartoonists. Thankfully, it's not often, now or in the past, that artists have been forced to give up their lives because of their art. There were undoubtedly some instances in the past under the Nazis in Germany, the Communists in Russia, and under Mao is China when political cartoonists were killed for, in effect, being too good for their own good at what they did. I'm not aware of any specifics as to such instances nor any details involved. Whatever the case, there have probably been too many of them to mention in this context. However, that's not the case in this case. Once the smoke cleared, among the dead were cartoonists, Philipe Honore, Bernard Verlhac (Tignous), Jean Cabut (Cabu), Stephane Charbonnier (Charb), and Georges Wolinski.

Stephane Charbonnier (Charb) was born in Conflans-Sainte-Honorine in 1967 and raised in Pontoise. Stéphane's talent for drawing was discovered in school. He published his first drawings in Echo des collégiens at the age of fourteen. He continued to draw while studying at Lycée Camille Pissarro. In the late 1980s. He started working as a cartoonist, creating cartoons for the newspaper Les Nouvelles du Val-d’Oise, L'Écho des Savanes, Télérama, and L'Humanité. He joined Charlie Hebdo in 1992 and had been its editor-in-chief since 2009.

Philippe Honoré was a self-taught artist born in Vichy in 1941. He grew up in Pau, first published in 1957 in a regional newspaper, Sud-Ouest. He began his career as an industrial designer for a natural gas supplier. Honoré had a long career in newspaper and magazine cartoons, working with dozens of publications, including Libération, Le Monde, Les Inrockuptibles, La Vie ouvrière, Charlie Mensuel, Le Matin, and Expressen. He also illustrated book covers, including the anniversary edition of Petit Larousse. He became a staff cartoonist for Charlie Hebdo in 1992. With its thick line (somewhat reminiscent of woodcuts), and strong reliance on black-and-white, Honoré's style stood out from the other Charlie Hebdo cartoonists.


Bernard Verlhac (Tignous) was born in Paris in 1957. He studied drawing at the École Boulle. After working in the comic book field, Tignous began doing cartoons for L'Idiot International, La Grosse Bertha, and L'Événement du jeudi. Tignous first began working at Charlie Hebdo in 1980, rejoining the weekly when it was reborn in 1992. He was also a contributor to the weekly news magazine Marianne and the monthly publication Fluide Glacial. In addition, he drew for Télérama and L'Echo des Savanes. Tignous was a member of Cartoonists for Peace as well as the Press Judiciare, an association of French journalists covering the legal system. He was one of the founding sponsors of Clowns without Frontiers, the French affiliate of Clowns without Borders International. He was the father of four children.


﻿
Jean Cabut (Cabu) was one of the most beloved cartoonists in all France. He was born in 1938 in Chalons-en-Champagne, beginning his studies in art at the École Estienne in Paris. His drawings were first published by 1954 in a local newspaper. Drafted into the French Army for two years during the war in Algeria, Cabu produced cartoons for the army magazine and also for Paris Match. His experiences in Algeria turned him into a virulent anti-militarist, a relentless proponent of non-violence and critic of the French political establishment. In 1960 he became one of the founders of Hara-Kiri, a satirical magazine banned by French President Charles de Gaulle's administration. In 1970, the magazine changed its name to Charlie Hebdo. His best known character was Mon Beauf (“My brother-in-law”), an incarnation of bovine French provincial complacency. So accurate was the caricature of an average, racist, sexist, vulgar, ordinary Frenchman that the word 'beauf' came into everyday use meaning much the same as our American term, "redneck.". In 2006, Cabu drew a caricature of the Prophet Muhammad with the caption “Overwhelmed by fundamentalists” in which he portrayed the Prophet saying “It’s tough to be loved by these jerks.” He was a co-owner of Charlie Hebdo.

Georges Wolinski was born in 1934 in Tunis, French Tunisia, to Jewish parents. His Polish father, was murdered by the Nazis in 1936 when Wolinski was two years old. His mother was a Tunisian of Italian descent. They moved to Paris in 1945 shortly after World War II where Wolinski started studying architecture. After graduating, he began cartooning for Rustica in 1958 before starting to drawing political cartoons in 1960. Three years later Wolinski began contributing political and erotic cartoons and comic strips to the satirical monthly Hara-Kiri. He served as the editor-in-chief of Hara-Kiri from 1961 to 1970. Wolinski's work appeared in the daily newspaper Libération, the weekly Paris-Match, L'Écho des Savanes and Charlie Hebdo. At the age of eighty, Wolinski was the oldest of those killed. 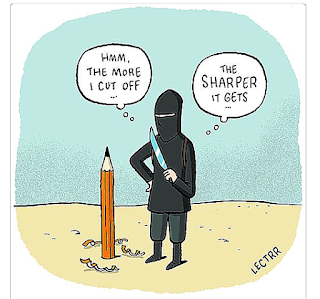 Charlie Hebdo (French for Charlie Weekly) is a French satirical weekly magazine, featuring cartoons, reports, polemics, and jokes. Irreverent and stridently non-conformist in tone, the publication describes itself as secular and atheist, far-left-wing, and anti-racist (below), publishing articles about the extreme right, especially the French Nationalist National Front party (the equivalent of the American Tea Party), as well as religion, particularly Catholicism, Islam, and Judaism. The Charlie Hebdo cartoonists’ bawdy styles demonstrate not just mastery of their art, but also their strongly held belief in the political power of ridicule. From the French Revolution to Honoré Daumier's devastating caricatures of 19th-century political figures such as King Louis-Philippe in a pear suit or Thomas Nast's portrayal of Tammany Hall’s Boss Tweed as a human money bag, cartooning has long been a potent antidote to the excesses of power in government. Charlie Hebdo fits squarely into the French version of that tradition, committed to the idea that the freedom to mock and offend is a driving force of democracy, not just its byproduct.

Charlie Hebdo’s irreverence coincided in troubling ways with a growing anti-Muslim movement that hides behind the banner of secularism. It might seem that Charlie Hebdo’s cartoonists were fixated on Islamic extremism, but rather, it was because the cartoonists had found the ideal target: one that can't take a joke. While the attackers achieved their immediate, “stupid and vicious” goal of bringing jihad to Paris, their action was counter-effective in every other way. They turned their victims into martyrs and even their most idiotic cartoons into icons of free expression. Moreover, they showed that their distorted understanding of Islam must be fragile indeed if it can be so threatened by ridicule. Their actions did not silence the weekly. Charlie Hebdo published a new edition on schedule the next week after the attack with a print run of one million copies, many times their usual 60,000.