Although it's not exactly common today, neither is transgender a particularly controversial or taboo topic of discussion. There's even a medical name for the underlying condition, Klinefelter Syndrome, where a male has XXY sex chromosome karyotype (the number and visual appearance of the chromosomes in the cell nuclei of an organism). However, during the early years of the 20th century the condition was unknown and the cure (of sorts) was known as Sex Reassignment Surgery (SRS). It, too, was practically unknown and certainly not the topic of polite conversation except perhaps in the rarified company of French Bohemia making up the social milieu of Paris during the 1920s. Gerda Wegener was a woman, probably a lesbian. Her husband, Einar Wegener, was a man who became a woman (or tried to). Both were artists, both were homosexual, both they and their art enjoyed a degree of popular notoriety during the 1920s and 30s. Together, to this day, they constitute one of the strangest artists' relationships ever recorded.
﻿ 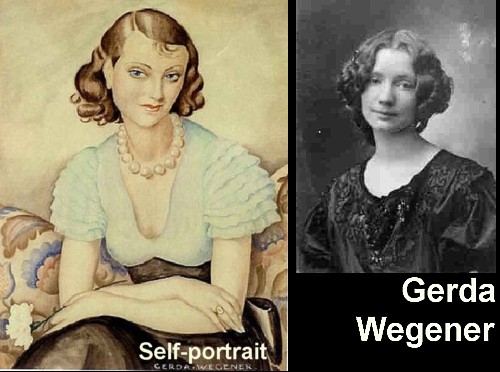 Gerda Gottlieb first met Einar Wegener sometime around 1900 when both were stu-dents at the Royal Danish Academy of Fine Arts in Cop-enhagen. They were married in 1904. She was eighteen; he was twenty-two. Gerda's big break as an artist came just after graduating from the Academy in 1907 when she won a drawing contest spon-sored by a major Copenhagen newspaper. Gerda was in-spired by fashion design, working as an illustrator for Vogue, La Vie Parisienne, and other magazines. She had become a well-known artist in Paris where she was more successful than in Denmark. There people found her work too controversial. She held exhibitions at popular art galleries around Europe, culminating, in 1925, when her art won a prize for at the 1925 World Fair in Paris. She was known for her advertising illustrations while also being sought-after as a portrait painter. She befriended Ulla Poulsen, a famous Danish ballerina (above), who became a frequent model for her paintings.

After they were married, Gerda and Einar Wegener traveled throughout Italy and France. They eventually settling in Paris in 1912. The couple immersed themselves in the Bohemian lifestyle of the time, befriending many artists, dancers and other figures from the art world. At the time, many considered Einar to be the more talented artist, so he toned down his own work to help his wife's career. Then one day, when one of Gerda's models failed to show up, Gerda persuaded her husband to wear stockings and heels so his legs could substitute for those of the model. He found women's clothes to be surprisingly comfortable. Soon thereafter Einar Wegener took on the name and persona of "Lili Elbe." Lili became Gerda's favorite model. Over time, Gerda became famous for her paintings of beautiful women dressed in chic fashions. However, in 1913 their secret got out. The art world was shocked when they learned that the model who had inspired Gerda's petite femmes fatales (below) was, in fact, her husband. 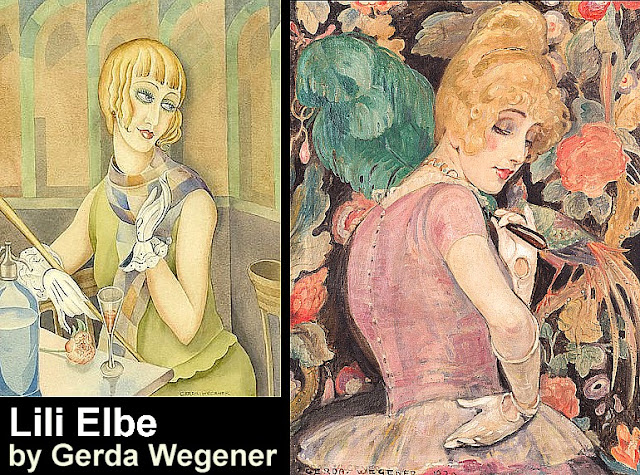 Einar eventually identified as a male-to-female transgender woman. In 1930, he/she had the first publicly known SRS in history. When out in public, Gerda introduced Elbe as Einar Wegener's sister. The whole scandalous outrage came to a climax in October of 1930 when Denmark's King Christian X, declared the Wegeners' marriage null and void. Lili died the following year from complications resulting from what was to be her fourth and final sex change surgery. Her body rejected the implanted uterus and surgically constructed vaginal canal. Hormonal tests taken just before her first surgery indicated more female than male hormones (in the days before hormonal therapy). Some reports indicate that Elbe also had rudimentary ovaries in her abdomen.

Devastated by her husband's death, Gerda married an Italian officer, aviator, and diplomat, Major Fernando Porta, who was ten years younger than she. They moved to Morocco where Gerda continued to paint, signing her work as "Gerda Wegener Porta." The marriage was rocky. She divorced Porta in 1936 after he swindling her out of a substantial sum of money. She returned to Denmark in 1938 where she held her final exhibition a year later. By this time however, her work was out of style. Having no children Gerda lived alone in relative obscurity, drink heavily, her only income that of selling hand-painted postcards. She died in 1940, just months before the Nazi's invaded Denmark.