I've long claimed, and history has long ago proved, that art and war don't mix. Artists flee the death, destruction, and uproar of war like the plague, and very often take their art with them. We saw this happen during both world wars. The wars changed the artists and their art most profoundly. That was especially the case shortly before the Second World War when Europe's loss of great artists was America's gain. The center of gravity in the art world moved across the Atlantic to New York where it has mostly stayed in the seventy years since the war's end. Of all the major artists in France, only Pablo Picasso remained in Paris for the duration, while virtually all other fled either west or hid in the South of France. Now, having once more made a case for art and war being antithetical let me counter that in saying the one type of art actually thrives on warfare. In its reaction to the brutality of war, photography is not beautiful in the sense we think of the art beauty of painting, for example. However if we think in terms of an art that conveys the most profound truths regarding the human condition under stress, followed by the joy and relief when war ends, then no art except photography (and moviemaking) comes even close in its creative power to move men's minds as does the artist risking his life to capture its worst moments. Picasso could paint a thousand Guernicas without conveying the horror and accompanying emotional impact of a single photo by the Hungarian photographer, Robert Capa.

That single photo came in 1936 as Robert Capa worked in Spain, photographing the Spanish Civil War, along with Gerda Taro, his companion, and David Seymour, his professional photography partner. In 1936, Capa became known around the world for the "Falling Soldier" photo (top) long thought to have been taken in Cerro Muriano on the Cordoba Front of a Marxist militiaman, who had just been shot to death. It has long been considered an iconic image of the war. In more recent years scholars have come to question the authenticity of the photograph as to its location, and the identity of its subject. Be that as it may, Capa's image is no less compelling as an anti-war statement quite apart from any questionable details. Capa was, of course, simply lucky, having been in the right place at the right time, his itchy trigger finger tripping the shutter at precisely the moment when the "luck" of his subject suddenly exploded within him. However luck had nothing to do with Capa's equally stirring Leipzig Suicide (above) in which he was one of three press photographers called in to document the cyanide suicide of Leipzig's Deputy Mayor and Municipal Treasurer, Dr. jur. Ernst Kurt Lisso (at his desk), and his wife, Renate, on the couch, next to their nineteen-year-old daughter, Regina. The place was the city's town hall as the family sought to avoid capture by American soldiers closing in on the city. Being an artist during a war takes a strong stomach.

Robert Capa was born Endre Friedmann to the Jewish family of Júlia and Dezső Friedmann in Budapest, Austria-Hungary in 1913. His mother, was a native of what is now Slovakia. Capa's father came from the Transylvanian (now Romania). When he turned eighteen, their son decided there was no future for him under the Hungarian regime following World War I, so he left home for Berlin. Capa originally wanted to be a writer. However, when he found work in photography, he grew to love the art. With the rise of Nazism in Germany, Capa fled to France in 1933 to avoid persecution as a Jewish journalist and photographer. However, he found it difficult to find work so he decided to change his Jewish name, adopted the name, "Robert Capa." Cápa (shark) had been his nickname in school. He felt that it would be recognizable and American-sounding, since it was similar to that of film director Frank Capra. He found it easier to sell his photos under the newly adopted "American" name. Over a period of time, with the help of his girlfriend Gerda Taro, Capa gradually assumed his new persona while Gerda acted as an intermediary with those who purchased the photos taken by the "great American photographer, Robert Capa." Capa's first published photograph was of the Communist leader, Leon Trotsky, making a speech in Copenhagen in 1932.

As World War II, began, Capa had moved from Paris to New York City, both in looking for work, and to once more escape Nazi persecution. During the war, Capa was sent to various parts of the European Theater areas on photography assignments. He first worked for Collier's Weekly, but was fired as an "enemy alien" photographer. He switched to Lifefor whom he was to work intermittently for the rest of his life. During July and August, 1943, Capa was in Sicily with American troops, near Sperlinga, Nicosia and Troina. By October of that year he was in Naples where he photographed the Naples post office bombing.

However, Capa's greatest challenge and triumph came on D-Day, June 6, 1944, as he landed with the men of the 16th Infantry Regiment as part of the second wave of troops hitting Omaha Beach on the Normandy coast. Capa used two cameras mounted with 50 mm lenses and several rolls of spare film. He took 106 pictures in the first two hours of the invasion. Unfortunately, when Capa returned the unprocessed film to London, a fifteen-year-old darkroom assistant at Life accidentally set the dryer too high and melted the emulsion of three complete rolls and over half of a fourth roll. Only eleven frames were recovered. Capa never mentioned the loss of three and a half rolls of his D-Day landing film to the boy's supervisor. However, those eleven shots that remained became known as Capa's Magnificent Eleven. They depicted the landing and heavy resistance from German troops in their bunkers along the Atlantic Wall with such forceful power as to visually rival his earlier photo of the dying militiaman. Decades later, another great photography artist, Steven Spielberg, is said to have been inspired by these images in filming Saving Private Ryan.

Although it may seem like it sometimes, wars do not go on forever. They do end. Otherwise, we might not know when the next one begins. What do photojournalists do between wars? Well, in Capa's case, they photograph painters, particularly Pablo Picasso (above) and Henri Matisse (right). Matisse was still at work when Capa photographed him in 1950 at the age of eighty-one. Matisse died four years later in 1954. Even war photographers thrive on beauty, as seen in Capa's image of Hollywood actress, Ava Gardener (below), whom depicted in color during the making of The Barefoot Contessa in Rome in 1954. Later that year, while on another assign-ment from Life magazine covering yet another war (the French misadventure in Indochina), Robert Capa became a victim of the war he was bringing home to American readers when he was killed, having stepped on a landmine. He was forty-one. ﻿
﻿ 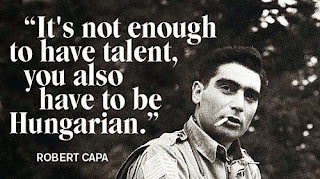