Almost a year ago, as I was doing a piece on 21st-century architecture, I stumbled upon the work of an architect I'd not heard of before, Zaha Hadid. What caught my eye was her 2022 World Cup Ai Wakrah Stadium in Qatar (click above). Not only had I not heard of the Iraqi-British architect before, I also wasn't aware that she was a woman, or one so celebrated in the architectural world. In 2004 she became the first woman recipient of the Pritzker Architecture Prize, which is sort of like the Nobel Prize for architecture. Also, she received the Stirling Prize awarded by the Royal Institute of British Architects in 2010 and 2011. As I've researched her body of work, I've gained a great deal of respect for this sixty-five-year-old female presence in what may be one of the last major bastions of male dominance in any major area of the arts.
﻿ 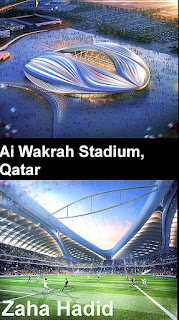 Zaha Hadid was born in 1950. She grew up in one of Baghdad's first Bauhaus-inspired buildings during an era in which modernism was associated with glamour and progressive thinking in the Middle East. She studied mathematics at the American University of Beirut before moving on to study at the Architectural Association School of Architecture in London. After college, she worked for the Office for Metropolitan Architecture, in Rotter-dam, where she became a partner in 1977. In 1980, she established her own London-based practice. During the 1980s, she taught at the Architectural Association. Zaha has also taught at the Harvard Graduate School of Design, and at the University of Illinois at Chicago's School of Architecture. Since 2000 Hadid has been a guest professor at The University of Applied Arts – Vienna. In the U.S., Hadid was named an honorary member of the American Academy of Arts and Letters and an honorary fellow of the American Institute of Architects.

Altogether, Zaha Hadid has to her credit some thirty-three completed projects with another eleven now under construction in various parts of the world, so obviously I can't show here a even decent representative sample of her work. Instead, I've pulled together a few of her more outstanding pieces that have caught my eye in much the same was as the Ai Wakrah Stadium (above, left) did almost a year ago. Personally, the most exciting of these is the Abu Dhabi Performing Arts Center (above). The complex houses five theaters, a music hall, a concert Hall, and an opera house--conceived as a sculptural form--a growing organism that spreads through successive branches much like "fruits on the vine." Built to an enormous scale, the structure has a windswept, fluid quality unlike the work of any architect working today.

The same is true, though with a more angular quality, in viewing her Pierres Vives Building, Montpelier, France (above). With it's massive, though irregular horizontal masses juxtaposed with delicate, louvered details, the effect is, again, highly sculptural. Occupied by the department of d’lherault, the overall structure is characterized by the unification of three key institutions–the archive, the library and the sports department – all housed within a single envelope. From a distance, the architectural facade has a strong, physical presence, but as one approaches the site, the physical divisions of the space become more apparent.

The Guangzhou Opera House features as freestanding concrete auditorium set within an exposed granite and glass-clad steel frame. The complex took over five years and $200-million to build. It has been praised by architectural critic, Jonathan Glancey, as: "...at once highly theatrical and insistently subtle." In April 2002 an international architectural competition attracted several internationally known architects, each producing detailed designs. In November 2002, Zaha Hadid's "double pebble" was announced the winner. Ground was broken in early in 2005 with completion in 2010. The theatre has become the biggest performing center in southern China and is one of the three largest theaters in China.

﻿
Being an artist, I would have to say my favorite Hadid project was her Eli and Edythe Broad Art Museum (above) on the campus of Michigan State University in East Lansing, Michigan. The building features a striking façade of pleated stainless steel and glass, which stridently distinguishes it from MSU’s traditional Collegiate Gothic north campus. The museum presents contemporary art within a historical context through its study collection of more than 7,500 objects, covering the Greek and Roman periods up through to modern art. The 46,000-square-foot building also features galleries for special exhibitions as well as an educational facility, a works on paper study center, administration offices, a café, and gift shop, as well as a pedestrian plaza and sculpture garden.

Simply as a sort of footnote to the Zaha Hadid works I've discussed in some detail, I'd also like to include some of her other buildings that have also struck me as ahead of their time, such as the Heydar Aliyev Cultural Centre (above) in Baku, Azerbaijan and the Office Center Dominion Tower (below), in Moscow. Hadid's Galaxy Soho (bottom) is a huge office complex in Soho, China (bottom)