What happens when the same artist wins the top prize in a national art competition seven out of eleven consecutive years? Calls for reform? Boycotts? Blaring newspaper headlines? Endless derogatory comments from art critics and the public alike? Riots in the streets? All hell breaks loose? Yeah, pretty much...more or less. That was the case in 1952 when the news broke that the Australian portrait artist, Sir William Dargie had taken home top honors (again) in the Archibald Prize competition sponsored annually by the Art Gallery of New South Wales in Sydney, Australia. One newspaper reported: "Apropos of records, enter Bill Dargie in 1952 for a seventh win with a portrait of Essington Lewis. A mini-riot ensued. For young and emerging artists, restless for the new, the Dargie near-monopoly was becoming a scandal." Another writer added, "The win prompted an art students' demonstration. The students [about 40], most of whom refused to give their names, marched around the gallery, were photographed in front of Dargie's portrait, gave three cheers for Picasso...then left."
Okay, it wasn't quite a riot, more of a tussle. It wasn't the money. The prize of 539 British pounds sterling amounted to about $2,470. It wasn't the artist. By that time William A. Dargie was probably the best, and certainly the best-paid, portrait artist, not just in Australia, but in all the British Empire (above). He was also something of an artist/war hero (top). It wasn't the portrait itself that was such an outrage, though it was a rather traditional, stodgy-looking, fat, old man named Essington Lewis. He had made his fortune during the war manufacturing and selling arms of all types, shapes, and sizes, from hand guns to tanks and torpedoes. No, it was the Gallery and the Board of Trustees which came to feel the brunt of the art world's protest. A headline screamed: "'Don't Hang Dargie--Hang the Trustees!"
William Dargie was born in 1912 in Footscray, Victoria (now a neighborhood in Melbourne), the eldest son of Andrew and Adelaide Dargie. The young artist picked up art training wherever he could find it, mostly from individuals and small technical schools in the Melbourne area. When the war came, he enlisted only to be dragged from the tranches and made a "war artist." His 23rd Battalion at El Alamein (top) dates from 1942. In fact, it's said Dargie got word that he'd won his first Archibald Prize in 1941 while digging ditches in North Africa. His wife had entered a portrait he'd done before the war of Sir James Elder, a Director of the National Bank of Australia. (The Archibald competition is limited to portraits of famous Australians by Australian artists.)
Following his 1941 win, during and after the war, William Dargie went on to win the Archibald Prize in 1942, 1945, 1946, 1947, 1950, 1952, and 1956. By 1956, the reaction was not so much outrage but boredom--ho hum, Dargie won again. What else is new? His portrait of fellow artist Albert Namatjira (above) Dargie considered his best, though like virtually all of his earlier winning entries, he was beset by criticism that his work was empty, tired, and outdated.
Dargie's greatest critical success came in 1954 when the newly crown Queen Elizabeth II made a state visit to Australia. The young queen was so enamored with Dargie's official portrait, commissioned by the wealthy industrialist, James P. Beveridge, she ordered a personal copy of her own. Dargie had become concerned that the official portrait might be damaged or lost during transit to and from Australia. He commenced work on a copy, to be shipped separately, in the hope that at least one version would arrive safely. This "spare" was painted upside down at the London home of his hosts, the Hamilton Fairley family. Dargie employed this seemingly odd move in an attempt to view the portrait as a series of colors and forms thus eliminating the natural desire to improve on the original. Doing so prevented embellishment and created a truly identical copy. The painted provenance, and the circumstances of the replica’s creation, are attested to by the artist with the inscription on the reverse, which reads: 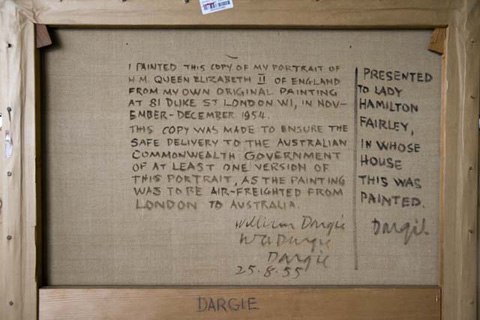