It would come as no surprise to anyone that male artists love to paint women. It would be safe to say that those of the feminine gender have been the single most common content area for all artists, men or women. Except for a few dedicated landscape painters and the non-representational artists of the 20th century, virtually all painters have painted more women during their lifetimes than men, or likely any other subject for that matter. Although there has been no shortage of female nudes down through the centuries, most of painters (and probably their models) preferred their female figures clothed. Seldom, however, has an artist painted women, clothed or otherwise, with such dogged consistency than the Dutch-born, but mostly French artist, Kees van Dongen.
I've neither the time nor inclination to take a survey of van Dongen's work, but judging from what I've see, I'd say roughly 95% of the man's paintings were of women, and about half of those were nude. Moreover, taking into account all his female figures, the vast majority, were what we'd term at least "mildly erotic." He must have been quite popular among the ladies, or perhaps merely quite persuasive, in that most of his nude figures have names known to us today meaning they were mostly friends and acquaintances.


One of van Dongen's favorite models was his wife, Augusta Preitinger, also an artist whom he had met while they were studying at the Royal Academy of Fine Arts in Rotterdam. They married in 1901 shortly after van Dongen moved to Paris. Although initially living aboard a laundry barge on the Seine, Van Dongen gained celebrity through the outraged reaction to his large nude of his wife, Tableau, painted in 1913, and now in the Centre Georges Pompidou (above-left). This picture, shown at the Salon d'Automne the same year that it was painted, was considered so salacious and licentious that the police removed it. Several years later van Dongen painted a similar nude self-portrait (above-right). Art history does not record what the police thought of it. 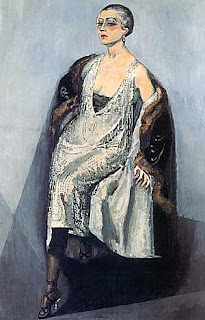 ﻿
Although I've not mentioned it yet, if you know anything at all about painting styles from around the turn of the century, you'll recognize that Kees van Dongen was a Fauvist (wild beast). His palette was wild and beastly. Stylistically, he ranged all over the place from German Expressionism ala Die Brucke (the bridge) to what has come to be know as the "Paris School," which is probably more accurate. While associated with Fauvism early in his career, Van Dongen introduced a range of edgy urban subjects that went further in challenging social norms than Derain, Vlaminck, Matisse, or any of the others, who stuck to traditional bourgeois themes (still-life, landscape, portraits, and interiors). Van Dongen was born in 1877 and died in 1968 at the age of ninety-one, so he was both witness to, and a participant in, a very broad span of painting styles and history. Kees van Dongen has never received the critical acclaim afforded other Fauves. Whether or not he deserves it is still an open question. But what is certain is that modern art today would not be the same without him.