July has only one major holiday, but some thirty minor ones, namely the rest of the days of the month. Although we usually think of August as being "vacation month," surveys tell us that far more people (taking vacations) do so in July (45%) than the following month (only 35%). One week seems to be the preferred duration (23%) with about half of all vacationers leaving their home state. Florida, and then California lead the list of favorite vacation destinations. For those leaving the U.S., the Bahamas and the U.K. lead the list. And the most favored activity seems to be relaxing away from home with the family. Perhaps the most interesting aspect of all this is the fact that none these vacation statistics correlate in any way with July's one major American holiday, our Independence Day, better know as the Fourth of July.

It's been quite some time since most Americans have viewed the Fourth of July as the sedate, even sacred commemoration pictured by John Lewis Krimmel in his Fourth of July in Center Square in 1812 in Philadelphia (below), painted, oddly enough, in 1812. It looks more like Sunday morning after church services. I'm curious as to the smoke emanating from the dome in the background. That must be where they hold the barbecue.

Today, our image of the Fourth of July is more in line with a picnic bill of fare--hamburgers, chips, corn-on-the-cob, and watermelon (below). Thom-as Jefferson would probably have approved, but I'm not so sure about George and Martha of Mount Vernon. The American impressionist, Childe Hassam gives us a glimpse (below) of what the Fourth of July was like 101 years ago.

Folk Artist, Sharon Esther Ascherl (below), provides a rural version of the Fourth of July to juxtapose next to Hassam's red, white, and blue Fifth Avenue extrav-aganza. The painting she titles 4th of July Sunday School Picnic. Wish I could make out the food spread on the tables a little better. 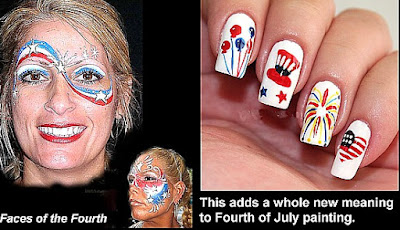