Inasmuch as I try to stay six weeks ahead of my publication date, I suddenly realized yesterday that I'd not completed my most recent series on seasonal art. I'd not done anything on summer art. At the rate I was going summer could be be over before I'd adequately covered the subject. Then I once more came face to face with the fact that, unlike my series of monthly paintings when I relied on holidays and history to flesh out my selection of outstanding works, that approach would be impractical. With seasonal art there were just too many holidays involved, too much history, and way too many excellent artists. So, I had to refine my selection to works highlighting much more generic creative efforts--art that almost screams summer.

There's something about the warm (sometimes hot ) summer days that brings artists of all caliber out of their studios (unless they're addicted to air conditioning). Summer days also invite far to many artists, all creating outstanding works for me to even begin to claim much in the way of evaluation. That's not to say I don't have several broad standards by which to legitimize my choices. Moreover, many of these criteria cut neatly across virtually all art genre, media, style, techniques, and content. I've listed some them below:

Originality--Does the artist bring a new understanding or approach to his or her undertaking? Or, is it imitative, tired, and trite? Compare Abel Grimmer's Summer to Bruegel's handling of the same subject a generation earlier (below).

Technical Proficiency--Is the artist sufficiently skilled in his chosen media to successfully render his or her work? Does an awkward, uncertain, poorly drawn image detract from the overall impact of the work?
﻿
Appropriate Style--Is the artist's subject appropriate to his or her style? It's quite difficult for an artists to vary their style to accommodate a certain subject, especially when it's as deeply ingrained as was that of Edward Hopper (above). Choosing a mood or activity lending itself to an established style as Hopper did, is not just easier, but inevitably results in a superior work of art. You can almost feel the oppressive humidity lingering from a hot summer day, which Hopper suggests with his Summer Evening. In contrast, Richard Bergh's Nordic Summer Evening (below) from around 1900 presents nearly the same content, but imparts a feeling of refreshing coolness.

Unambiguous--Does the work leave the viewer with a clear understanding of the message the artist seeks to convey? Or, as with Stephan Darbishire's Wild Flowers and Summer Wine (below), is the artist attempting to have it both ways, combining two largely incompatible genres (landscape and still-life) in the same work.

Clarity of Vision--Is there a single visual image as with Albert Bierstadt's Merced River, Yosemite Valley (upper image, below)? Or, is the artist torn between two opposite environments as seen in Jeremy Wimborg's Timpanogos Tipis (lower image, below). The painting has much going for it, but visual unity is not among them. 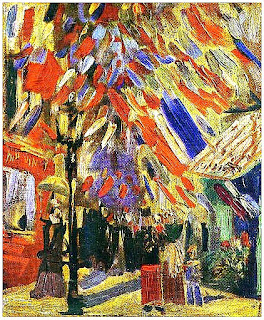 Emotional Impact--Does the work of art reach out and touch the viewer, arousing feelings, whether calm and peaceful (as with Monet's Vetheuil in Summer (below), dating from the summer of 1880? Or quite the opposite, as with van Gogh's Fourteenth of July Celebration in Paris, does it excite the spirit with the wildly rau-cous uproar of color he associates with France's Bastille Day (similar to the U.S. Fourth of July)?


Each artist and each work seeks to capture both the essence and the details of the summer season. Some do so better than others. Their visions and summertime memories span several centuries while embracing different cultures and their attempts to cope with and enjoy this warmest (or hottest) season of the year. Below is my own effort in this regard. I call it Treed. Let's just hope the boy is not startled into a rude awakening.