In recent months I've taken to highlighting some of the smaller, yet outstanding, museums this country has to offer. Most of them deal with art in general with perhaps a bias toward a particular type, or era. Some deal only with American art, others only with wildlife or that of the American West, while others concentrate on the wild, wild east. Only one such museum in this series deals with the art of just one man--the iconic, all-American painter, Norman Rockwell. As these smaller museums go, the Rockwell is medium in size with between five and eight hundred original works (depending on who you ask), and is the largest, most complete collection of the artist's work to be found anywhere. It's also Stockbridge, (western) Massachusetts' only major tourist attraction.
I'm not going to expound to any great degree on the art of Norman Rockwell. God knows I've done that in the past, many times over. This is about the museum--the big white box (below) that holds and protects it all. The museum was founded in 1969 by the artist and his third wife, Molly. It was then "refounded" by the Rockwell heirs fifteen years after the artist's death on a 38-acre site just over two miles outside of Stockbridge. In addition to hundreds of original works by Rockwell, the museum also houses the Norman Rockwell Archives, a collection of over 100,000 various items, including photographs, fan mail, and business documents. In 2014 the Famous Artists School donated to the museum its archives, including numerous drawings from 1948 by Rockwell, who was one of its founding faculty members.

﻿
To me, these miscellaneous items, photos, and drawings having to do with the man, his three wives, his three sons, and the source material (photos, below) he had created are far more interesting than his paintings, most of which I've seen dozens of times before. I wish I could say I've seen them in the Rockwell Museum setting, but alas, I haven't gotten that far down my "bucket list" yet. Photos such as the ones below with two of his three sons add an extra dimension to the artist as a father, with which few people are familiar.

As a painter myself, nothing delights me more than getting a peek at that which an artist used as reference material. Rockwell was rare for his time in using the services of a professional photographer in posing his models, especially the youthful ones, especially the rambunctious pre-teen boys which so often appeared in his Saturday Evening Post cover art. Rockwell worked for the Post for some forty-two years before switching over to that magazine's upstart rival, Look, during the final ten years of his career. Working for Look, Rockwell took on much more contemporary, often controversial, content such as New Kids in the Neighborhood (below), here accompanied by his source photos. It's especially interesting to observe where he closely followed the photos and when he departed from them, and trying to discern why he may have done so.
﻿
The Rockwell Museum is also a good place to come to terms with the evolution of its namesake as to style. Looking closely it's not hard to see three distinct periods in Rockwell's stylistic development. From around 1916, when Curtis Publishing first put Mother's Day Off, on the cover of their flagship magazine, until 1943 when Rockwell painted his famous Four Freedoms (and coincidentally, his studio burned to the ground destroying many paintings and all his old props), we might call his style "Early Post." From that point until 1963 when he painted his last Post cover, we might call it his "mature" period. And finally, during his ten years with Look, he found a new, fresh, much more contemporary, photographic style--"The Look look." The museum covers all these stylistic elements in depth.

In moving and reconstructing Rockwell's studio (top) during the last 25 years of his career, the museum has relied upon the visual documentation provided by an overzealous Post photographer sent to cover a "day in the life of an artist." The man not only shot copious photos of the artist at work, but damned near everything else as well. His employer was not amused by what they saw as a waste of valuable film, but the Rockwell Museum curators have come to bless him to no end. He made their work easy as well as authentic down to the smallest detail.

During Rockwell's years with the Saturday Evening Post, he painted 321 covers. Naturally, not all of these works are represented on the walls of the museum as full-size originals; but even in magazine cover format, they make for quite an impressive display. At one point, a rival periodical offered Rockwell a thousand dollars a week (twice what he was making from the Post.) Rockwell turned them down. So impressed was the Post by the artist's loyalty, they doubled his salary. Rockwell painted sporadically up until early 1978 just six months before he died of emphysema. Ironically, Rockwell's trademark pipe was likely the direct cause of his death.

Click below for a quick tour of the museum. 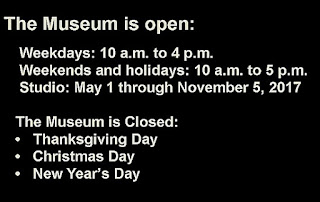 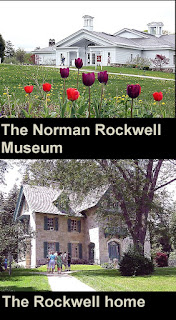