﻿
Let me begin by setting the record straight. I don't do mind-altering drugs, I never have, and except perhaps on my death bed, I never will. I don't smoke--tobacco or any other grassy substance. I don't consume alcohol except for rare, European excursion with lunch. I've never even tasted beer. I have never been inebriated (drunk). Moreover, except for cigarette smokers, I don't hold an opinion one way or another regarding those who pursue any of these pleasures. My own addiction has to do with food, which I fear would probably translate to a similar dependency with regard to these other substances if I were to indulge myself. 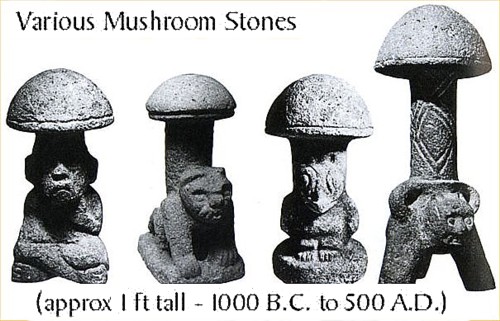 Psychedelic art, many probably suppose, has its roods deep in the countercultural movements of the 1960s and 1970s. Actually, that era merely saw the sprouting of buds, branches, and limbs, as it were, when associated with marijuana, LSD, cocaine, and other such substances. Actually, the so-called "drug culture" literally mushroomed from a mushroom--the Psilocybin mushroom, to be exact. And that little booger has impacted the human consciousness dating back at least six-thousand years to primitive Aztec religious ceremonies. Insofar as art is concerned, carved Mushroom stones and motifs have been found in Guatemala dating from as far back as 1000 BC. They depict a mushroom strongly resembling Psilocybe Mexicana found in a west Mexican tomb in the state of Colima. The Psilocybe species was known to the Aztecs as Teonanácatl (literally "divine mushroom"). Thus there's nothing new about psychedelic drugs or the art they've fostered.
Most of the art associated with mind-altering drugs tends to be about them rather than art created using such substan-ces. For the most part, art about drug use breaks down into two categories, that which glorifies it and that designed to frighten potential users. I won't comment on either type ex-cept to say they are both valid forms of art and the former, naturally, is usually much more attractive. In our modern era, both types have their origin in the opium dens of China. So powerful was the attraction for this drug it came to pervaded all levels of that country's social classes (left). Its economic impact was so huge the British even went to war twice to gain a piece of the action (1839–42 and 1856–60). They won the wars but ended up with Chinese opium dens in London (above).

The quintessential Psychedelic artist of the 1960s and 70s was (and is) Peter Max. His work has become an indispensable guide for cultural literacy of the 1960s. Today his paintings command a large following (and large prices) in becoming consistently collected worldwide. There were, however, precursors such as Salvador Dali as far back as the 1930s with his The Persistence of Memory (below) which may reference the seeming "slowing of time" reported by many drug users. Was Salvador Dali simply painting an encounter with the wrong kind of mushrooms served at dinner? Quite apart from his state of mind, what I find remarkable about this painting is that the public has so embraced its clash of two different worlds, the real and the imaginative (surreal).

﻿
Before Peter Max took up Psychedelia, San Francisco graphic designer, Wes Wilson designed some of the first and most well-known psychedelic posters. Among his best were for Bill Graham (not Billy Graham) of The Fillmore in San Francisco, in which he invented a style (below) that is now synonymous with the peace movement, psychedelic era, and the 1960s. In particular, he is known for inventing and popularizing a psychedelic font around 1966 that made the letters look like they were moving or melting.

Op Art, short for Optical art, is a style of abstraction that relies on geometric shapes, lines, and color juxtapositions to create optical illusions for the viewer. Gaining popularity in the 1960s, such art had little to do with the drug culture of the time but everything to do with a similar interaction between the brain and the eyes, without the influence of drugs, but having many of the same effects. It often featured patterns, grids, and curving or diminishing objects. In form, it had a tremendous influences upon psychedelic art. The Op art movement was driven by artists such of Victor Vasarely and Bridget Riley (below).


Abstract Expressionism and the New York School of the 1950s had loosened the bounds of what could legitimately be called art. Psychedelic art feasted upon that broadened definition. But such art also choked on the same problem that had earlier bedeviled Abstract Expressionism. It was so new and there was so much of it being churned out by artists ranging from zombie drug addicts to entrepreneurial masters such as Peter Max, that no one, even most critics, could differentiate between what was "good" Psychedelia and what was simply a bad acid trip splattered on canvas (below).