C is for Creativity 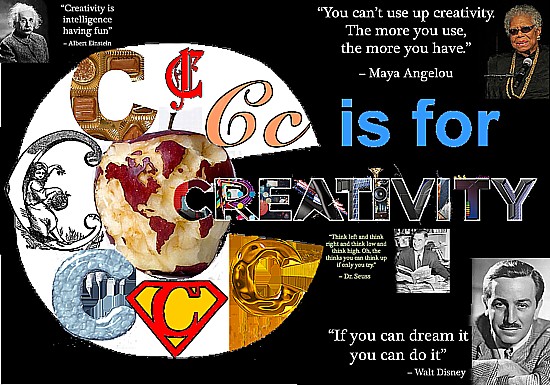 If anyone knows about creativity, it's an art teacher (or former art teacher in my case). Creativity is the one consistent thread running through all art classroom activity. Yet, having said that, I have long held the opinion that, except for extreme, highly controlled, often experimental efforts, creativity cannot be taught. It can, however, be learned. Are those two statements in conflict? Teaching is an adult activity. Learning is a student (usually a childhood) activity, whether learning to draw a "stick man" or mastering the intricacies of two or three-point linear perspective. Efforts at teaching do not necessarily equate to learning, especially in an area as ephemeral as creativity.

You've no doubt heard it said that children are naturally creative. With a few "rule-proving" exceptions, that's fundamentally true. But while a child can seldom be taught to be creative, they most certainly can be taught to be uncreative. In fact, over the course of twelve or more years of schooling, that's the most likely outcome. For most, creativity has been buried by rules and regulations. Our educational system was designed during the Industrial Revolution over 200 years ago, in order to train workers to follow instructions. Along the way, someone decided if workers were to be trained to work in factories, they should, therefore, be educated in factories. I know as a teacher, I often felt like I was working on a factory assembly line. I'm likewise sure my students, at times, felt "manufactured." Little has changed as to that way of thinking even though more and more factory work is being done by machines, programmed by the few-and-far-between creative adults not robbed of their creativity at some point in their educational careers. This accounts for the fact that education reform is about as likely as tax reform or the repeal of Obamacare. In essence, the reformers have the most to lose by reforming.

Decades ago when I was undergoing teacher training, the fear among university pedagogues was in "stifling" creativity. The feeling was that if you could teach creativity you could just as easily stifle it. After a few years I came to the conclusion that the whole premise was in error. I began to realize that creativity was not a fragile thing. Yet, while every art instructor tries to foster creativity, as the child develops, there ensues a race between those things in life which discourage creativity and any effort on the part of a teacher to do the opposite. In general, the teacher loses the race, and in the long run, so does the student. Creativity will fade due to social pressures, but it's highly unlikely an art teacher would stifle creativity, even by accident. I've had several instances where I was a student's only art teacher for the full twelve years of their public education. I've seen students go from highly creative in first grade to somewhat creative in fifth grade to desperately fearful of innovation of any kind by graduation. In large part, this "fear of the future" was responsible for Donald Trump becoming president. Why else would the lower-middle-class vote against their own self-interest?


Those having bright ideas but not acting on them, may be imaginative, but they are not creative. Left-brain linear, analytical, computer-like thinking is being replaced by right-brain empathy, inventiveness, and the understanding of complexities, are the skills most needed by business. They're also the skills most lacking in older workers. Creativity gives people a competitive advantage by adding value to their service or product, thereby differentiating them from their competition (as workers or businessmen and women). Without creativity. workers are doomed to compete in commodity hell! 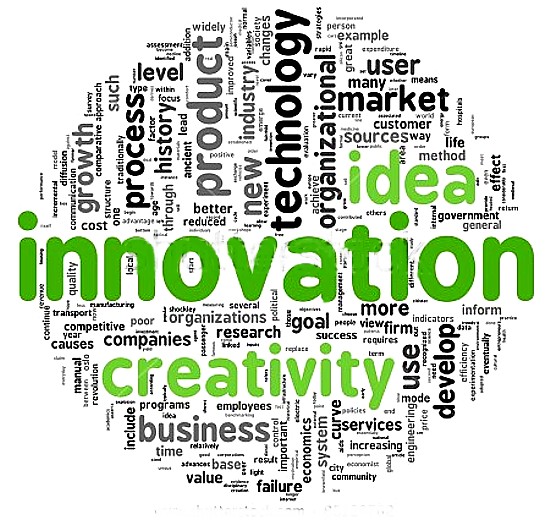 Creativity begins with a foundation of knowledge, learning a discipline, and mastering a way of thinking. One must know the rules in order to know when, where, how, and whether to break them. Creativity involves experimenting, exploring, questioning assumptions, using imagination, and synthesizing information. Learning to be creative is akin to learning a sport (minus the subservience to rules). It requires practice to develop the right muscles, and a supportive environment in which to flourish.

3. Observing: scrutinizing the behavior of others to identify new ways of doing things.

Beliefs that only special, talented people are creative (and have been born that way) diminish our confidence in our creative abilities. The notion that geniuses such as Shakespeare, Picasso, and Mozart were `gifted’ is a myth. In a study at Exeter University, researchers examined outstanding achievements in the arts, mathematics and sports, to find out if the widespread belief that in reaching high levels of ability, a person had to possess an innate potential called talent. Few historic artists showed early signs of promise prior to parental encouragement. Not one reached high levels of achievement in their field without devoting thousands of hours of serious training. Mozart trained for 16 years before he produced an acknowledged masterwork.