Virtually every country on earth has its strengths and weaknesses in art. I can say this categorically because there seems to be no correlation between a nation's art and the size of that country, the length of its art history, nor its geography. Two factors that do, however, have a profound effect upon a country's art have to do with its economy, and the political stability of its government. Recently I wrote on a small country tucked away in a mountainous nook and cranny of Europe with a long, impressive reputation of providing the world with an immense quantity and quality of art and artists--Switzerland. In Asia, Japan is much the same. And though we don't often consider South America as a hotbed of artistic achievement, the nation of Ecuador has a lot in common with the Swiss in all these respects.
Each of the countries (and others) which, though small and rather insignificant in many respects, have also fostered a long list of outstanding (if not always famous) artists. In the case of Ecuador, I've written on only one, Gonzalo Endara Crow, but should have written (and probably will, eventually) on several others such as Diógenes Paredes, Bolívar Mena Franco, Pedro León, Eduardo Kingman, Oswaldo Guayasamin, Araceli Gilbert, Enrique Tábara, Humberto Moré, Juan Villafuerte, Luis Miranda, and a few more. Inevitably some of these are better, and thus more important, than others. In fact, other than their Ecuadoran nationality, these artists have little in common except for the fact that they have painted the face of their nation by painting the faces of its people. 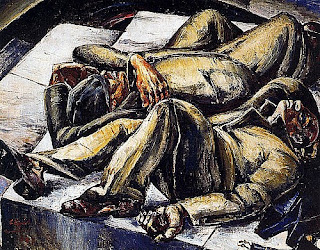 This type of art is called Indigenist, and the main driving force in this area of art, and a constant reference for such work across Latin America, is the Ecuadoran artist, Camilo Egas. Indigenist Movement sought to emphasize the relationship between the nation state and Indigenous minorities. Before the Indigenist Movement, the mainstream type of painting in Ecuador was Costumbrista, which is basically European genre Realism applied to local daily life. Having studied in Madrid and Paris, Egas knew Costumbrista well. Upon returning to Ecuador in 1926, he founded Ecuador’s first art periodical journal, Hélice (Helix) as a means of promoting Modern Art and more specifically, Indigenist art.

The Indian (Native-Ecuadoran) theme seen in Egas' his work was related to the rise of Socialism and the founding of Marxist parties in Latin America. Egas combined the Costumbrista painting tradition of Ecuador with the influences of contemporary art movements of other countries using his knowledge of European art techniques to create dramatic, large-scale oil paintings of indigenous Ecuadoran peoples and themes. In doing so, he combined Indigenism with European 'high art'. Through his painting of Indigenist themes and workers struggles, Camilo Egas is considered one of Ecuador's most recognized artists.

Born in 1889 in the neighborhood of San Blas near Quito's historic downtown, Egas showed an interest in the arts at an early age. Following his graduation from high school, Egas lived in the neighborhood of Sambiza in the outskirts of Quito for seven years. The Sambiza years are considered important for his artistic formation as an indigenist painter. Egas studied at the School of Fine Art in Quito from 1905 until 1912 with the French impressionist painter Paul Bar and the modernist sculptor Luigi Cassadio. In 1919, Egas went overseas where he studied at the Royal Academy of Fine Arts of San Fernando in Madrid on a government grant. He then studied in the Académie Colarossi in Paris for five years until about 1925.

﻿
In 1927, Egas moved to New York City, but occasionally lived in Spain and Italy, while making numerous trips back to Ecuador from time to time. He consecutively assimilated various styles: first, Social Realism, then Surrealism, Neo-Cubism, and finally Abstract Expressionism. In the 1930s, Egas's works in New York included several murals, with an Ecuadoran socialist theme, among them, Ecuadorian Festival (above), from 1932. Throughout his four stages of Egas' art career--Indigenism, Expressionism, Surrealism, and Abstract Expressionism--he always represented the cultures, history, and struggles of indigenous peoples.

During his years in New York, Egas taught at the New School for Social Research, becoming its first Director of Art in 1935. He taught and directed the art department there until his death from cancer in 1962--the same year the school awarded him an honorary doctorate in fine arts.