Over the past century or so Modern Art has often been propelled forward by what we've come to call "mixed media." Picasso comes to mind first and foremost for his introduction of extraneous materials such as newsprint, wallpaper, fibers, and other manmade items into his paintings. I also recall his famous bull's head made from a metal bicycle seat with bicycle handlebars welded to the rounded part to form horns. As photography freed art from the demands of representing real life in a realistic manner, artists embraced "art for art's sake" or simply art about art. From then on virtually any material and any technical craftsmanship such items demanded became acceptable when used in a creative manner to impart the artist's vision or message. Some such works fall under the heading of "conceptual art" in which the message dominates the work itself. Such work often raises the question, is it art or is it not?
Hungarian artist Agnes Herczeg would probably take offense at labeling her exquisite little creations (top) and the piece above as mixed media. They are, in fact, a happy marriage of tatting (lace making) embroidery, even macramé with the simplest, yet carefully chosen support of wood in its natural forms. Only now, in examining the photos of Herczeg's work did I realize than not one of her pieces bears a title (at least insofar as I've been able to determine). That makes her art difficult to discuss on an individual basis. She apparently considers that each piece speaks for itself, or perhaps invites the viewer into the creative process by adding titles themselves. In my case here, I'll take the first option and leave the latter to those seeing Herczeg's work for the first time.

Herczeg combines delicate lace art with branches of found wood to create scenes depicting the contemplative beauty of human-ity. This is not art for art's sake. The intricate portraits showcase women as they recline, sleep, and gaze as if into infinity. The wood serves as an anchor for their activities, a place where the characters rest their bodies, or the floor on which they stand. Herczeg also uses it as a striking visual contrast--the looseness of the lace and the solidity of the wood are at odds, but become harmonious when linked together. 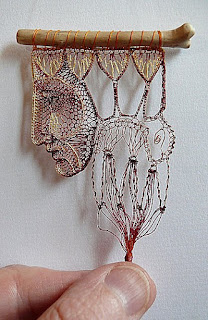 Herczeg’s lace sculptures are created using traditional techniques. She has extensively stud-ied the crafts of embroidery and lace-making, from needle lace to macramé. She incorporates a variety of these stitches into each composition. This proves to be a meticulous, detail-oriented endeav-or. Lace-making is an extremely time consuming occupation, taking several days just to complete even a small piece.
A sculptural delicacy. 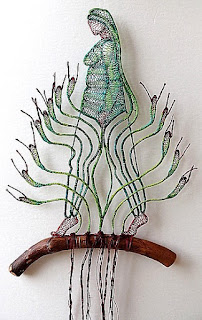 Because the lace art is so tedious, it’s vital that Herczeg has a well-thought plan for how to execute the work. “Design is a significant part of the creative process,” she explains, “ because I have to think through not only the visual appearance of the work but its overall structure and the order of the individual steps.” Despite the rigidity of her process, Herczeg's pieces reflect freedom and even spontaneity as the threads drape from the wood. 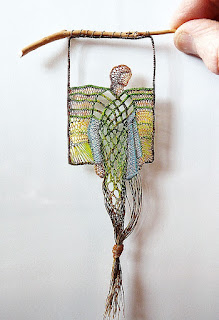 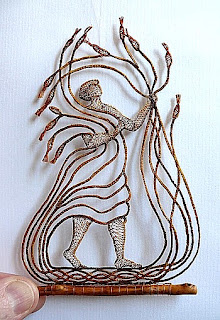 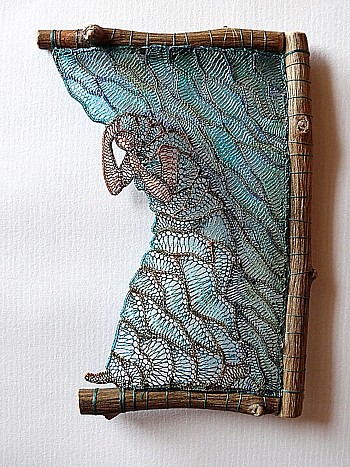