In line with my consistently popular series of articles having to do with individual wild animals and their frequent use as subject content even among artists not specializing in wildlife art, I began to ponder which animal I might highlight next. I quickly came to the conclusion that I'd already done those which were the most popular. I was down to consider snake art. You'd be amazed at what I found, both frightening and really quite beautiful (in their own way). However snakes have a bad public relations problem, so instead I decided on pandas, which seem to have the opposite problem--too popular for their own good--"aww, how cute." You'd be surprised at what I found here too; most such art being so cute as to be trite. 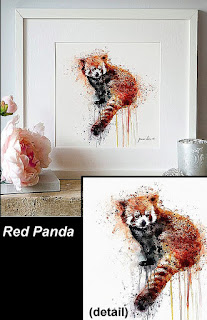 As you probably know, I tend to steer clear of the cute, cartoonish, or logo-looking "clip art." Very often that's why such animal art appears trite. Instead, I look for art which stands apart from the rest, even in the crowded field of "cute and cuddly." Abstractmusiq's Panda Bear (top) is a good ex-ample, despite the totally generic title. Marion Voicu (left) and the artist who created the eye-catching red panda (above) chose the lesser-known branch of the panda family tree which is not just smaller in size, but more importantly, more colorful.

Red Panda by
Marian Voicu
For those who might be wondering at this point if the red panda is more raccoon than bear, you're not alone. For decades geneticists have pondered the same question. They do, indeed look more like raccoons than panda bears and were once thought to be more related to skunks, weasels, and raccoons than bears. They're about the size of a common housecat. However, more recent exam-ination indicates they have a genetic family of their own which split from the Giant Panda family some two to three million years ago. A comparison of their ranges (below) suggests they're not prone to "family reunions." While the red panda bears only a slight resemblance to the more popular Giant Panda, there is, in fact, a third branch of the Panda family, the Quinling Panda (above, left). They're about the same size and have similar markings of the Giant Panda, except their fur colors are a shade of light brown and a sort of dirty white. They're relatively rare in the wild and apparently even more so where artists are concerned. It's a fur color combination artists appear not to care much for. I could find few (if any) paintings of this creature.

Inasmuch as the Giant Panda has become something of a symbol for the Chinese govern-ment, art, and other Sino organizations, perhaps we should give precedence to the manner in which Chinese artists have rendered this cuddly big guy (right).
﻿

Despite what virtually all artists (Chinese or otherwise) depict, not all pandas are cute and cuddly. While primarily herbivores, when attacked, or protecting her young, the Giant Panda can make itself a force to be reckoned with (above, left). So if you should encounter one in the wild, ask politely to share its bamboo, and watch where you step; some 90% of what a panda eats is almost immediately passed through its digestive system (they can't digest cellulose). Pollyanna Pickering's pandas (below) seem in the sharing mood. Notice that her watercolor is painted over a subtle background texture of Chinese characters.
﻿ 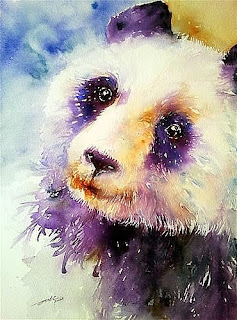 For those wishing to paint their first panda, the chart below features simplified pandas in virtually every possible pose. In painting them yourself, try for the unusual, avoiding a cartoonish rendering. God knows there are plenty of those on the internet; just cut and paste. Like all animals, pandas lend them-selves well to watercolors. See if you can do as well as Arti Chauhan (right).
Pansy the Panda,
Arti Chauhan
And for the "aww, how cute" crowd, check out the baby red pandas below.