A few months ago, I did a discourse on everyone's favorite color--blue. Judging from the number of "hits" it has had, it would seem to be one of my more popular posts. Therefore, today I'm going to delve into what seems to be everyone's second most favorite color--red. The color red is a warm and positive color associated with our most physical needs and our will to survive. It exudes a strong and powerful masculine energy. Red is energizing. Being the color of physical movement, the color red awakens our physical life force. It excites the emotions and motivates us to take action. It signifies a pioneering spirit and leadership qualities, promoting ambition and determination. It is also strong-willed and can give confidence to those who are shy or lacking in will power. It is the color of sexuality and can stimulate deeper and more intimate passions in us, such as love and sex on the positive side as with Georgia O'Keeffe's 1924 painting, Red Canna (above). Or it can denote revenge and anger on the negative side.
Although iron oxide pigments were one of the earliest colors known to the prehistoric artists, a case could be made that Raphael was the first artist in "modern" times to use red to any great degree as seen in his The Cardinal from 1510. Of course, when you're doing a portrait of a Catholic Cardinal, one doesn't have much choice in the matter. In more recent centuries, Henri Matisse gets his place in the timeline of painting because of his use of color. He did things with color no-one had before, and influenced many artists who followed. Matisse's Red Studio (above) from 1911, is important for its use of color and its flattened perspective, his altering of reality, and our perception of space. The painting is said to have been the result of Matisse's exposure to traditional Islamic art during a visit to Spain, which influenced his use of pattern, decoration, and depiction of space. About the same time (1907) in the midst of Picasso's so-called "Rose Period," he painted Seated Harlequin Seated before a Red Background, (below, left).
﻿

Harlequins and traveling performers were common subjects during Picasso's Rose Period. He identified strongly with these characters and their stories. He continued painting them throughout his career. A few years later (1946), Jackson Pollock with his Red Composition (below, left) managed to upstage a deep red ground by using overlaid fireworks of yellow and smears of blue and black. In May, 2012, Mark Rothko's 1961 painting, Orange Red Yellow (below, right) set an auction record for the artist. Christie’s New York sold the work, which had been in a private collection since 1967, for a total of $86.9 million, more than double its low range estimate of $35 – $45 million. And finally, in our own century (2008), we find our old friend, Peter Max, apparently floating on a sea of red with his Runner on Red Ver. II #2 (below).


Like the color blue, red is undoubtedly loved for its tremendous number of shades and tints. (A shade utilizes black while a tint uses white. My wife had to ask, so I'm guessing most people use the two terms interchangeably.) As the chart below illustrates, red is nothing if not versatile. However things get complicated when we start mixing popular names for reds and all their many manifestations with those color labels we find on tubes of paint. All (or most) of the latter are based on the various red pigments contained within. And like the blues, there are a surprising number of pigments commonly associated with red as used by artists down through the ages. Among those to be found below we have, Ercolano red, Venetian red, Minium (red lead), all the Cadmium reds, Napthol red, Red Ochre, Sartorius red, Indian red, and finally, Alizarin (this is not a comprehensive list). 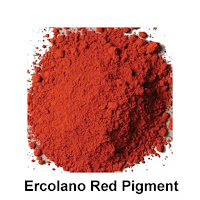 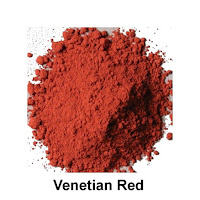 Venetian Red was used in cave paintings as well as by the Egyptians, Ancient Greeks and Romans. It's a light and warm (somewhat unsaturated) pigment that is a darker shade of scarlet, derived from nearly pure ferric oxide of the hematite type. Modern versions are frequently made with synthetic red iron oxide 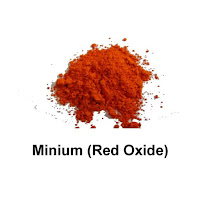 Minium, also known as red lead, is a bright orange red pigment that was widely used in the Middle Ages for the decoration of manuscripts and for painting. It was made by roasting white lead pigment in the air; the white lead would gradually turn yellow, then into an orange lead tetroxide. The color varied depending upon how long the mineral was roasted. Minium may have been manufactured in China as early as 300 B.C.

Cadmiums have the broadest range of hues derived from any of the inorganic pigment groups. These hues range from pale to golden deep yellows, light fiery to deep oranges through to light bright scarlets to deep reds and maroons. 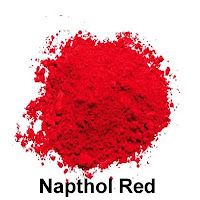 Naphthol Red is an organic pigment extensively used in automotive coatings and painting. It's a modern, warm red that closely matches Cadmium Red Medium in masstone. It makes for more intense tints, that are more transparent. It's excellent for high key painting. 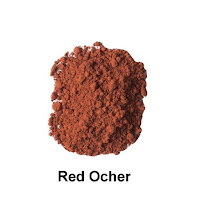 Red Ochre is particularly intensive. It is not unusual to find a layer of the cave floor impregnated with a purplish red to a depth of eight inches. The size of these ochre deposits raises a problem not yet solved. The coloring is so intense that practically all the loose ground seems to consist of ochre. One can imagine that the prehistoric cavemen regularly painting their bodies red, dyed their animal skins, coated their weapons, and sprinkled the ground of their dwellings. A paste of ochre was used for decorative purposes in every phase of their domestic life. 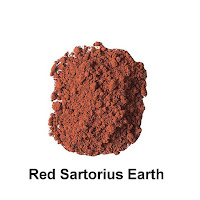 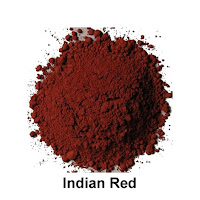 Indian red is a pigment composed of naturally occurring iron oxides widely used in India. Other shades of iron oxides include Venetian Red, English Red, and Kobe. Chestnut is a color similar to, but separate and distinct from Indian red. 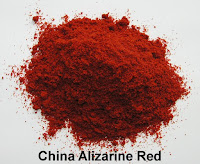 Alizarin dihydroxyanthraquinone (also known as Mordant red and Turkey red for obvious reasons) is an organic compound with formula that has been used throughout history as a prominent red dye, principally for dyeing textile fabrics. Historically it was derived from the roots of plants of the madder genus.


For the layman, the is probably more than you ever wanted to know about the color red. For the artist, such technical material may be of help in choosing which of the many red pigments to use, and may, in fact, save no small sum in buying. them.