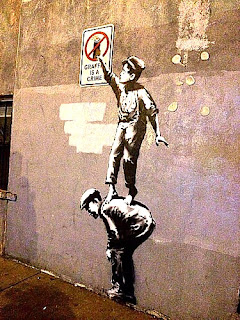 "Is Graffiti art or vandalism? That word has a lot of negative connotations and it alienates people, so no, I don't like to use the word 'art' at all." --Banksy

Banksy is an unknown artist who has become famous by being an unknown artist. His career has been marked by experimentation, risk, and a daring playfulness. His stencil-heavy motifs—of rats, cops, and kids with bal-loons—have simply become part of our shared cultural vocabulary, reproduced (and ripped off) with abandon. While it’s exceedingly difficult to narrow down a handful of works that define his aesthetic, I've highlighted below a selection of projects that have captured my jaded eye and the artist’s hugely influential practice.

Despite the often-seriousness of his messaging, Banksy has a healthy sense of humor. (The devoutly anonymous artist’s webpage, for instance, includes a photo of someone —purportedly Banksy—being sketched by an outdoor portrait artist, while wearing a ski mask.) A 2013 pop-up in New York City found Banksy offering $60 original stencil paintings near Central Park. As was noted at the time, it wasn’t surprising that most people walked right on by, since Manhattan’s sidewalks are littered with dozens of people selling Banksy rip-offs. It’s helpful to consider this episode as a self-contained performance art in its own right, and a commentary on value, celebrity, and site-specific context. Banksy reprised the concept, in a very different form, in Venice in 2019. There, he (or someone acting on his behalf) set up a street stall to peddle a series of oil paintings depicting the sort of cruise ship that is helping to slowly sink the city.

“People who get up early in the morning cause war, death and famine.” – Banksy

Banksy executed his first work in in the late-1980s. Since Banksy made his name with his trademark stencil-style 'guerrilla' art in public spaces--on walls in London, Brighton, Bristol, and even the west bank walls of Jerusalem--his works have sold for hundreds of thousands of pounds. He has dozens of celebrity collectors including Brad Pitt, Angelina Jolie and Christina Aguilera. After a year-long investigation by numerous journalists, London's Daily Mail named Banksy as Robin Gunningham. The search began with a photograph (above) taken in Jamaica showing a man in a blue shirt and jeans, with a hint of a smile on his face and a spray can at his feet. Taken in 2004, it was said to show Banksy at work. When the picture was published it appeared to be the first chink in the armor of anonymity with which the artist has shielded himself ever since his work began to attract the attention of the art world.

﻿Robin Gunningham was born in Bristol, England, in 1973, at the same hospital where he later had surgery for a cleft palette. When Robin was nine, the family moved to a larger home on the same street. It was there he spent his formative years and became interested in graffiti. A neighbor, recalls Robin's parents moving onto the street as newlyweds and living there until 1998. They have since separated. In 1984, Robin, then 11, donned a black blazer, grey trousers and striped tie to attend the renowned Bristol Cathedral School, which currently charges fees of £9,240 a year. It's hard to imagine Banksy, the anti-authoritarian renegade, as a public schoolboy wandering around the 17th Century former monastery, with its upper and lower quadrangles and saying his prayers in the ancient cathedral.

"There's nothing more dangerous than someone who wants to make the world a better place."--Banksy

Local authorities, who routinely had Banksy's graffiti painted over a decade ago, now recognize the value of his work. The local North Somerset Council said it was behind "Dismaland", mindful of a show in nearby Bristol that attracted more than 300,000 fans from around the world in 2009. "Welcome to Dismaland" and "Enjoy" was all they would utter, competing with each other in levels of insincerity. While not quite "The happiest place on Earth," "Dismaland" generated a buzz in the resort of Westin-Super-Mare, England and a lot of excitement from locals and Banksy fans worldwide. Britain's newest theme park, "Dismaland," opened with a decrepit castle, a merry-go-round horse set to be cooked and model boats on a pool full of refugees, all courtesy of British street artist, Banksy. The "Bemusement Park" is tagged as "The UK's most disappointing new visitor attraction!" and features work by other artists including Damien Hirst. "It's not a swipe at Disney," Banksy claimed in a press release. "I banned any imagery of Mickey Mouse from the site. It's a showcase for the best line-up of artists I could imagine, apart from the two who turned me down."
﻿

"Mindless vandalism can take a bit of thought." --Banksy
A Banksy painting titled Girl with Red Balloon was being auctioned at Sotheby’s in London. The spray-painted and acrylic piece depicted a little girl (below, right)extending her arm out for a heart-shaped balloon, floating far beyond reach. The bid-ding climbed to $1.4-million, an amount that tied the artist’s own auction record from 2008. Finally, a hammer pounded to signify the end of the auction. Right then, the painting’s canvas began scrolling down-ward, seeming to pass through its elaborate gilded frame--and reappearing below in neat, vertical strips. Later, Sotheby’s would explain that a shredder was hidden inside the frame. The crowd began murmuring as they realized what was happening. The painting was “self-destructing” before their very eyes. The incident spurred questions about how Banksy had pulled it off and whether he had been at the auction in disguise. Sotheby’s did not publicize who purchased the piece. The next day, Banksy posted a video to Instagram (below) that showed footage of a shredding mechanism being built into a frame for, presumably, Girl with Red Balloon. Did he anticipate that the critics would claim that the work, in its partially shredded state, would climb in value to at least $2-million or that the purchaser would not object and would instead rejoice? Sotheby’s senior director Alex Branczik said in a statement that described the incident, "It appears we just got Banksy-ed.”

Banksy-Sothebys-Shred-Oct-2018 from Brooklyn StreetArt on Vimeo.