What's your favorite color? The chances are it's not yellow. In fact, for many people yellow is their least favorite color. When people list their favorite colors, yellow is chosen by a mere 5% while some 42% of both men and women choose blue, followed by red, green, orange, brown, purple, and finally yellow. Gold (almost yellow) white, and silver round out the top ten. Why is yellow rejected by so many when it denotes youth, fun, joy, sunshine, and other happy feelings? With so much going for it, we might expect yellow to be a much more popular choice rather than hovering bear the bottom of the list. Perhaps it's because yellow can be anxiety producing as it is fast moving and can cause us to feel agitated. Yellow also has a tendency to make one self-critical as well as critical of others. 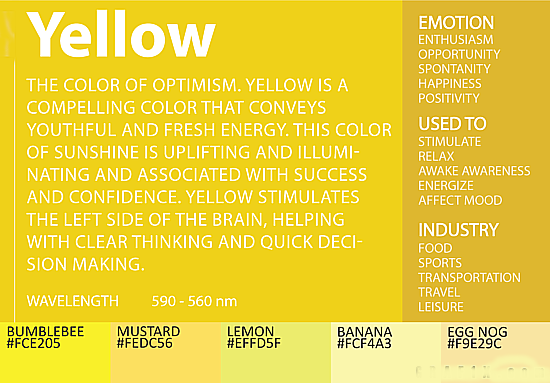 Yellow is the brightest color that the human eye can see. It is a cheerful and energetic color. The color yellow is often used for children’s toys and clothes. However, designers must be careful when using this color as it is often hard to read when placed on a white background. Although yellow is a bright and cheerful color, it can quickly become dirty and unpleasant, as it approaches the darker shades. When I taught students the art of color mixing, very often they were surprised to find that black, mixed with yellow, did not render them the expected "dark yellow" but various shades of olive green instead. The color yellow is related to learning. It is a color that resonates with the left (or logical) side of the brain, where it stimulates our mentality and perception. The color yellow inspires thought and curiosity and is creative from a mental point of view--the color gives us new ideas. The yellow helps us find new ways of doing things. It suggests a practical thinker and not a dreamer.
﻿Yellow is found between green and orange on the spectrum of visible light. It is the color the human eye sees when it looks at light with a dominant wavelength between 570 and 590 nanometers. In color printing, yellow is one of the three colors of ink used along with magenta and cyan, which, along with black, can be overlaid in the right combination, to print any full color image. A particular yellow is used, called Process yellow (also known as "pigment yellow", "printer's yellow", and "canary yellow") subtractive primary colors, along with magenta and cyan. Process yellow is not an RGB (short for, red, green and blue) color, and there is no fixed conversion from CMYK (short for cyan, magenta, yellow and black) primaries to RGB. Different formulations are used for printer's ink, so there can be variations in the printed color that is pure yellow ink. 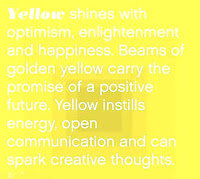 Because it was widely available, yellow ochre pigment was one of the first colors used in art. The Lascaux Cave in France has a painting of a yellow horse 17,000 years old. Ochre and orpiment pigments were used to represent gold and skin color in Egyptian tombs, then in the murals decorating Roman villas. In the early Christian church, yellow was the color associated with the Pope and the golden keys of the Kingdom, but was also associated with Judas Iscariot and was used to mark heretics. In the 20th century, Jews in Nazi-occupied Europe were forced to wear a yellow star. In China, bright yellow was the color of the Middle Kingdom, and could be worn only by the Emperor and his household. Special guests were welcomed on a yellow carpet.
﻿
When we think of the color yellow as used by famous artists from the past, Vincent van Gogh immediately pops into view. His golden yellow wheat fields and yellow on yellow sunflower paintings are nothing short of dazzling (the images here do not do them justice, by the way). However, the Impressionist (or Post-impressionist) Paul Cezanne was also lover of the color. Fellow Post-impressionist Emile Bernard lists the yellow pigments making up Cezanne's palette as brilliant yellow, naples yellow, chrome yellow, yellow ochre, and raw sienna (yes, that's considered a "yellow). Works such as Terrace at Cagnes, by Auguste Renoir (below) suggests yet another painter who was no stranger to the color yellow.
Likewise artists such as Pablo Picasso in his Horta de Ebro - Houses on a Hill, 1909, (below),  Gustav Klimt in his The Kiss (1908) some might consider it gold rather than yellow (It was, in fact, gold leaf). Salvador Dali (with his cold surrealist skies), Piet Mondrian, Georgia O'Keeffe (top), and many contemporary painters have all shown an affinity for yellows.