﻿
For many Americans today, World War I carries little meaning. It was simply the war which came before World War II. In a sense, that's true in that the Treaty of Versailles, which ended the First World War. sewed the seeds of German discontent leading to WW II. (The last veteran of the First World War died in 2009 at the age of 111.) Some time ago I wrote on the Panthéon de la Guerrea, giant, French, wall mural honoring those who fought in World War I as well as their leaders. Cut down, restored, and heavily "edited" it now adorns the Liberty Memorial in Kansas City. Except for Arlington's original Tomb of the Unknown Soldier (now containing the unknown soldier remains of three American wars), this country seems to have consigned World War I to the dusty archives of military history.
The brilliant American sculptor, Sabin Howard, is twenty weeks into his work on the final modelling stage of A Soldier’s Journey (top), which will eventually become the United States’ National World War One Memorial. The 60 foot long figurative bronze was approved for installation in Pershing Park, next door to the White House in Washington, D.C. by the U.S. Commission of Fine Arts last May. Until now, Washington has had no official monument to the sacrifice of the American armed forces in the Great War. Howard's wife, novelist Traci Slatton in her book, Truth Be Told, details the planning process as “a real trial by fire.” The project had to be approved by five different government agencies in Washington. At first, the Commission of Fine Arts wanted to block the sculpture, and Howard thought the proposal might be dismissed, but adroit political maneuvering persuaded its members to sway. His proposal moved from concept to approval in record time, taking only two and a half years. In comparison, the radical architect Frank Gehry’s proposal for his memorial to General Eisenhower had taken fifteen years to arrive at the construction stage.
﻿
﻿
Howard’s sculpture painstakingly tells the dramatic story of a soldier’s journey to war and his return home, arranged cinematically in a sequence of scenes, which seamlessly blend together. Reading the narrative of the sculpture is an extraordinarily emotional experience. First, we see the soldier’s daughter handing him his helmet, and his departure from his wife is a scene of outstretched arms and high drama; he is encouraged to stride forward into the ranks by an officer, then charges headlong into battle, which is cleverly sculpted as a moment of violent intensity where some of his comrades fall, either dead or injured. Shellshock is perfectly captured in the form of the soldier facing directly out toward us, interrupting the flow of action from left to right, and forcing viewers to consider not only the horrible death experienced by many of the soldier’s comrades, but also his own experience of surviving that horror. Staggering from the violence, he is supported by female nurses, asw we witness him among the men marching home with stars and stripes aloft, and, in a moment of true pathos handing his helmet back to his daughter in the final scene. Thus, Howard’s cathartic sculpture honors not only the dead heroes of the war, but also memorializes the commitment of the families who were left behind and the trauma of the soldiers who returned transformed by their awful experiences. It emphasizes unfashionable but honorable traditional values such as duty, self-sacrifice, service to the nation, and the family. Howard says it will be “a visceral experience” for the hundreds of thousands of people who will see it.
With the approval of the Commission of Fine Arts, the work of creating the full-size sculpture began. The figures were scanned from real-life military re-enactors, whose three-dimensional forms were captured using 3D photogrammetry at the Pangolin Editions foundry in Stroud, England. These scans were used to make full size 3D prints Of course, these prints are crude and lack the detail and vigor of a finished work, so they were shipped in a container from England to Howard’s New Jersey atelier, where he and two skilled assistants now work with their hands in clay on the final modelling stage. Howard says this stage will transform the scans, which resemble figures at Madame Tussaud’s wax museum, into real artistry.
﻿ 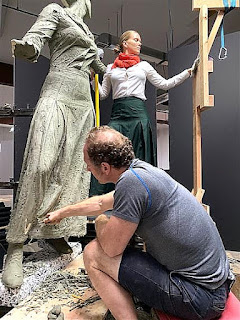 There is a personal family connection in Howard's work. His daughter Madeline is the model for the little girl who begins and ends the narrative, and his wife, novelist Traci Slatton, who is also the project manager for the sculpture, appears as a nurse in the parade scene. The narrative of the sculpture is based on Joseph Campbell's Hero’s Journey. Howard’s team has raised $35-million of the $40-million needed to complete A Soldier’s Journey. He is confident that the remaining funds will soon be gathered.
Model,  Evelyne Christina Tonn
posing as the wife and mother.


It has taken over three years of hard work to get to the point of having the full-sized 3D armature prints, Howard hacks at the foam forms with a long knife, tearing off unsatisfactory chunks of the sculpture, tossing them aside, then reworking the figures with clay, carefully examining his models, who pose for him in replicas of WW I uniforms, their arms propped up with two by fours. Once the full-sized sculptural model is complete, it will be shipped in sections to Stroud, England, where the bronze will be poured.
Sabin Howard was born in New York in 1963. His work has been featured in exhibitions at the Winfield Gallery and American Legacy Fine Arts as well as in articles for the ARTnews, The Brooklyn Rail and The Epoch Times. In his book, The Art of Life, which he co-wrote with his wife, Traci, Howard explores figurative sculpture from the earliest times to the present. In addition to his own work, Howard showcases the work of ancient and classical sculptors, including that of Michelangelo, Bernini, and Canova. The book also details Howard's clay-to-bronze process, his philosophy, and his drawings.