Now that we've explored all the primary colors--red, blue, and yellow--it's time to move on to the secondary colors--green, orange, and violet. And inasmuch as green is said to be everyone's second favorite color after blue, let's start there. Being a secondary color such as green, there are two different approaches available. The first is like that of the primary colors, the use of the natural pigments of that color. The second is quite different, that being the combining of various blue and yellow pigments to form some type of green. And since there are thousands of combinations and variations possible in doing so, this method is far more complex and far beyond the scope of this discourse. There is a third method, and one quite possibly used more often than not--the "adjusting" of a naturally green pigment with (usually) either blue or yellow pigments. The possibilities are endless, which means that doing so is also far too complex to deal with here. Let it be said, though, that many artists and connoisseurs prefer the latter two means of obtaining green hues. Therefore, in keeping things "simple," let's explore various green pigments.
As the "word cloud" at the top suggests, the color green is a relaxing color that is pleasing to the eye and is said to have healing powers. It is often used to represent anything that has to do with health. Many pharmaceutical and nutritional companies use a green color meaning in their logos and their material to advertise safe and natural products. Green is the color of nature and health. It represents growth, nature, money, fertility and safety. Dark green is often associated with the military, monetary, financial and banking businesses. The color green is full of balance and harmony. From a color psychology perspective, it’s the color green, that puts heart and emotions in balance, and equals head and heart. The green color is an emotionally positive color, which gives us the ability to love and care for ourselves and others unconditionally. As a natural peacemaker, green avoids the tendency to be a martyr. The color green loves to observe, is a good listener and counselor, and would make a good social worker. Green loves to contribute to society. It likes to work with charity and is a good parent and a helpful neighbor.
Explore green color meaning
As a combination of the color yellow and the color blue, the color green get its mental clarity and optimism from the yellow color, with the emotional tranquility and insight from the blue color. It gives more hope than any other colors. The color green has a strong sense of right and wrong, and a good judgment. It sees both sides of the case, weighs them up, and then take the moral and appropriate decision. On the negative side, the green color can be judgmental and overly cautious. The color green promotes love of nature, family, friends, pets and home. It is the color of people who love being in the garden, at home, or being a good host. But green color meaning can also be associated with being new or inexperienced. The color green is becoming a very popular color for new website designs. The words Shades of Green are synonymous with or represent various shades of the color green: apple, aquamarine, beryl, ​ chartreuse, emerald, fir, forest, grass green, jade, kelly green, lawn green, leaf green, lime, mint, moss, olive, olive drab, pea green, pine, sage, sap, sea green, seafoam, spring green, and viridian none of which are well defined. (some samples of which can be seen above).
Natural Green Pigments are an important part of any artist's palette. In such mediums as egg tempera and fresco they are indispensable. Green Earth Pigments are rare and often very weak in tinting strength and coverage. Mineral Green Pigments are often made from semi-precious stones. Below are listed some of the most common green pigments: 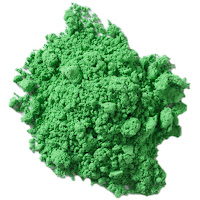 Phthalocyanine green is derived from phtha-locyanine blue by chlorination in the presence of aluminum trichloride. Due to the presence of strongly electronegative chlorine substituents, the absorption spectrum is shifted from that of the parent copper phthalocyanine. Phthalo green is highly stable and resistant to alkali, acids, solvents, heat, and ultraviolet radiation. 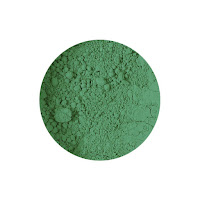 Viridian Green Pigment is transparent with good tinting strength, excellent lightfastness and high oil absorption with slow drying rate. It is stable in all media and has been used since 1900's. Toxicity is at a level B.
﻿ 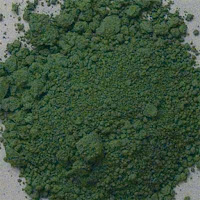 Chromium oxide (or chromia) is an inorganic compound which occurs naturally as the mineral eskolaite, and is found in chromium-rich tremolite skarns, metaquartzites, and chlorite veins. Eskolaite is also a rare component of chondrite meteorites. The mineral is named after Finnish geologist Pentti Eskola. 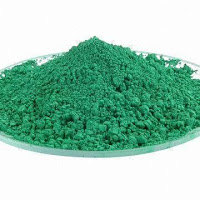 Cobalt green has a light fastness of 8 (graded 1-8) is weather resistant and non toxic. It is often used in paints, coatings, and plastic. 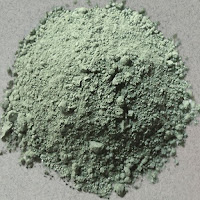 Tavush Green Earth is a greenish mineral of hydrated iron potassium silicate containing small amounts of aluminum, calcium, magnesium, sodium, and numerous trace elements. It is a bright green mineral that looks like tiny flakes of the mineral mica, or small lumps of clay. The color of glauconite varies considerably from pale green, bright green, bluish-green, olive-green, and black-green, depending upon its constituent elements. Tavush Green Earth is from the Tavush deposits of Armenia.

Virtually all artist have worked with various green tones. And like every other color, some love the color green and its broad versatility in rendering summer foliage and other plant life. By the same token, there are others who detest all greens for various visual and psychological reasons. Few artists, however have excelled in the mastery of greens as the Impressionists, who insisted upon the purity of their own formula for green (often variations of cobalt blue and cadmium yellow light).

Second only to his sunflowers and their inherent color of yellow, Vincent van Gogh seems to have loved the green derivative of yellow in every imaginable combination. In just over a decade he created about 2,100 artworks, including around 860 oil painting, most of which date from the last two years of his life. They include landscapes, still lifes, portraits, and self-portrait and are characterized by bold colors and dramatic, impulsive and expressive brushwork that contributed to the foundations of Modern Art. He was not commercially successful, and his suicide at age 37 came after years of mental illness and poverty. Some of his best landscapes depict the local wheatfields and Cyprus seen above.

In this iconic, indeed famous work, Matisse painted a portrait of his wife (right) with the two halves of her face in different colors, one approximating to flesh tones and other in yellowish greens. A green stripe sep-arates the two halves. Much has been written on this work, rightly seen as the opening salvo in the battle for modern art, and much is clearly untrue, e.g. "The Green Stripe is an embodiment of every-thing that Matisse himself and the Fauve movement stood for: the lyrical use of color to create 'an art of balance, purity, and serenity.'" Similarly, statements like 'His mastery of the expressive language of color and drawing, displayed in a body of work spanning over a half-century, won him recognition as a leading figure in modern art' also need to be seen in context.


Certainly colors are being used for emotional effect, but 'the green for jealousy' is an argument for naivety. Painters had developed a much more effective vocabulary by traditional means of representation. There is some balance in the work but there is no 'purity' or 'serenity'. The drawing is crude, and the colors are brash. The muddle in the center right has not been resolved: some heavy use of black was needed to continue the strong outline, but the muddy green of the background is most charitably called an improvisation, as are the other four panels when examined in detail, the purple, red and green of the background and the red dress. They are not attractive in themselves, and do not interact with any subtlety. 'Fauves', or 'wild beasts' was an apt term for work that intended painting to start on new foundations.
When asked where he learned so much about the jungle, Rousseau commented on his army years spent in Mexico; however, art historians agree that this was a fabrication. Garden plants and tropical vegetation combine in monstrous or eerily miniscule forms, sometimes overwhelming the unlikely characters around them. To the right, dressed as a woman of the times, the figure stands amid a stage-like jungle surrounded by overgrown houseplants and dwarfed by trees which grow oranges bigger than her head. Combining the extravagant and the miniscule is a major point of Magical Realist art. For Rousseau and landscape painters like him, greens, in all their manifestations were an integral part of their artist's vocabulary.