When I finished college and began teaching in 1972, all I had to do was fill out a state application and attach a transcript to obtain a license to teach students from Kindergarten through the twelfth grade. The first year I taught, I believe I had two high school classes and six seventh-grade classes the first semester, switching to six eighth-grade classes the second semester. It was an exceptionally heavy teaching load (especially for a rookie teacher) for which I earned a grand salary of about $8,000. I was born one of the first "baby boomers." I ended up teaching the very last of that demographic group twenty-two years later as the number of school age kids had started to decline. Believe me, I learned more than my kids did (I should have been paying them). Being an artist is one thing, teaching artists is quite another, especially from puberty on. Today, I think all would-be teachers (depending on where they live) have to pass a teacher competency exam. As much as things have changed in the past two-hundred years, sometimes it's surprising how much they haven't changed. When the Russian painter, Alexey Venetsianov, decided he wanted to be a portrait artist, back about 1811, he had to submit two works to the Board of the Academy of Arts in order to get a license just to call himself an artist (academician).
﻿

Although Venetsianov was actually a pretty good artists, he wasn't very successful in landing commissions. He painted mostly himself, his mother, sisters, and his wife(below). The self-portrait (above, left) was one of the two he submitted to the Academy Board to get his "painter's license." Some ten years later, about 1820, when Venet-sianov decided he wanted to teach art at the Imperial Academy in St. Petersburg, the door to that aspiration was sum-marily slammed in his face. He had no academic credentials. Though not tech-nically a self-taught artist, in that he had served an apprenticeship with an es-tablished artist for a few years, and had spent many hours copying paintings at the Hermitage, in order to become reasonably competent, such training in no way resembled that of the art academies of his time as seen in Venetsianov's Full Scale Class (top) from 1824. His Bathers (left) from 1829, shows evidence of his time spent in the Hermitage Museum.


Rejected by the Academy, Venetsianov, in turn, rejected the academic life, leaving behind a small group of student followers in St. Petersburg, for the village of Safonkovo, which, according to one source, he bought, and in any case, lived among its peasants, painting genre scenes of their daily life, landscapes of the area, and most importantly, many deeply insightful, sympathetic portraits of those around him. Threshing-Floor (below), from 1822, is one of his early genre works typical of those which brought him recognition at an exhibition in 1824 as the first Russian artist to depict rural peasant life. Another such example, That Is, those Father's Dinner (right), from 1824, of a peasant boy with an empty lunch pail, is sadly charming, even though the title is more than a little ambiguous.

Finding some success despite his lack of academic training, Venetsianov decided to reach for the top, trying his hand at the vaunted realm of the history painter. His Peter the Great, Founding of St. Petersburg (below), from 1838, is surprisingly adept for an artist having had no formal training or experience in such art.

Venetsianov's Communion of Dying (below), from 1839, exemplifies the deeply moving religious nature of some of the artist's later works. His Lamentation (bottom), from around 1846 is one of his final paintings. He died the following year in a carriage accident when his horses dashed off and fell down a steep slope.
﻿ 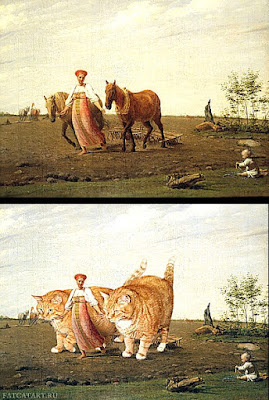