Yesterday I went on at some length about the personal bad habits involving how not to paint and draw. Today I want to delve into some of the bad painting habits. Though probably not so overriding as the personal bad habits, are nonetheless the difference between creating "good" art and perfectly "horrible" works of art. Some are little mistakes which might easily be overlooked if and when they occur in-dividually. The problem is, that's seldom the case. One error in judgment very often leads to a second, then a third, sometimes to a lengthy string of errors which can quickly move a work of art from mediocre or disappointing to the godawful category. Where possible, I'll try to show paintings and drawings which demonstrate such catastrophic denouements. You'll probably see some such errors you've made in the past. Michelangelo made a doozie, carving horns on the head of his Moses (left). He'd mistranslated "rays of light" to mean horns. I know I've made at various times, virtually ALL of the mistakes below. So, having done so, I'm something of an expert on this subject.
Bad Painting Habits--
1. Poor composition: Compositional errors tend to fall into three categories: cheesy/cutesy, boring, and unbalanced.

Cheesy/Cutesy--surprisingly, there are still students who attempt to create artworks containing hearts; glitter; prancing horses; leaping dolphins or bunches of roses. Usually such work comes from girls. I suppose, for the "tween" demographic, this sort of thing is to be expected, a sort of feminine rite of passage to be outgrown and cast aside by the age of 13.5. Unfortunately that doesn't always happen. It's more than just overly pretty, cliché and/or unimaginative subjects. That tends to fall under the heading of content. And, while the two often run side by side, compositions are more fundamental than content. The Internet is overflowing with adult, so-called, artists who seem irretrievably snagged on this compositional error. Decorating texts is one of many examples (though probably the most common). Just because medieval monks did it a thousand years ago doesn't mean it's okay today.

Boring--Even those who select appropriate common subject-matter such as portraits, are obliged as creative artists to make an effort to compose them in some innovative manner. Even highly experienced art students sometimes submit projects that make instructors want to yawn. By and large, amateurish painting techniques trump boring compositions every time. And just as bad, perhaps in some ways worse is the attempt to employ overly complex compositional arrangements far beyond those demanded by the artist's content itself or any instinctive ability to use them--something like trying to play poker with a deck of "Old Maid" cards.

Unbalanced--Every image, page and preparatory component of an Art endeavor should be arranged in a well-balanced, aesthetically pleasing way. My painting (above) of Granddad's Place is unbalanced in that the mass of the house on the right is less than that of the outbuilding and tree on the left. A small tree on the right was added later to improve the balance. Compositional balance can be a tremendous challenge for some, while seemingly intuitive to others. Nonetheless certain principles apply. For artists who dote on rules (and there are dozens of them), this is where they can excel. 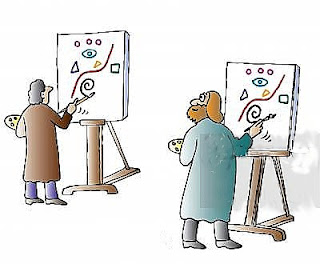