Anyone who has ever had the eye-opening experience of visiting a prison, or even a county jail, is immediately struck by one obvious impression--the near-total lack of beauty. We tend to take beauty, or at least an attractive impression, for granted here in the outside world. When we see drabness or ugliness, it something of a startling exception to that which we are accustomed. It's not that prisons today go to great lengths to create an ugly or unattractive environment, it's just that there is seldom any effort to create attractive appearance, except perhaps as a modest accommodation to the staff in providing a somewhat pleasant working environment. Even at that, the effect is, at best, institutional. Walls are often white, or a pale shade of blue, green, or tan. Floors are almost invariably tan vinyl or waxed concrete. Very often the predominant color is simply gray. This bleak setting is seemingly considered part of the punishment for the crimes. Yet, perhaps as a reaction to this effect on the part of the residents of such facilities, art happens.

Prison art is different from any other type of art. It's more intense. It is often desperate, desolate, negative, hostile, violent, angry, remorseful, ruthless, ugly, depraved, fearful, and sexually deviant. Of course, those elements show up to varying degrees in all art, but prison art is far more likely to display such negativism (above). Having said that, prison art also has some surprising elements in common with all art. It goes without saying that it can be good, bad, or indifferent. But it also has its share of humor (though often of a dark sort). It can be loving as well as lovely. Very often its quite sentimental and just as often deeply spiritual as well. Artists reflect their surroundings. Prison artist do likewise, though of course, those surroundings are much more bleak and, as I mentioned before, drab, even ugly. Perhaps most noticeable is a yearning for freedom; and in lieu of that, a personal struggle to find the hope, beauty, love, acceptance, recognition, and personal fulfillment common to all artists.

Some might find it surprising, but one of the main outlet for prison art is on the envelopes sent out by artists to family and loved ones (above). Here the range of quality, content, style, and competence is extremely broad form little masterpieces to crudely drawn sentimental hearts and flowers. Another surprising factor involving prison art is that, just as in the outside world, there in a financial element. No, prison artists don't usually sell their work for cash, but a nicely decorated envelope or hand-drawn and colored greeting card is often worth a pack of cigarettes, a couple packages of Ramen noodles, or a Honey Bun or two from the commissary. Sometimes prison artists simply enjoy the recognition and prestige their art affords them among their friends and friends of friends.

To their credit, penal institutions, by and large, encourage art within their walls, even among those with little outside training or previous liking for such a pastime. Some facilitate classes taught by the especially talented within, while others allow outside volunteer artists to teach classes. There are sometimes art shows (above) and large scale group projects such as the linoleum print project below. But doesn't that involve knives. Well, yes, but if you've ever cut a design into such a surface, you know that most such instruments would be fairly difficult to effect-ively weaponize. In any case, the management and use of sharp tools is carefully monitored.


Despite what I said in the beginning about beauty, virtually all prisons emphasize the spiritual evolution of those they house. Sometimes, that overriding emphasis results in some strikingly beautiful permanent works of art. Folsom State Prison in California has one such example, a mural painted almost eighty years ago depicting Leonardo's version of The Last Supper (below). Time has not been kind to the work. Paint is pealing, there is some water damage, and colors have faded appreciably, but its beauty continues to comfort and inspire those looking up at it from below. Despite its deterioration, the mural is in far better shape than Leonardo's original experimental effort.

Perhaps the most surprising (and best) prison artists are those with little to gain from there art. Thomas Silverstein, whose work appears below, is one such artist. Thomas is unique. The United States holds tens of thousands of people in long-term solitary confinement, but the case of Tommy Silverstein is perhaps the most extreme. He has been kept in isolation for the last 27 years, more than anyone else in the federal prison system. The intricate details of his case run deep into an abyss of psychological and moral debate. But what is most intriguing is Silverstein’s own reflections on the physical and mental effects of his many years in solitary and upon his own development as a self-taught artist and practitioner of yoga and Buddhist meditation. It’s not just the starkness and the raw emotion that his images conjure up, but also the story of Thomas Silverstein himself.

One might expect death row to be the last place you'd find a working prison artist. That's not the case. In January, 1993, Arnold Prieto and two others were arrested, tried, and convicted for the brutal robbery stabbings of an elderly San Antonio couple and their 90-year-old nanny. The robbery netted $300. Prisons change people. That's ostensibly their most fundamental purpose. Deterring crime, protecting the public, and punishing criminals is (or should be) secondary. As his art (below) suggests, Arnold Prieto changed during his time on death row. His crucifixion and intimate portrait of Christ are typical of nearly all of Prieto's work. Yet some crimes are so heinous that rehabilitation is not a moral option. Arnold Prieto died by lethal injection, January 21, 2015. 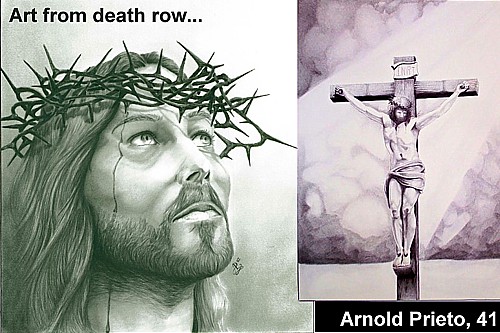