About a week ago I received an e-mail from a reader named Aleksey regarding a portrait of the U.S. President John Adams, which I'd used in an article in my "Presidential Portraits" series. He was inquiring about the copyright having to do with a Portrait of John Adams painted by John Singleton Copley sometime after 1783 (well before Adams became President). I wrote back:


"Have no fear, the portraits you spoke of are about two-hundred years old and thus well into the public domain. Wikipedia, by the way, has a good deal of information on copyrights. The standard copyright term [in the U.S.] is the life of the artist plus seventy years. Copley died in 1815, thus the portrait of Adams has been in the public domain since 1885."

Wikipedia does, indeed, have quite a bit of good information on copyrights (from which I've gleaned some essentials). However it also has what we Americans (and perhaps others too) term TMI (too much information), quite densely packed. Moreover, in that copyrights are a legal matter, much of it seems to have likely been written by and for our proverbial "Philadelphia lawyers." Adding to the complexity of copyright laws is the fact they are territorial while infringement and enforcement have become international. Worse still, many nations, such a France and Russia, have written into their copyrights statutes all sorts of exceptions having to do with military veterans. And on top of that, copyrights, even within a single nation, may have numerous variations having to do with different media. 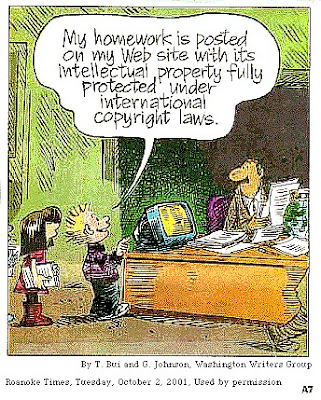 As a general rule, most copyright laws are aimed at books, recorded music, and motion pictures. As to art, in practice, they most often involve logos, story-book illustrations, and comic books. Copyright laws tend to follow a money trail. To a lesser extent, the same applies to paintings. Unless the artist is highly popular, and thus rich and famous, deriving substantial in-come from the sale of prints, artists' copyright laws bear, at most, a moral imperative (as in stealing candy from a baby). With few exceptions, copyright infringement is a civil matter, requiring the copyright holder to bear the legal cost of enforcement. That means most infringement suits are settled out of court, if indeed, they ever get that far. With today's high cost of litigation, even the threat of a lawsuit bears little weight beyond perhaps the removal of the protected material from public exhibition. I've been writing about art now for roughly eight years (almost 2500 posts) and to date, I've had only one artist ask that I cease using his work. On the other side of the coin, I've had several thank me for doing so. In art, there's no such thing as bad publicity, especially if it's free.


That's not to say artists are totally defenseless in protecting their work. Most such tactics involve Websites. Common practices in this regard involve posting only low-resolution images on websites, placing watermarks on internet images, posting copyright notices prominently and frequently, even to the point of threatening legal action. None of these are foolproof. All are easy to ignore or (with a little photo-editing skill) circumvent (above). Perhaps the best defense is a simple, polite request that anyone wanting to use a copyrighted image contact you seeking permission. Otherwise, even the most flagrant infringement will, in all likelihood, simply go unnoticed.


Coming from the other side of the street (so to speak), don't Infringe upon obviously copyright photo images. If you wish to paint from an outstanding photo while contemplating few (if any) changes, ask permission from the photographer and pay for the privilege if necessary. Quite apart from any legal ramifications (except in dealing with large corporations) infringement lawsuits are rare. However, as an artist (who likely also has work under copyright) seeking permission is simply the right and moral thing to do. But, having said that, the courts have long ruled that if the artist makes "substantial" transformative changes from the original source," then the work is considered new, and thus becomes the artist's own property. Combining two or more photos (especially the work of different photographers) would easily fulfill the definition of "substantial." On the other hand, cropping a photo and painting only a portion of it, does not. When it comes to changing art media (photo to a painting) the predominant color is gray. For all practical purposes, images shot by photographers who died before this date in 1947 (seventy years ago, though in some countries as little as fifty years ago) are now in the public domain (no longer under copyright).
﻿
Copyrights apply to a wide range of creative, intellectual, and artistic works. These include poems, theses, fictional characters, motion pictures, choreography, musical compositions, sound recordings, paintings, draw-ings, sculptures, photographs, com-puter software, radio and television broadcasts, industrial designs, plays and other literary works. Copyright laws do not cover ideas and infor-mation themselves, only the form or manner in which they are expressed. For example, the copyright to a Mickey Mouse cartoon restricts others from making copies of the cartoon or creating any derivative works based on Disney's particular anthropomorphic mouse. They do not, however, prohibit the creation of other works about anthropomorphic mice in general, so long as they are different enough to not be judged copies of Disney's. Strangely, Mickey Mouse is not copyrighted. Cartoon characters cannot be copyrighted. However, Steamboat Willie (Mickey's film debut) is copyrighted, and Mickey Mouse, as a character in that copyrighted work, is likewise protected (below).

Fair use is a doctrine in the copyright law that permits limited use of copyrighted material without having to first acquire permission from the copyright holder. The composite image above is an example. Other examples of fair use include commentary, search engines, criticism, parody, news reporting, research, and scholarship (as seen above). It's a complicated copyright limitation, but it's basically governed by four factors.

Inasmuch as I deal with art history and images which long ago have been deemed public domain, what I do would be far more difficult or impossible without fair use. For example, Willem de Kooning died in 1997. His work will not be in the public domain until 2067. In the meantime, the de Kooning heirs guard his copyrights very strictly. Wikipedia lists the fair use rational for de Kooning's Woman III below:
(Obviously written by a lawyer.)