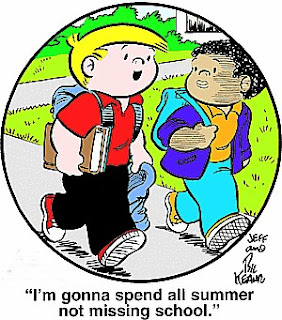 There are three major holidays in May--Mother's Day, Memorial Day, and May 27th (this year). We all know about the first two but the final one may seem ambiguous, not to mention variable, unless you're a school kid or a school teacher. Friday, May 27th is probably the most likely last-day-of-school this year. Although some schools run into June (for various rea-sons) I have it on good authority from a present day school teacher, not to mention my own twenty-six years of teaching experience, that summer va-cations still begin in May. For me, this annual "holiday" always ranked right up there second only to Christmas.
Speaking of holidays, the oldest May holiday is seldom celebrated in the United States, and hasn't been for over a century. The American impressionist, Maurice Prendergast (above) suggests what it was like back around 1901. May first (May Day) dates back to the period when European pagan holidays were being Christianized. Even in Europe today the first day of May tends to be celebrated more in Catholic countries than elsewhere. During the Communist era in Eastern Europe May Day was designated as a sort of military "show and tell" with parades and other propaganda hoopla.

﻿
May Day, it would seem, was replaced by Mother's Day, first celebrated in the U.S. in 1908. Other countries have somewhat different dates, some as early as March. Insofar as paintings honoring mothers, they came centuries before the holiday as seen the work of Raphael De Sanzio (above) from around 1505. He even went to far as to paint a pregnant mother-to-be. I wonder what he'd think of the most recent trend in Mother's Day paintings (below). My own effort honoring mothers centers on grandmothers, or perhaps in the case of Two Generations (top) great grandmothers.


Anna Jarvis of Grafton, West Virginia, is credited as the driving force in this country for the first Mother's Day as a memorial for her mother. Her campaign began in 1905 when her mother died. Unbe-lievably, the U.S. Congress rejected a proposal to make Mother's Day an official hol-iday in 1908, joking that they would have to proclaim also a "Mother-in-law's Day." They underestimated Anna Jarvis. By 1911, all U.S. states were observing the holiday. President Woodrow Wilson, in 1914, signed a proclamation de-signating Mother's Day, as a national holiday to honor all mothers (including mother-in-laws) on the second Sunday in May.

﻿
Undoubtedly the most common symbol of Mother's Day are flower bouquets or potted plants, which ties in with the bit about April shower brining May flowers. Moreover, when it comes to flowers, irrespective of Mother's Day, artists have long had a "field day" painting buds, blooms, and blossoms. Some artists, such as St. Louis artist, Naomi Silver, have found floral paintings to readily lend themselves to Abstract Expressionism as demonstrated in her finger painting May Flowers--Yellow (above).

﻿
Other artists, such as the father of Impressionism, Claude Monet chose the May-blooming red poppy as seen in his Poppy Flower Field (above), from 1871. Monet's painting ties in nicely with the other American May holiday, Memorial Day, though in fact, the Poppy connection has more to do with WW I and Veterans Day (once called Armistice Day) observed on November 11th. Memorial Day has it's genesis in the South following the American Civil War when various Societies for the Preservation of the Graves of the Glorious Dead were active. The observance spread north in the latter decades of the 19th century. I've included a painting equally appropriate for either date.
And finally, in contrast to both the 1915 poem "Flanders Field" by Major John McCrae, and the painting by Karen Winters, I would be derelict not to include perhaps the most famous May painting,The Execution of the Third of May, 1808 (below), painted in 1814 by Francisco Goya. The painting depicts an execution of masses of Spanish countrymen by French soldiers. There are more than eight French soldiers, with their faces turned away from the viewer, firing at a group of Spanish fighters at very close range. There is nothing subtle about this work. The painting is about 8 feet by 13 feet. In the left foreground are at least 3 dead men in a pool of blood that covers them and flows into the center of the composition. There is no commentary about what the painting might mean. Instead, it is a record, a painted description of the event. The central figure appears to be Christ-like. Spain and France both are, for the most part, Catholic; and there could be no greater hero than Christ. As the title would suggest, the element of time is quite important. Goya presents the figure in the act of being shot, along with the already dead men in the pool of blood and the long line of men who will be shot. Yet, the painting is timeless. It pays tribute to those who are willing to stand up for their beliefs, in spite of, aggressors who would try to destroy them. Though it shows the price of war for both the victims, as well as the aggressors, The Third of May, 1808 is not a war painting. Wars have rules. This is a massacre.