A little over a year and a half ago, I did a piece on celebrity painters. Among artists such as David Bowie, Marlon Brando, Phillis Diller, Bob Dylan, and Dennis Hopper, I showcased a little of the expressionist works by the comic actor, Jim Carrey. Among celebrity artist there are those who take their work quite seriously to the point of establishing for themselves a second career as an artist. The singer, Tony Bennett is an example. Then there are amateurs, such a Johnny Cash, Phillis Diller and others, look upon their art as more or less a hobby--something they do because it's fun and relieves the incredible stress of traveling and entertaining others. At the time, I would have categorized Jim Carrey as one of the latter, a man who used his creative skill at painting as a form of art therapy. Recently, however, I came upon the video, I Needed Color (below) which caused me to reevaluate Carrey as a serious artist, albeit one who has to struggle to find the time in his busy schedule to allow himself the much-needed benefits his "need for color" offers.


Although it may seem strange, Carrey being a comic actor, but like so many others with high-powered show business careers, Jim Carrey suffered from bouts with depression. Also like many others in his line of work, he turned to prescription drugs in an attempt to battle the symptoms of his disease. Eventually, however, that battle evolved into something even more dangerous as he found himself battling the drugs themselves and the effects they were having upon his lifestyle and career. That's when Carrey decided to return to a lifelong joy he'd found as a child in drawing and, to a lesser extent, painting. His art began to replace his reliance on drugs to combat his illness. It wasn't a cure, but his art became an effective treatment.

Jim Carrey was born in Newmarket, Ontario, Canada, in 1962, which would make him fifty-five years old. When he was around ten, his parents moved to Burlington, Ontario, for eight years, where he graduated from High School. He later claimed that if his career in show business hadn't panned out, he would probably be working today in Hamilton, Ontario, at the Dofasco steel mill. It was during these formative years that Carey first displayed a natural interest in art, along with his talent for entertaining friends, relatives, and neighbors with an even more prodigious talent for imitations.

Carrey explains that: "What you do in life chooses you. You can choose, not to do it. You can choose to try and do something safer. Your vocation chooses you. When I really started painting a lot, I had become so obsessed that there was nowhere to move in my home. Painting[s] were everywhere. They were becoming part of the furniture, I was eating on them. I found myself looking around at one point--a real bleak winter in New York--and it was so depressing. I needed color. I think what makes someone an artist is, when they make models of their inner life...mak[ing} something physically come into being that is inspired by their emotions...or what they feel the audience needs." 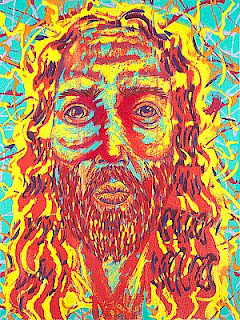 Jim Carrey is not a religious man. He claims to be an agnostic, not knowing if Jesus was real or if he ever lived. Yet such words start to fall flat when you take in the Electric Jesus portrait (right). Although uncertain as to what paintings of Jesus mean in a broader sense, Carry sees them personally as part of his desire to convey Christ's conscious-ness. Carrey's Electric Jesus is an attempt to render the feeling that Jesus is accepting of who we are. Carrey has tried to project from Christ's face every race and the ways in which each race imagines Him as one of their own.

Carrey is uncertain as to what painting teaches, only that it serves to free him, from the future, from the past, from regret, and from worry. Carrey needs this freedom, not from worldly cares (he's estimated to be worth in the neighborhood of $150-million), but from the stressful strain that comes with mishandled success, to which all too many of his fellow entertainers have fallen prey. He has all the trappings of success--at least three homes (below), cars, cash, friends, and family, but also the wounds of having endured several failed relationships and two Hollywood divorces. 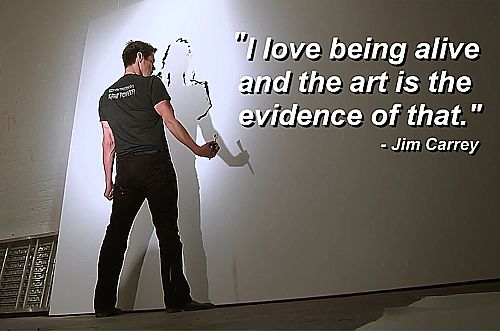